I love Joe Kubert Sgt Rock stories.  For one thing, it's always easy to tell who in Easy is going to die.  No cool nickname?  Not one of the regulars in the squad?  You're toast.  It's like wearing a red uniform in the old Star Trek.  More reliable than that, actually.

Another reason to love these kinds of stories is that Kubert doesn't go in for never ending plot entanglements.  In the golden days when I read these stories in single issues there would be several separate, distinct stories in a single issue, especially if you got an 80 page giant.  Concise story telling.  A lost art too often now.  And the thing is, a lot of those stories still stick with me.  I just noticed a small pile of the old comics I'd get as a kid where the covers had been ripped off and a bunch of them sold on the cheap in a pack.  Lots of those great old anti-war war comics.

Originally published in 2006 as a six issue series, I picked up the 2007 trade recently.  I'm fairly sure that Kubert could have told the same story in a single issue if he was so inclined, but he stretched it a bit.  It's a good story, mind you, but it filled out with more character exporation of the other guys in Easy than you would usually see in the old books.  A lot of that kind of character exploration would have been handled in a stand alone story featuring someone like Bulldozer or Ice Cream Soldier in those old books.  So even when Kubert was filling in extra story that might not be necessary to the main arc, he was still adding relevant information about his cast and not just tripping down some side road.

The story itself is a curious one, but it's the sort of off the wall I expect from Kubert's Rock.  A 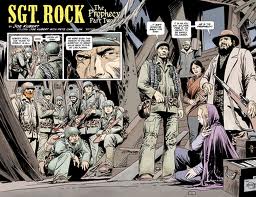 secret mission takes Easy from fighting in Italy to the Baltics to retrieve a prophecy that might shorten the war.  Of course, the prophecy is more like a Jewish messiah of sorts, last survivor of once burgeoning Jewish population in the area.  We have hard bitten partisans aiding Rock and Easy, with some questionable loyalties, or rather questions as to what they're loyal.  Nasty, betraying neighbors rear their heads, too.

After wiping out a good number of Nazis and losing the hapless new guys in Easy, we end up with a successful mission and a bit of a reminder for me.  When the prophecy is taken out by helicopter I thought, wait a minute, helicopters in 1943?  A little research later and sure enought there were about 700 of them in use during WWII.

Of course, a successful mission for Rock doesn't mean a shortening of the war.  It just means they got the guy out and he might shorten the war.
Posted by Thomm at Thursday, July 18, 2013