Lee: It looks like IDW is back on track because there are lots of good books this month. And, as always, it seems to be a good mix of reprints and new material.
Thomm: I’m not as much an IDW fan as Lee, but have found some good work there. 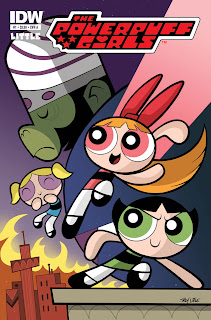 Powerpuff Girls #1 (of 5)
Troy Little (w & a) • Little x 4 (c)
Citizens of Townsville, fear not! The Powerpuff Girls are back! In this IDW debut issue Blossom, Bubbles and Buttercup are back to take down the meanest of the mean and the ugliest of the ugly! Plus, what fiendish secret is Mojo Jojo hiding? The answer is sure to surprise! FC • 32 pages • $3.99  Visit Troy here.
Lee: Wheee more retro action from IDW. First it was My Little Pony, now this… what’s next Care Bears? Aside from my apathy for the series, I bet girls (especially younger ones like mine) will love this. It makes sense in a broaden the market kind of way, but not for me.
Thomm: Not for me, but I enjoyed the animated series when my daughter was into that. Being 14 now, she’s not so much into it now. Burping, farting rednecks are more her amusement now. Makes this seem like Shakespeare.
Lee:  LATE BREAKING UPDATE!  I just remembered who Troy Little is!  He wrote the Angora Napkin GN a couple of years ago which was a ton of fun.  I actually did an interview with him which you can read here.  This went from *eh* to *interesting*. 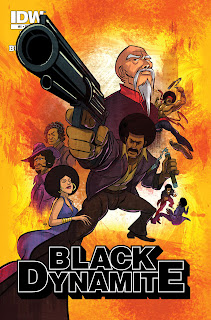 Black Dynamite #1 (of 4) Brian Ash (w) • Jamal Igle & Sal Buscema (a) • Dave Wilkins (c)
HE'S A POWDER KEG OF BLACK FURY THAT'S ABOUT TO EXPLODE! The baddest kung-fu cat to ever appear on screen is coming to comics so you suckers better duck! Former CIA agent, international ladies man, and sworn ass-kicking enemy of The Man… he's BLACK DYNAMITE—and he's about to walk into the most dangerous journey of his life! FC • 32 pages • $3.99
Lee: This looks and sounds fantastic. If you like silly over the top action I bet you will like this.
Thomm: I remember when the blackploitation entertainment was somewhat threatening to people. Now it’s just silly entertainment. I suppose the Know Nothings will be the same someday. 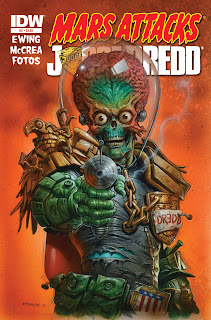 Mars Attacks Judge Dredd #1 (of 4)
Al Ewing (w) • John McCrea (a) • Greg Staples (c)
The Martian mayhem overtakes Mega-City One! During the annual meeting of the Mega-City Mafia, a new boss makes a play for power thanks to a mysterious benefactor. Meanwhile, Judge Dredd conducts a routine bust that turns out all but routine when he makes a shocking (and disgusting) discovery!  FC • 32 pages • $3.99
Lee: Now here’s a character mash up that I wouldn’t normally care about… except it’s written by Al Ewing. I’m tellin’ right now this will be good. Ewing is one of the best writers out there and it’s only a matter of time before he’s huge. Dumb idea. Great writer. It’ll be good.
Thomm: Sometimes a dumb idea leads to great results. This may be one of those times. 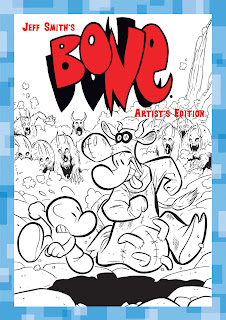 Jeff Smith's Bone: The Great Cow Race Artist's Edition
Jeff Smith (w & a & c)
Jeff Smith's Bone was launched through Cartoon Books in 1991. Winning 10 Eisner Awards (while being nominated for another 11), Bone is one of the most successful and critically acclaimed independent comic book series of all time. Now, IDW Publishing presents The Great Cow Race, one of Smith's most well regarded tales, in the award-winning Artist's Edition format. Featuring the entire Bone clan—Fone, Smiley and Phoney—as well as Gran'ma Ben and Thorn, and, of course, those stupid, stupid Rat Creatures! Don't miss what promises to be one of the finest Artist's Editions of the year! HC • BW • $75.00 net discount item • 144 Pages • 12" x 17"
Lee: Let’s get the obvious out of the way… I’m not getting this. The original material was in B-W so the only real reason to get this is too see it printed full size. That’s just not enough of a draw for me.
Thomm: I’m a recent reader of Bone so this is fresh in my mind. It’s a great story, and if you don’t already have the material, it’s well worth getting in this format, but if I already had it, I wouldn’t. 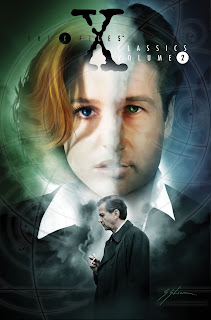 X-Files Classics, Vol. 2
Stefan Petrucha & John Rozum (w) • Charles Adlard, Miran Kim & Gordon Purcell (a) • Sam Shearon (c)
THE TRUTH IS… in here! Re-join up with Mulder and Scully as they unravel all-new mysteries only seen in comic books! This second collection includes stories like "Feelings of Unreality," "One Player Only, " "Home of the Brave," "Night Lights," and more. HC • FC • $29.99 • 200 pages
Lee: I missed ‘Classics Vol 1’ which is surprising because I can’t imagine why I wouldn’t have commented on this. Anyway, this is reprinting the old Topps series from ’95-’96. I’d probably pass if it weren’t for Rozum. He did the amazing Xombi series because when DC was still DC so I’m interested. The series managed to run for 41 issues, most of which he wrote, so it could be worth a look-see.
Thomm: By the time X-Files ended I was pretty well done with it. I haven’t had a great nostalgia for it since, either.

Thomm: An interesting selection again this month. Nothing screaming for me to get, but interesting.
Lee: This was gonna be a wait-n-see month until I figured out who Little was.  My girls may be getting the Powerpuff comic after all.
Posted by Lee at Friday, July 19, 2013