Indies Preview of September Part 2 of 2 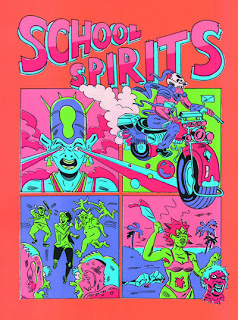 School Spirits HC by (w/a/c) Anya Davidson
School Spirits is Anya Davidson's debut book and could be described as like Beavis and Butthead meets James Joyce's Ulysses. It is the story of Oola, a high school student with an unusual connection to the supernatural. Comprised of four chapters, each deploying a different narrative technique, School Spirits is at once funny, sexy, mystical and, above all, utterly clear. Davidson's crisp cartooning style makes even the strangest occurrences seem utterly plausible.152 pgs, B-W, 8.5x11, $19.95 See preview pages here.
Lee: What can I say I have a weakness for psychedelically colored comic books. This looks to be a nut case of a comic and the previews support my opinion. The art reminds me of Mary Fleener a lot. So bottom line… it’s awesome and worth checking out!
Thomm: Utterly clear and Joycian seem like they can’t exist in the same concept. I’ll let you check this one out. 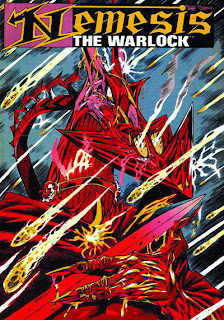 Rebellion / 2000AD
Nemesis the Warlock HC (deviant edition) by (w) Pat Mills (a/c) Kevin O'Neill
Termight, a world at the heart of a cruel galactic empire. Located deep in the bowels of the Earth, its inhabitants live in fear of their leader - the diabolically evil Torquemada. Determined to rid the universe of all 'deviant' alien life, the Grand Master and his army of Terminators are opposed by legendary alien freedom fighter, Nemesis the Warlock. Credo! 240 ogs, FC, 8x11, $48.00
Lee: I was doing so well avoiding big oversized, and over expensive hc’s this month until I got here. Nemesis is one of the best strips from the early 2000AD books and it’s been reprinted many, many times. It’s interesting that this version is colored, I wonder how the art will look? But, it’s a trippy book with insanely grotesque characters doing all sorts of insane stuff. It’s worth the price but if it’s beyond your budget I highly recommend the trade.
Thomm: So this is the not affordable entry. It certainly is that, but I thought we’d already seen unaffordable in this post. Plus, you’re on a trippy bent at the moment. Time to take your medication. 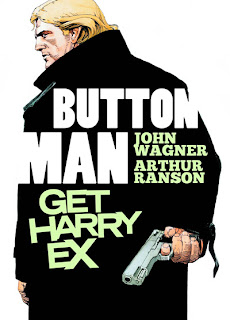 Button Man: Get Harry EX GN by (w) John Wagner (a/c) Arthur Ranson
The world didn't seem to need a man like Harry Exton anymore. An ex-soldier and mercenary, Harry was a human-killing machine without a vocation, until an old colleague told him about The Game. The players, known as Button Men, are paid to fight to the death in a modern-day gladiatorial contest. Organised by mysterious backers known as Voices, the killing game offers bountiful financial rewards - if you live. Harry decides to participate, but soon discovers that death offers the only way out! 304 pgs, FC, 7x10, $29.99
Thomm: Isn’t Button Man an actual term for a mob hit man? That doesn’t seem to be what this is about at all. Lots of killing, I’m guessing.
Lee:  This was from 2000AD so I am sure there will be plenty of killing.  In probably ever more inventive ways too!  For me, it's all about Ranson's art.  It's very realistic and just beautiful to look at.  Of course, with Wagner writing it's not like the story can be bad either. 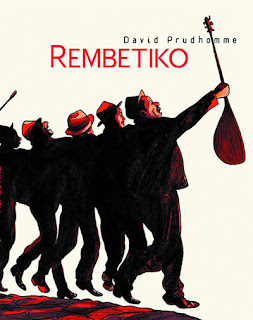 Selfmadehero
Rebetiko HC GN by (w/a/c) David Prudhomme
Rebetiko refers to the fusion of West and East, Greece and Asia Minor, in music. However, to General Metaxas, it is only a reminder of the Turkish influence on his country. The ruthless Greek dictator is determined to crack down on rebetis and their way of life. A small group of friends, Rebetiko musicians all, wind their way through the Athenian backstreets, ouzeris, and market squares, dodging the police while settling disputes over hashish and women. With music at its heart, this graphic novel portrays a day in the life of the Rebetiko musicians in Athens in 1936. 104 pgs, FC, 6.5x9.5 , $22.95
Lee: This certainly sounds interesting. Selfmadehero has been translating and publishing some of the better French comics for the last couple of years. I bet the art will be stellar and the story should be good too. It’s worth investigating.
Thomm: This is very interesting. The Greeks and Turks have been enemies quite possibly longer than any other two groups on the planet. That hasn’t changed much, NATO notwithstanding, but it was a lot more direct and violent in 1936 than it is now. 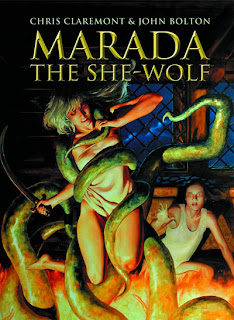 Titan Comics
Marada She-Wolf HC by (w) Chris Claremont (a/c) John Bolton
Marada has captured the imagination since her first appearance in Epic Illustrated in 1982. Descended of Caesar, and preceded by her legendary reputation as a warrior, Marada crosses the Roman Empire from adventure to adventure. Written by Chris Claremont and illustrated by John Bolton, Marada the She-Wolf collects the three Marada stories along with the never-before-collected story Wizard's Masque.112 pgs, FC, 9x12, $24.99
Lee: This is a relist, all previous orders cancelled. So, if you ordered it last time (like me) you need to order it again. OR, if you didn’t order it last time (like Thomm) then you still have time.
Thomm: I probably won’t but I’ll look out for it later. I’m patient. 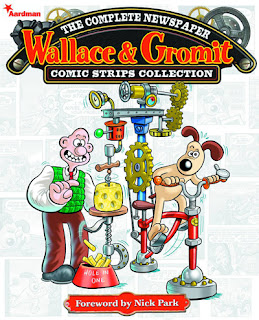 Wallace and Gromit Newspaper Strips Vol. 01 HC by (a) Mychailo Kazybrid
Foreword by creator Nick Park! This collection chronicles the adventures of that quintessentially British inventor, Wallace and his ever-helpful canine companion, Gromit. The strip, which appears daily in The Sun, the UK's most popular daily newspaper, is read by an audience of 2.3 million readers. The full-color strip features a self-contained, weekly-continuity that sees our plucky, bald inventor race from one hair-brained invention to the next with gusto, extreme silliness and more puns than you can shake a stick at! Collects the first 52 weeks - 311 strips which appeared daily from May 2010 to May 2011. 136 pgs, FC, 9x12, $14.99. You can see Kazybrid’s pencils for the strips at his blog here.
Lee: I am a huge Wallace and Gromit fan! I’ve loved the shorts, and the movies, and even the Shawn the sheep spin off. Now, finally I can get a copy of the newpaper strips. Hopefully they hold up but I can’t imagine they won’t. Actually, most likely I’ll have to fight the kids for this one.
Thomm: I’ve not always been enamored of animated work being translated to comics or comic strips, nor live action to those media, for that matter. I think they lose something. We’ll see how well this translates. 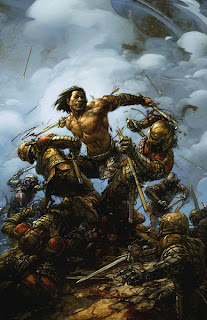 Valiant Entertainment
Eternal Warrior #1 (Crain cover) by (w) Greg Pak (a) Trevor Hairsine
Across five millennia and a thousand battlefields, Gilad Anni-Padda has traversed the darkest, most mysterious corners of the Valiant Universe. But the horror and bloodshed of constant warfare has finally taken its toll on the man myth calls the Eternal Warrior and he has abdicated his duties as the Fist and the Steel of Earth for a quiet life of seclusion. But when a blood vendetta from the distant past suddenly reappears in the modern day, he must decide if he will return to the ways of war for the child who betrayed him thousands of years ago... New York Times best-selling writer Greg Pak (Planet Hulk, Batman/Superman) and superstar artist Trevor Hairsine (X-O Manowar, X-Men: Deadly Genesis) launch a brand new campaign for Valiant's undying immortal champion, the Eternal Warrior, in an all-new monthly series! $3.99
Lee: Valiant continues to churn out good books. Granted this is the first issue but Pak is excellent at barbarian superhero stories (remember Planet Hulk?) and Hairsine is an excellent barbarian artist. There’s almost no way this could be bad.
Thomm: Eh. Seems a little confused to me. What child is this being pulled out of the hat at the end of the blurb? 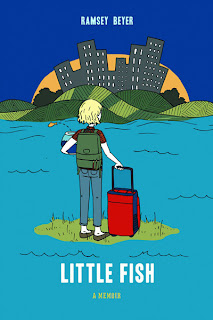 Zest Books
Little Fish: A Memoir HC by (w/a/c) Ramsey Beyer
Told through real-life journals, collages, lists, and drawings, this coming-of-age story illustrates the transformation of an 18-year-old girl from a small-town teenager into an independent city-dwelling college student. Written in an autobiographical style with beautiful artwork, Little Fish shows the challenges of being a young person facing the world on her own for the very first time and the unease - as well as excitement - that comes along with that challenge.272 pgs, B-W, 5.4x8, $15.99
Visit Beyer here and you can read her online strip here.
Lee: Let’s get to the important part, Beyer went to college in Baltimore Maryland. That’s right, this story takes place in the hometown of Comicsand…. That alone is worth the cover price. Beyond that, it looks fun and based on her online strips, Beyer has a pretty good command of the medium. If you like slice of life, coming of age type stories then you should like this.
Thomm: Hey, I liked the sound of this even before the Baltimore tie. It’s been a long time since my own college days, but it’s a great time of growth for a lot of people, and often an interesting story.

Thomm: A good selection, as usual. I’ll even concede that you didn’t go too far into the pricey this month. I think I’m seeing a trend in myself of less interest in super hero oriented stuff, even when it’s indie and not Big Two.
Lee:  Told ya I was going cheap this month!  Once you leave the capes behind it's really, really hard to go back.  If you think nothing changes when you read the books monthly, you will be shocked to see how little changes when you stop reading Batman (for example) for a year and go back to the same old plot lines.  There are plenty of other books to try so what's stopping you?
Posted by Lee at Wednesday, July 24, 2013