The Goon in A Place of Heartache and Grief - TPB 7

Frankie riding a Velveteen Horsey.  Do you need to have any other reason to buy this?  In a mere three pages Powell references My Little Pony, The Godfather, and The New Mutants, though that last may be me bringing something to it rather than Powell's intent.  That doesn't even get to the To Kill a Mockingbird reference a few pages later.  Such hilarity.  Such gore.  Such fun. 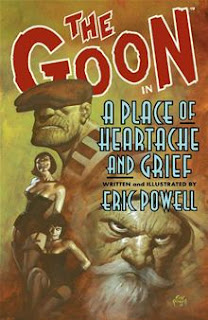 Actually, there's a lot of set up to this arc.  Not much resolution.  The chugs, as Frankie calls the Zombie Priest's latests creations, are still running around attacking Goon and others, but they're almost a background element.  Madame Elsa's burlesque house is somehow involved with the returned harpies and an even more mysteriously returned someone who looks like Labrazio but sure doesn't seem possible to be, considering his corpse is still occupying his coffin.  The order from which the Zombie Priest originates, and from which he was ejected for his betrayal of other members is now behind what's going on, I think.  They're certainly taking their pound of flesh, and then some, from the Zombie Priest.

What does happen is that Goon gets a new ride, Norton gets a new wife, Mirna is returning to Lonely St, and Momma Norton gets a gangland demise.  Powell continues to work one of the best constructed tales I've read.  Beyond the structure of the story and his pacing, he has fantastic art and dialogue that's to kill for.  In fact, Frankie has some of his best when he's killed something.  This book's best doesn't involve a killing, though.  Having discovered that the Harpies were returned to the ability to take human form when their magic gem was glued back together Frankie observes "Hmph!  You'd think magic would be a little more difficult than that."  To which Goon replies, "Just goes to show ain't nothin' as complicated as it seems."  Just so.

Did I mention Goon fights a giant transvestite?  Yeah, there's that, too.