Indies Preview for August Part 2 of 2 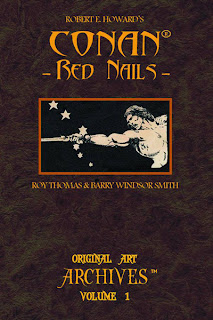 Conan Red Nails Original Art Archives HC by (A) Barry Windsor Smith
Forty years after its initial release, Genesis West brings you once again the classic 59-page Conan tale Red Nails, as adapted by Roy Thomas and Barry (Windsor) Smith. Scanned in color and presented at the size of the original art, this oversize hardbound edition faithfully captures the appearance of the actual pages as drawn in 1973. 136 pgs, FC, 14x19, $150.00
Lee: Yes, it’s another really, really expensive collection of art but this is one of the best! The is the peak of BWS Conan and this will be stunning. I just wish it were a little less expensive.
Thomm: A little less expensive? A lot less expensive. Then there’s the size issue. Pass. 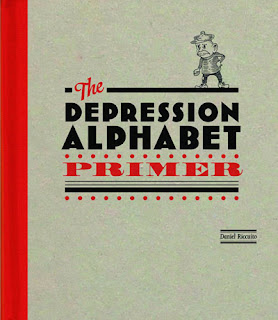 Gingko Press
Depression Alphabet Primer HC by (w) Daniel Riccuito (a/c) Tony Millionaire
As a precaution against tip-overs, he had to show his map at the peephole, even though he scrubbed the onions nightly on the agony box at the blind pig. As usual, valentinos were trading kale for juniper juice at the bar and putting the eye on tootsie rolls. Enjoy the colorful vernacular of a bygone era in this magnificently researched alphabetic guidebook to the slang of the 1930s. The words and phrases mirror the concerns and vices of the day with a myriad of colloquialisms. Typographic flourishes and illustrations by award-winning artist Tony Millionaire breathe life into the idioms and elevate this volume to the status of lasting tribute. 108 pgs, FC, 5x6, $19.95
Lee: If you like words and how they are used then this is the book for you! I think this sounds fantastic (and not just the art) because you really can learn so much about a period, and people of a period by the way they used the language.
Thomm: Now this is more my thing. I love words, getting my daily Word of the Day from Dictionary.com and all. Besides, the ‘30s was such an interesting period. People complain a lot now (in the US, anyway), but there’s nothing remotely resembling the hard times then in what we have now, and it was only going to get worse in the ‘40s. 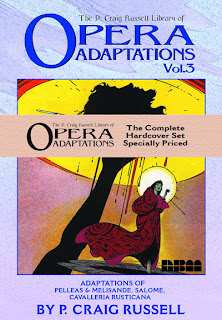 NBM
P. Craig Russell's Opera Adaptations Set HC
Combining three beautiful clothbound volumes into one elegant set, this collection captures classic adaptations in stunning comic art, from The Magic Flute, Richard Wagner's Parsifal, The Clowns from Leoncavallo's I Pagliacci, and Pelleas and Melisande to Strauss' Salome, Maeterlinck, and Dukas' Ariane and Bluebeard, and The Godfather's Code from Mascagni's Cavalleria Rusticana. Two songs by Mahler - The Drinking Song of Earth's Sorrow and Unto This World - are also featured. A set of 3 beautiful clothbound volumes at a special price. 440 pgs, FC, 8x11.5, $59.99
Lee: You can probably get most of these books from your local library but now is your chance to have copies that aren’t completely dog eared. Russell’s art is mind blowing and the stories… well, suffice to say they are classics. A fun collection for everyone.
Thomm: Throw on some classical music while reading and you’re all set. It is a lovely piece of work, and while people today are often bored by opera, the stories they tell are similar to comics in a lot of ways. Definitely take a look. 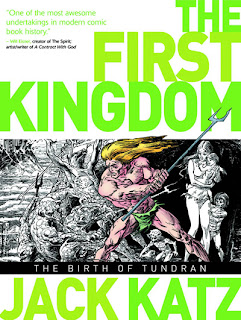 Titan Comics
First Kingdom Vol. 01 HC by (W/A/C) Jack Katz
The first in a series of six post-apocalyptic graphic novels, created by industry legend and heroic visionary Jack Katz! A true epic future history, following the fall and rise of humanity across a canvas of a thousand years, as they are reborn from the ashes of atomic destruction, become playthings of a new pantheon of gods, and, under the leadership of the heroic Tundran, strike out towards their destiny in the stars! The First Kingdom is presented here in a complete collectors' library for the first time, replete with cleaned and restored art taken from high-resolution scans of the original art pages, and completely relettered throughout. 208 pgs, B-W, 8x11, $24.99
Lee: First Kingdom is a weird little book. Katz is an amazing artist and he did all sorts of cool stuff with this book (no gutters, hyper detailed art) but it never sold well. That was because of publishing schedule (twice yearly) more than anything else. It’s considered one of the landmarks of creator owned comics. Problem is that I really don’t know if it’s any good. I know it’s visually amazing but the story… But for $25 it might be worth a first issue.
Thomm: The description of the plot isn’t selling me, so I’d want to see it before buying it. Could be a library read at some point down the road. 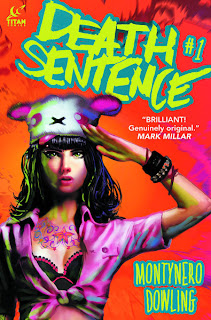 Death Sentence #1 (of 6) by (w) Monty Nero (a/c) Michael Dowling
That's the dilemma facing three people who've contracted the G+ Virus, a terrifying new STD. What can graphic designer Verity, failing indie guitarist Weasel and roguish media personality Monty do in the time they have left? Fade away - or go out in a blaze of glory? By turns funny, dark, sad and spectacular, Death Sentence is an emotional thrillride through celebrity, loss, passion and creativity. It's the jaw-dropping next stage in superpowered storytelling! Packed with unforgettable shocks, quotable dialogue and the character finds of a generation, this is an unmissable debut by two striking and confident new voices! 32 pgs, FC, $3.99
Lee: It’s got a girl in a fuzzy pink bunny hat!!! That sold me! As for the rest, it looks like a modern day Tank Girl so it should be interesting if nothing else.
Thomm: Love the name of the virus. 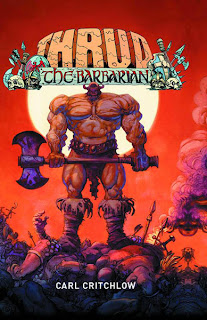 Thrud the Barbarian HC by (w/a/c) Carl Critchlow
The Eagle Award-winning barbarian parody series is collected at last! Thrud the Barbarian leads a simple life, one of popping down to his local pub, quaffing a few tankards of ale and starting a fight in which everyone else is beaten senseless. After which comes the wenches! Hurrah! Trouble is, there always seems to be someone with a quest to interrupt his peace, quiet and packet of crisps! In his first-ever collection, Thrud faces down a necromancer, protects his beer against fierce Frost Giants, faces his arch-nemesis, assumes the role of the king he accidentally killed, and gets his pint spilled on a mission into the depths of the jungle! 144 pgs, FC, 7x10, $19.99
Lee: Critchlow comes from the Bisley school of manly-man art. That means this will be full of huge biceps, huge breasts, and lots of blood and guts. From the reviews I read, it was pretty funny too! I ordered copy!
Thomm: A Brit barbarian. Perfect. Sounds like work is his arch-nemesis. 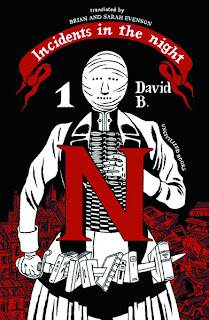 Uncivilized Books
Incidents in Night Vol. 01 GN by (w/a/c) David B.
David B. (Epileptic, The Armed Garden) sets out to explore the uncharted territories of overflowing and dusty shelves of Paris' legendary book shops. His journey quickly turns into an obsessive vision quest in pursuit of a mysterious 19th Century journal: Incidents In the Night. Mountains of books become sites of archeological digs as the author excavates layers of myth, fact and fiction in search of the elusive thread that links them all. Along the way he stumbles on fanatical Bonapartists, occult conspiracies, and the angel of death. Incidents in the Night is an intricate, ever-expanding web of dream and reality exquisitely translated by novelist Brian Evenson 112 pgs, B-W, 7x10, $19.95
Lee: David B. is an amazing artist/story teller and he hasn’t let me down in the 5 books I’ve read. Some are stranger than others but they have always been great reads. Of course, the art is spectacular too.
Thomm: I’m trying to get a handle on when it’s set. I guess at least in the 20th Century, if not the 21st. Are there Bonapartists around by then? Anyway, looks great and sounds like my kind of thing, what with the historical aspects and all.

Thomm: A nice selection here. A bit pricey and way too big on the Conan book, but all the rest look like a good selection for summer reading.
Lee:  We were late but I am sure your LCS can still get these for you!  Viva La Indies!!!
Posted by Lee at Wednesday, July 03, 2013