Interview With Emily Muto - Creator of The Way to Your Heart 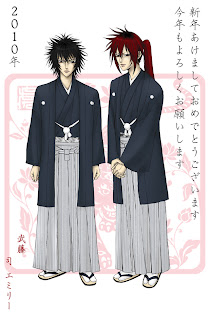 For those of you who were not readers back when I was a regular writer for Comics And..., I'd like to add a bit of an introduction. As much as I grew up with traditional comic books I find myself enjoying webcomics more and more as I get older. There's a lot of great work out there that's creator driven and often has an ending planned before the creator even starts posting. Also, with many webcomics you have a chance to have an ongoing conversation with the creator(s) through comments sections, emails, online forums and, in Emi's case, a shoutbox. I have a lot of fun reading webcomics and some of my best interviews have been from reaching out to the creators directly. If you haven't checked out some of the great comics available FOR FREE online, you should. Then, if you like them you can choose to support the creators directly without any middle man.

The Way to Your Heart (TWTYH) is a webcomic I started reading a over a year ago. I actually found it through another comic I read as Emi (Emily Muto) contributed a guest page while the creator of Red String was on hiatus. Her art work for Red String attracted me to her page and I have been an avid reader ever since.

Gwen: Tell us a little about yourself.

Emi: My name is Emily Wilcken Muto, I'm a Leo, a Mormon, a wife, and I'm obsessed with drawing. My mother says I'd draw on any piece of paper I could get my hands on ever since I was really little. I also love to create stories and have been writing since childhood. I used to draw primarily animals and write stories with animals as the main characters, but that all began to change when I was introduced to anime around age 10. My older brothers are amazingly good at finding interesting things, and one day they showed me Sailor Moon. It blew my mind--I'd never seen anything like it before. And I was hooked.
A friend at school introduced me to more series, like Ranma 1/2 and Tenchi Muyo, and we'd often have anime sleepovers and overdose on what was becoming an obsession. That's when I started to try to draw people, but I was conscious to not make them look too much like anime characters since I thought, being an American, it would be weird or wrong or something. Well, I gave up that line of thinking pretty quickly because I loved the art style and didn't care what others would think of an American girl drawing anime/manga-style characters. I soon got the hang of it and worked hard to develop my own style and improve my anatomy skills.

I started experimenting with comics when I was 12 and The Way to Your Heart came about after I'd been introduced to Japanese visual kei music. I wanted to create a story about a visual kei band, and since I couldn't find any at the time, I decided to make my own. TWTYH started out as a written story when I was around 16, and I began creating it in comic form just after finishing high school. I've been working on it since then and hope to be able to wrap up the story within the next several months.

Gwen: What is your favorite comic book and why?
Emi: The first thing that draws me into a comic is the art. Being an artist myself, it's what I naturally look for--sadly, if a comic doesn't have an art style that I find appealing, I probably will pass over it, even if the story is amazing. It's hard for me to choose one favorite comic for this reason. I love the works of Hiroyuki Asada, Takehiko Inoue, Takeshi Obata, Yuki Kaori, and Yuu Watase. Every time I see their art, it inspires me to work on my own!
Gwen: Why did you choose to make digital comics rather than print?
Emi: Probably because I got into online comics in high school and was inspired to go that direction with my own. It seemed like you could just put your stuff out there and it could instantly reach people around the globe! That thought was exciting to me, especially since I didn't have a clue about how to go about printing comics. It's been a quick and powerful way to get my work out there and to get my name out there.
Gwen: What are some of the challenges of keeping up with a digital comic book?
Emi: It's a creative process, and as with any creative process, it'll have its periods of inspiration and lack thereof. Keeping up a regular update schedule can be challenging, especially when inspiration is lacking, or when life keeps you busy and away from it.

Gwen: Your site heralds your story as being about life, love and visual kei. Can you give us a little background - what is visual kei and why write about it?

Emi: Visual kei (which means visual style) incorporates a lot of interesting and sometimes outrageous imagery with music, usually with intricate and flamboyant outfits, make up, and hairstyles. My favorite visual kei bands aren't just pretty to look at, they're also super talented and I've been able to listen to the same songs for the last 14 years and not get tired of them. I think writing about visual kei bands is interesting, especially when it's not a part of your own culture.
We have amazing rock bands in America, and most of them don't incorporate the visual style quite the same way as Japan does. That makes it unique for a Western audience, I know that a lot of people have been introduced to visual kei because of my comic. They've told me so, they've thanked me for that because they've discovered a new style of music they never would've known of otherwise. And that makes me really happy; being able to share something I love with others!
Gwen: Music (And not just visual kei) seems to play a big part in your story. Are you a musician or did you have to do a lot of research to incorporate music as such a big part of your story?
Emi: I played the violin for years and I *tried* to learn piano... I also love to sing, so I do have some musical background, but I wouldn't consider myself a musician. A lot of the really technical things you'd think would be included in a story about a rock band I try to just give subtle hints to because I don't feel familiar enough with all of the ins and outs of recording or producing an album...
As for research, whenever I go to a concert, I try to pay a lot of attention and take mental notes of what I see. From the stage set up, the amps, the lighting, the crowd around me, I try to take it all in so I'll be able to recall those memories and make the concert scenes in my story more realistic. My husband was in a band as well, so I've also asked him things from time to time. It would have been really interesting to have been able to visit a real recording studio, but alas... ^_^ I think for having a pretty limited knowledge, I've been able to pull it off in a believable way. At least, I hope so!
Gwen: Your characters make some very bold (and fun) fashion statements. Where do you get your ideas for all the great outfits?

Emi: Inspiration for the characters' outfits mostly comes from visual kei bands and Japanese street fashion. I also draw a lot of inspiration from designers like h.NAOTO and Sixh. Street fashion books like Fruits have been really helpful as well.
Gwen: Have any of your original story ideas changed as you've worked on the comic? (Sometimes I feel that characters that are well written can surprise even the creator with where they end up)

Emi: Oh, constantly!! With TWTYH especially, since I started it out just for fun, I really didn't have a solid direction or plan at first. It's been developing as I've gone along, and some certain plans I came up with years ago fell through and never made it into the story. It's kind of fun that this one's been so unplanned--sometimes I don't even know where it'll take me! It's like the story and the characters all have minds of their own and they let me know where they want to go, what they want to do. Sometimes the actions the characters insist to take really do surprise me, like when Yayoi decided to strangle Yumi... I was pretty shocked! ^_^;; I'd planned for her to do something far less violent, but Yayoi just wouldn't have it. That's just one example, there have been other instances with other characters/situations as well. Heheh, it keeps me on my toes and I love it!


Gwen: You indicated that you already have an end for TWTYH. So many comic books never really 'end'. Do you feel that an ending is an important part of storytelling?
Emi: Absolutely! An ending gives closure and satisfaction to both the reader and creator. I want to end this story so that I can have a sense of accomplishment for my efforts over the past 10 years, so that I can begin to think about new projects without TWYH constantly weighing on my mind.


Gwen: Do you have any plans for future work? Would you consider doing collaborative work or do you prefer doing both the art and story?
Emi: There are several story ideas I'd love to pursue after TWTYH. One in particular won't leave my brain--I'm pretty excited about it! I'd say more about this, but I'm trying to keep it under wraps for now. ^_^ And I've never really tried doing collaborative work before, but I can honestly say that I do love working on both the art and the story. I can visualize everything clearly when it's my own story and characters, I know how they're supposed to be portrayed. I'd feel like, if I worked with someone else, I wouldn't be able to accurately express everything, or it wouldn't meet the other person's expectations.
Gwen: Any closing thoughts?

Emi: Thanks for the opportunity to do this interview. I hope that it can be of some inspiration to someone out there who's interested in creating their own story or comic. The most important thing to remember is that it should be fun. If TWTYH weren't fun to work on, I wouldn't have kept it going this long. I'm grateful for my supportive husband and all of my readers who've enjoyed my work over the years. Thanks for the support and the positive vibes! I hope everyone looks forward to my future projects!


Thanks so much to Emily for the great interview! Please check out her comic - the link is below :)


The Way to Your Heart can be found here.