Is Marvel F*cking Over DC?

I’m getting less and less involved in the actual comic books and more and more I find the politics and workings of the big two to be fascinating. Like four blind men trying to describe an elephant I can only imagine what is actually going on because I’m not privy to any insider knowledge. From that perspective it does seem to me that Marvel is just plucking at DC and screwing with them at times for the hell of it. I say this because of two rising stars that DC had in their stable of writers but apparently did not feel it necessary to sign them to exclusive contracts. First up is Joshua Fialkov. He was dynamite on “I, Vampire” and based on what I read the trade sales were doing great. Like a Vertigo book of old this series could have survived with a little support and apparently made money with trade sales. Who knows what the digital sales were doing. In addition the constant cross-over into the regular DCU was at first a more horrifying prospect then actual vampires but Fialkov handled it so well that his Stormwatch appearance was the best that group was ever handled.


So what happens is that I first see his name on an Alpha mini-series over a Marvel. An almost try out book to see if Marvel likes his writing. DC strikes back and he gets a gig writing two GL books. Then the DC screw up happens and he walks off those books and is now writing Ultimates at Marvel. I can only imagine that as time progresses we will see him becoming a big star at Marvel and eventually parlaying his fame into some great creator owned material. 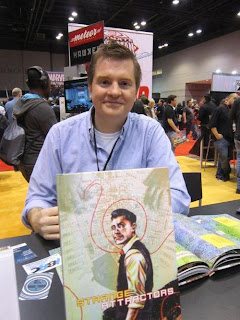 Next up is Charles Soule; he comes in and is writing Swamp Thing after Scott Snyder. Not only is he going a great job, it is a much better run then what Scott was doing with the character. Then when the GL thing with Fialkov goes to hell, DC gives Soule a GL book (Red Lanterns). Hell they have announced him on the Superman/Wonder Woman book. It sounds like Soule, who so far is a quality writer, is willing to be a company man and get what they want done. Good for him, no matter how big of an indy star you maybe, eating and a regular paycheck is a good thing. Of course I see that he is now writing Thunderbolts for Marvel. I can only imagine that this will piss off someone at DC and something else will go wrong and Soule will be full time at Marvel becoming a star with them.

Hell even older writers like James Robinson walks off from DC and next thing you know him and Waid are writing an OGN on Spider-Man. Diggle leaves and has a job with Dynamite and Image comics. If Marvel had not already run through their work with him, he would have bounced up at Marvel I’m sure.
I know the big two have gone away from exclusives, but I think if DC wants to go to the model of show runners and writers are just doing the scripts they need to make the writers employees. It only seems fair as I hear they are not paying anyone for rewrites of scripts. If they don’t it appears that Marvel is now using DC as a minor league for their writers. Let them cut there teeth at DC, see if they have the big league potential and they sign them up for Marvel books. Matt Kindt is doing a fair amount of DC work along with his great Mind Mgmt book at Dark Horse.


I remember when Brad Metzler was the big deal and Queseda was courting him to come and write for Marvel. It just seems too much like Marvel likes to just play with DC and if they ever step out of line, then just Marvel Now them to death and steal their top talent. Right now I know DC has Snyder signed to an exclusive and I assume they also have signed Lemire. They better sign up Soule and any other possible stars or Marvel will just continue to poach their writers.