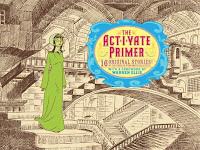 So, this week, in an effort to shut him uhhhh… I mean, discuss a small press book or too, I read The Act-i-vate Primer, published by IDW. The Act-i-vate Primer is a collection of webcomics that I picked up at the Baltimore Con. Webcomics aren’t my normal cup o’tea but all with all the creators there, I couldn’t pass up an opportunity to get a signed copy of the book. I freely admit I’m a sucker for a signed book. This book has turned out to be one of my best pick-ups at the con!

The Act-i-vate Primer is a collection of 16 stories from the Act-i-vate website. Now, like all anthologies, there are some stories that really worked, and some showed promise, but unlike most anthologies, there weren’t any that failed. What makes Activate so strong is the fact that these are all established creators. Act-i-vate is a place for writers and artists who have been previously published to try new things. Some of the highlights were: 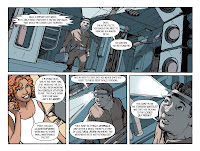 (A) “When Lilly Met Cosmo” by Simon Fraser. This is a straight forward science fiction serial and probably the most conventional of all the stories. Our heroine, Lilly, is traveling to deep space where she will be one of the few women among a large group of men. Along the way, she encounters some strange goings on, and a man who seems to know her, but she doesn’t recognize him! This is a very polished story that quickly introduces the characters and a couple of subplots. But that’s to be expected from Fraser. Simon is a Scottish artist who’s done tons of work for 2000 AD. He’s got a great clean line and I pretty much buy whatever his name is attached to. That tends to be mostly Nikolai Dante these days. You can see more of his work here

(B) “The Boy who came to Stay” by Roger Langridge. Langridge is by far the biggest name on the book because he most recently re-launched the Muppets for Boom! He’s not new to the business and is one of the best cartoonists out there. This story involves Mugwhup the Great who Langridge has been writing for years. It’s the same high quality humor that one expects from Langridge Visit Roger here 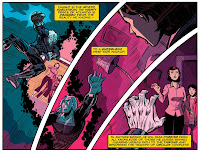 (C) “Veils” by Mike Cavallaro appears to be the beginnings of an action hero story. There are standard plot elements such as sibling rivalry over succession to a throne, but the ending really opens the story up. While I wasn’t thrilled with the start, the ending really made me want to what was going to happen next. Overall, the story is very polished and has great art. Mike Cavallaro is an accomplished artist currently working on “The Life & Times of Savior 28.” He’s also the author of 2008 Eisner Award nominated story Parade (With Fireworks). Visit Mike here

(D) “Bring me the Heart of Billy Dogma” by Dean Haspiel is the one risque story in the middle of the book. It’s not for kids and proves that these stories were written for adults. Visit Dean here 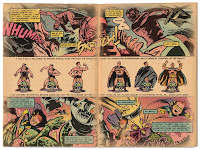 (E) “Memoirs of Kid Immortal” by Joe Infurnari which is a story about the quest for power and fame. It also made sure that there is a price to pay for such things. I’m not familiar with Infurnari but he turned in a great short story. He also set the pages up to look like an old comic book which was a nice touch. Visit Infurnari here 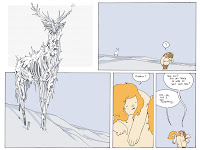 “Motro” by Ulises Farinas and “Persimmon Cup” by Nick Bertozzi were two very strong stories about people in science fiction settings. These two stories were more about people, or aliens, dealing with issues such as coming of age and the meaning of truth. They really stood out in the collection because there weren’t your standard superhero, or action hero fare. It didn’t hurt that each has a very distinctive art style that was incredible. Visit Farinas here and Bertozzi here

Believe it or not, there are still more stories in this collection. One of this books strengths are the variety of stories within. Some are science fiction, some are superheroes, some are just people dealing with weird situations but the diversity of the art and subject matter makes the book enjoyable.

A book like this presents problems for established creators because readers start with heightened expectations. I can easily say this book meets, and exceeds, any preconceived notions you may have! This is an excellent collection which combines good writing with even better art. For those that don’t have time to weed through all the web comics out there, this is a great way to see some of the best stories on the web. Highly recommended not only a book for your shelf, but as a way to find great comics on the web!

To read the stories, visit the Act-i-vate website here
Posted by Lee at Saturday, October 24, 2009