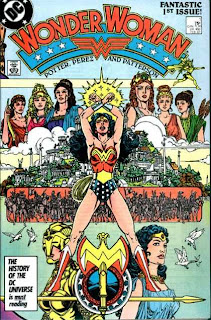 Coincidental to Jim's post on who's an A lister amongst comics super-heroes, I'm revisiting 1987 and the post-Crisis re-birth of Wonder Woman. While many find the John Byrne re-boot of Superman to be definitive of that character, and I certainly enjoyed the six issue Man of Steel, I've found this series to have held up better over time. George Perez's art has certainly stayed popular with the fans longer.
In the inside cover of the first issue, there's a little background from Perez about how he came to be on the book. What was originally a volunteer moment for a limited number of issues turned into a long term, open ended commitment. It was also vastly to the good of the book. The writer in the first two issues was Greg Potter, of whom I know nothing. Perez was the second bill as co-plotter and pencils, but that inside cover introduction was a sure foreshadowing of who would be controlling where this book went. By the third issue Perez had top billing as penciller and co-plotter while Len Wein came on as writer and co-plotter.
Wein was a noticable improvement to the writing. Potter's voice for the characters was less certain and often stilted. Wein, while still maintaining the "thees" and "thous" of the deistic speakers, had a more lyrical flow. From the third through the 13th issues, at least, this team worked very well. If my recollection is correct, and I'm too lazy to go downstairs to check, they kept going for quite awhile longer. I'm stopping at 13 because it's a good break in the arc(s).
In this version of Wonder Woman, the ties to Greek mythology are much strengthened from what they had been in the pre-Crisis Wonder Woman. Actually, Wonder Women, given the number of alternative Earths. Anyway, this Diana, Princess of Themescira (aka Paradise Island) is "born" of an all female population through divine intervention, though about 3000 years after her compatriots.
Though the writing is stilted the first issue's plotting is excellent. It gives the entire background story of the Amazons and the intitial appearances of Air Force Colonel Steve Trevor, as well as his aide, Lt Etta Candy. The Amazons are the creation of several of the Greek goddesses, as well as Hermes, about 3000 years ago. They are the souls of various women murdered over the centuries and collected for later revival. Hippolyte, the eventual queen, was the only one of the dead women who was pregnant when she was killed, and her dead daughter is kept behind when the other women are returned to life in ancient Greece. The goddesses intend for these women to serve as an example of proper worship of the gods and equality among men and women. Did I mention that the comic takes an avowedly feminist stance? Guess that's a little obvious.
Anyway, it doesn't work out well. Heracles, son of Zeus, leads an army to put the Amazons in their place. After some subterfuge, he and his army rape and pillage the Amazon's city. The Amazons in turn overcome their captors, after Heracles has left on another of his missions, killing them to a man. This leads to a schism among the Amazons. Hippolyte leads a faction that regrets the violence while Antiope, who had been co-ruler of the Amazons with Hippolyte, leads a faction that embraces the violence. Antiope and her faction leave and Hippolyte and her faction are offered immortality by the goddesses in return for living on a remote, mystically obscured island and serving as eternal guardians over demons imprisoned beneath the island. All that and the machanations of the War God, Ares, all within that first issue. A lovely wrap around cover to the issue, too. 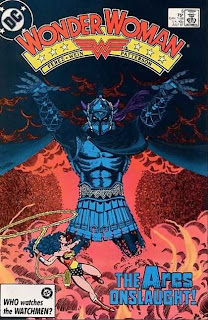 The next 5 issues contain the opening story and introduce the other supporting cast. Prof Julia Kapatelis of Harvard U and her early teen daughter, Vanessa, are the primary contacts with the wider world, being the deepest emotional connection Diana has there. They serve as conduits for her learning about 20th century Earth, both literal and figurative interpreters.
The battle against Ares involves both established mythical characters such as his sons Deimos and Phobos, but also newly created characters such as Decay. There's grave injury to friends and allies, including the death of one ally. In the end, that portion of the arc ends with Ares' defeat by indirect means, rather than a frontal assault, which would have failed because his power had grown to the point it exceeded that of Zeus.
Once that heavy lifting concludes, there's the healing of Diana and her return to Boston to 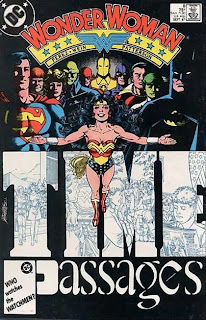 promote her mission of spreading Amazonian ideals. To that end, publicist Myndi Mayer is introduced, and used by Diana and Prof Kapatelis to forestall military dissemination about the battle against Ares. There's a nice little nod to the old Wonder Woman mythos when Mayer suggests Diana go by the name Diana Prince, so as not to be confused with Princess Diana of the English royals. Diana retorts that Princess Diana hadn't changed her name, so why should she?
That's part and parcel of the effort to set the DCU at this time in the real world. President Reagan is saved during the course of the fight against Ares. Diana is based in the actual city of Boston, rather than a city like Metropolis or Hub City. DC kept the fictional cities that were essential to some of its characters, like Batman and Superman, or the Question, because I guess they didn't want to insult a real city by depicting it in that state of decay, but the likes of Wonder Woman and Green Arrow took the Marvel path of involving actual American cities as a base of operations.
Of course, DC couldn't leave Wonder Woman out of the broader DCU for long. Issue 8 was an illustrated text rather than a comic, with 4 of the supporting characters writing what has been going 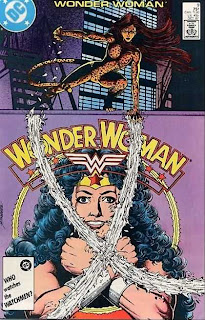 on in various aspects of Diana's life, which often involved the JLA and the like. In turn, issue 9 saw the introduction of The Cheetah, a long time foe of the previous incarnation of Wonder Woman, but with a different background. This Cheetah is a British archeologist of ill repute who uses a rare plant and the assitance of a diminutive, elderly, presumably African native to transform from the gimpy Barbara Minerva into the Cheetah. Minerva's intention is to take Diana's lasso, which, of course, fails.
The concluding 4 issues of this arc start with another wonderful 3 panel wrap around cover. Called "The Challenge of the Gods", Diana is set to a series of tasks, akin to the labors of Heracles, by Zeus. Zeus has been prodded by Pan to turn the Amazonian island into his personal brothel, with Diana being the first choice. When she refuses, she's sent into the bowels of the island to find her way through and prove her worth in opposing his will. Each of the gods is to set her a new task once she has completed the previous task. 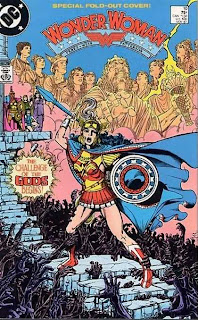 This arc explains how Diana came to be so named and her connection to Steve Trevor that pre-dates her birth. There's no romantic interest between Diana and Trevor in this version. While she's about 20 years old, he's about 47. Not that that would stop something from developing. But, if there's any hint of romantic interest, it's between Trevor and Lt Candy. Despite instructions to read the mega event Millenium, the story flows perfectly well without any memory of that event.
In the end, this arc discloses that Diana is named for Steve Trevor's mother, who crashed on the island after World War II and died heroically. It also reveals that Pan is not Pan but an imposter. Most troublesomely, it develops the hints of a romantic interest between Hippolyte and her centuries gone rapist, Heracles. I have a hard time believing that any woman is going to have any loving feelings toward her rapist, especially in a situation where she didn't really know her attacker prior to the attack. I could understand something of that sort if this were a man with whom she'd had a long romantic association that had turned badly, but a man she only knew one day before the rape and never saw again until 3000 years later? That's really stretching credulity. Of course, I'm writing this more than 20 years later, and Perez and Wein may have addressed that back then, but since I didn't read into the next arc's letter columns, I couldn't say right now.
Reading these old issues, I was reminded how much I miss some things, like letter columns in DC comics. Like The Question, Wonder Woman had some well written, well thought out commentary from its readers. Not the one or two paragraph fawning of much of the letters of the era, but lengthy discourses on the meaning and direction of the characters. It was not quite so erudite as The Question's letters, but for a more mainstream super-hero, it was highly entertaining and instructive.
I also saw the once ubiquitous Mile High Comics adds throughout these issues. I don't think I could have bought a comic back then without seeing one if their adds. Never bought anything from them, but it was like they were nearby, as often as their adds appeared.
Being a big fan of mythology, and particularly Greek mythology, this series was tailor made for me. In fact, it and Walter Simonson's Thor run are probably the best takes on mythical gods (or demigods) as super-heroes that I've read. When I get to Thor, I'll have to make a more direct comparison of how each holds up, but Wonder Woman will always have the plus of an Olympus that looks like it was designed by M.C. Escher. It's copying in one sense, but it's inspired to apply the physics defying optical illusions to a dwelling for gods. Intantaneously the image shows how apart from mere mortals these gods are, unbound by the rules of physics that govern our lives. I don't know if it was Potter's idea or Perez's idea, but if I had to guess, I'd say Perez, visual impresario that he is.
At least through these 13 issues, the series holds up well.
Posted by Thomm at Sunday, October 04, 2009