Jim: So the end of 2009 from a solicitation standpoint and DC finally has produced a hard cover collection of the Creeper by Ditko, let’s see what else they have.
Lee: More and more DC is starting to look like Marvel. There are still plenty of good books but the Big 2 are indistinguishable from each other at this point.
Gwen: I can't believe we're on December solicitations already. I feel like it should still be summer =/ 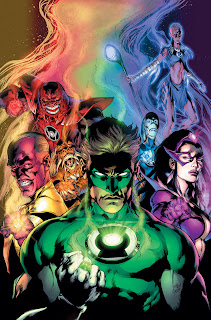 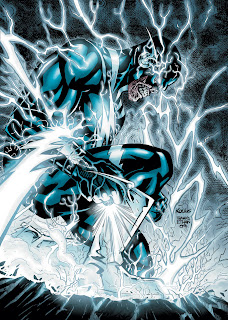 BOOSTER GOLD #27
DOOM PATROL #5
R.E.B.E.L.S. #11
SUPERMAN/BATMAN #67
TEEN TITANS #78
THE OUTSIDERS #25
JUSTICE LEAGUE OF AMERICA #40
Jim: DC fell into the event trap and have way too many titles that are tying into this event hoping to generate sales for certain books I’m sure. To me gimmicks like this never work, books just need great stories and great art and they will sell. Gimmicks never work long term. Not that I’m not enjoying Blackest Night, I am, I just don’t need 14 titles tying into it.
Lee: It was nice that DC was able to hold out as long as they did. But with Marvel dominating the market it was only a matter of time before DC followed. The real question is will DC produce it’s own version of Dark Reign that ties into every core book?
Gwen: Ah well, it was a good effort while it lasted - although, realistically, it was hard to see how this story wasn't effecting the rest of the universe. 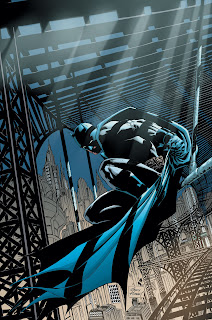 BATMAN 80-PAGE GIANT #1
Written by Steve Niles, Ivory Madison, David Tischman, Simon Spurrier and others Art by Chris Samnee, Clayton Henry, Marcus To, Saleem Crawford and others Cover by Andy Kubert
The BATMAN 80-PAGE GIANT features can't-miss action from some of today's premiere up-and-coming talent working on your favorite characters! It's the biggest blizzard of the year, and everyone in Gotham City is doing what they can to help. Find out what Batman, Robin, Alfred, Catwoman, Mr. Freeze, Veil, Poison Ivy and more get up to when snow brings Gotham City to a standstill!
ONE-SHOT • On sale December 16 • 80 pg, FC, $5.99 US
Jim: For a throwaway book this has some good talent. I will pick this book up.
Lee: I’ve always enjoyed one shots because it was up-n-coming artists. And with great writers this should be really good.
Gwen: This kind of looks like fun :) 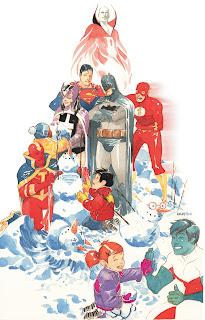 DC HOLIDAY SPECIAL 2009 #1
Written by Scott Kolins, Sterling Gates, Amy Wolfram, Fred Van Lente, Jay Faerber, Beau Smith, David Tischman, Jay Torres and others Art by Scott Kolins, Jeff Lemire, Daniel Liester and others Cover by Dustin Nguyen
It s that time of year! You t miss your favorite characters bringing good cheer to all. Even Deadman and wana Beast find ways to celebrate the spirit of the season!
ONE-SHOT • On sale December 9 • 80 pg, FC, $5.99 US
Jim: This I will not pick up, unless it is a very light week otherwise, the holiday stuff always comes across as the same stuff year after year.
Lee: It’s hard to come up with something witty after that Scroogey comment. And not Scroogey the Duck either. YIKES!
Gwen: Hoilday stuff is generally hit or miss - I think it usually works better on TV. 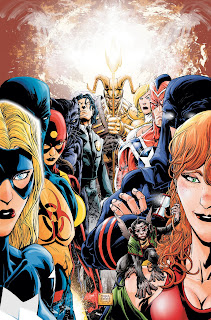 JSA ALL-STARS #1
Written by Matthew Sturges
Art and cover by Freddie Williams II
Variant cover by Ryan Sook
An all-new ongoing series! The Justice Society spin off group struggles to pull itself toward some semblance of order after the s devastating split! New home base, new training methods, new villains all bringing the JSA All-Stars face-to- face with one of their greatest villains again for the first time! Join writer Matthew Sturges (JUSTICE SOCIETY, JACK OF FABLES) and artist Freddie Williams II (ROBIN) for a new chapter in the JSA legacy.
On sale December 2 • 40 pg, FC, $3.99 US
Jim: I love the JSA, so I’m always happy to see more of it. I hope that they use this book to give more spotlight to some of the underused characters.
Lee: This looks to be a fine title but I take it as another sign that DC is just like Marvel. Pretty soon, we’re going to have 4 JSA titles to go along with the 4 Superman titles and 4 Batman titles. The only character without multiple titles is Wonder Woman.
Gwen: I think it's a good idea to have another JSA title because half the time you don't even see some of the characters. Still, the Legion is an even bigger team and all they get is a back up story. 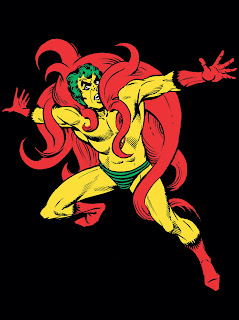 THE CREEPER BY STEVE DITKO HC
Written by Steve Ditko, Don Segall, Dennis Neil and Michael Fleischer Art by Steve Ditko and others
Cover by Steve Ditko
Steve Ditko, co-creator of Spider-Man, struck again in 1968 with the strange hero The Creeper. Now, for the first time, DC collects Ditko s Creeper epics from SHOWCASE #73, BEWARE THE CREEPER #1-6, 1ST ISSUE SPECIAL #7 and short stories from WORLD S FINEST COMICS #249-255.
Advance-solicited; on sale February 24 • 256 pg, FC, $39.99 US
Jim: I have been dying to see a hard cover of this material. Now it has no information on format, which would be nice, but I’ll take it. Of course I wish we would get Hawk and Dove, Shade the Changing Man also out of DC. I love Ditko and almost can’t have enough of his work – almost.
Lee: I’m really excited about this too. And, we’ve talked about it before but I like the lower paper format on these books. It fits the material (and my memories of the material) perfectly. I’m all for the shiny high quality paper Archives reprints but I these are just perfect.
Gwen:I'm glad you two are excited but I was never all that into the Creeper. Ditko's work is definitely well done I just don't care for the subject. 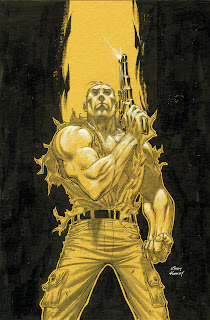 DOC SAVAGE: THE SILVER PYRAMID TP
Written by Dennis Neil Art by Adam Kubert and Andy Kubert Cover by Andy Kubert
Classic pulp fiction hero Doc Savage stars in this fast-paced tale featuring early work by comics superstars Adam Kubert and Andy Kubert, collected for the first time from the 1987 four-issue miniseries. Doc and his rugged band of assistants are introduced into the modern era as retired heroes and now, on the eve of an alien invasion triggered by a gang of would-be world conquerors, only Doc Savage s grown grandchild, Chip, can set things right. But is Chip, a self-professed pacifist, up to the task?
Advance-solicited; on sale January 13 • 128 pg, FC, $19.99 US
Jim: If memory serves this was not that good and you can probably buy the mini-series on E-Bay for $5 or less.
Lee: Funny, I had the exact same thought. In fact, I was looking at my copies of this just the other night and trying to decide if I should sell them on ebay! I didn’t think I could get $5 for them so I passed.
Gwen: Chip? What a horrid name.
Jim: Geez, now Gwen went and insulted my buddy Chip Mosher at BOOM. 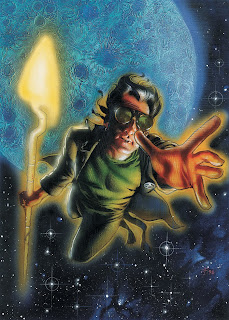 THE STARMAN OMNIBUS VOL. 4 HC
Written by James Robinson and Jerry Ordway
Art by Tony Harris, Gary Erskine, Matt Smith, Leonard Kirk, Gene Ha, Mike Mignola and others
Cover by Tony Harris
Jack Knight s groundbreaking adventures continue as Starman teams up with Batman and Hellboy, then heads into space to find lost hero Will Payton. Collecting STARMAN #39-46, STARMAN 80-PAGE GIANT #1, THE POWER OF SHAZAM #35-36, STARMAN: THE MIST #1 and BATMAN/HELLBOY/STARMAN #1-2.
Advance-solicited; on sale February 17 • 432 pg, FC, $49.99 US
Jim: I’m very happy with how this series has been packaged and look forward to having the entire run in hardcover.
Lee: Great books. Great run. This is just fantastic stuff.
Gwen: Ah, Starman. I still haven't finished reading the trades but they're on my stack of books I need to read. Sadly school interferes with fun reading.
Part 2 Tomorrow
Posted by Jim at Wednesday, October 28, 2009