Lee: WAHOOO! Indies is back to full strength. After a couple of months of slim pickings everyone must be gearing up for Christmas and the new year because there are lots and lots of things to look at this month.
Jim: I don't think it is Christmas because with the lateness of things most of these books will be coming out next year.

Adhouse Books
Afrodisiac HC by (W) Brian Maruca (A) Jim Rugg
The crew behind Street Angel hits the ghetto with the Afrodisiac, in SuperColor! There's cats, gats, spats, and feathered hats, action as big as a Georgia ham and wool so fine it'll blow your mind! Lock up your daughters, come hell or high water, cause here comes the king of the concrete jungle! 96 4C pages, 6" x 9", $14.95 Visit Jim Rugg here and look at all the pretty art samples. Read his blog here which is equally excellent!
Lee: Adhouse never has many offerings but the ones they do tend to be very good. Of course, this looks to be a great addition to any collection. The art looks great, the story seems perfectly over the top for the material. I’m sold. It doesn’t hurt that Rugg is a proven commodity since he was the artist on Street Angel which was highly acclaimed.
Jim: I got tired of the book from Image called 76, that was about the seventies and this material is too much of that type of stuff. Just not my bag, can you dig it?

Albatross Exploding Funny Book
Chimichanga #1 by (W/A) Eric Powell
Eric Powell, creator of the award winning series The Goon, brings his offbeat humor and distinctive style to his newest creation! A story fit for youngsters, Chimichanga tells the tale of a bearded girl, her less than spectacular traveling circus, and a bizarre creature that turns their lives upside down. Discover Powell's first written and illustrated creator-owned series since The Goon. #1 of 3, $3.00
Lee: It’s an Eric Powell side project. What’s not to like? It may not be Goon but I’ll take it!
Jim: Exactly, an Eric Powell project is pretty much a slam dunk, especially for a $3 price tag. The artwork alone is enough to say yes. 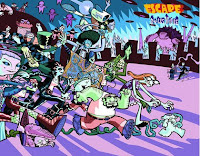 Amaze Ink/Slave Labor Graphics
Escape from Dullsville SC by (W/A) Andy Ristaino
Lee: Ok. So, I liked this and contacted Andy who gave me much better information... the new, and Comics And.. exclusive Hype is much better! "Something born of extraordinary circumstances tends to allow for more incredible circumstances to happen. And such is the case when a claustrophobic fetus, tired of it's surrounding, decides to take an early exit and Escape Dullsville. Soon this young "tabula rosa" becomes embroiled in the plots and schemes of the likes of little green men, mad scientist puppets, government cover-ups, jet packed babysitters, strange cults, anarchists, beatniks, psychotic magicians, truckers, and crazy mothers, as it goes on the most wigged-out of road trips through the good ol' U.S. of A." 288 pgs, $19.95 Visit Andy here
Jim: You know if I had an extra $20 I will be all over this, the cover alone make you laugh and the premise sounds very funny.
Lee: Now I picked this, wrote Andy, and then got caught up in other things. Which means, Jim responded before I could add ALL the cool hype that Andy sent me.
Andy also provided this...
"escape from dullsville" is going to be a 288 page graphic novel containing issue 1-7 of my slg comic called "life of a fetus" that was originally published from 1999-2001. the book will also contain over 80 pages of previously unpublished work, including the 41 page issue 8, which i had stopped working on back in 2001 due to carpel tunnel issues with my hands, a bunch of comics featuring dr. otto and little billy (they are supporting characters from the book, even more comics that take place and expand the universe a little, character bios, plenty of sketches, and spelling corrections!. it won't be oversize but will be 5.5 x 8.5 so a little smaller than a regular comic but bigger than a book of manga.
288 pages for $20! I'm sold. I've seen Ristaino's art on his other work, The Babysitter, so I'm very interested to see this. I understand it's early material and will be rough but that's ok. To steal the phrase, This is Certified Cool!
Jim: Don't steal... call it Lee Approval of Greatness, the LAG award.

Serenity Rose Vol. 02: Goodbye Crestfallen SC by (W/A) Aaron Alexovich
Serenity Sera Rose, noted witch, artist and social-phobic recluse, is conjuring unspeakable monsters in her sleep. She's being hassled by government goons, ogled by a town full of freaked out tourists, and menaced by a sadistic blonde witch who just showed up to make things worse. The stress is killing her, and if she can't get her head in order, she might just take several thousand people with her! $19.95 Visit the official site here with lots of cool previews
Lee: Having just read Lenore and loved that, there wasn't a chance I was going to miss this! The art looks great and the humor suitably twisted. And, it appears it was a web comic for a couple of years before hitting the paper world so most of the kinks have probably been worked out. I'm sold.
Jim: I go through periods where I want different types of material and Lee is right, after Lenore this has that same type of vibe. This could be a winner.

Antarctic Press
Bad Kids Go to Hell SC by (W) Matt Spradlin, Bazz Wernick (A) Anthony Vargas, Chris Allen
The Breakfast Club meets The Grudge in this sexy, dark comedy-thriller mini-series! A construction crew discovers a primal supernatural force when they break ground for a new commemorative library for Crestview Academy, a prestigious Midwestern prep school and home to the spoiled offspring of the city's social elite. Three years later, six of Crestview's richest (and hottest) students are brought together early one Saturday for detention inside the newly completed library. Bored, the kids talk about their school's infamous dark presence, and the kids goad one another into a half-hearted seance. Then the joke turns deadly when they rouse an angry spirit...and start to die one by one in horrible accidents! However, as the kids drop like flies, are the murders really the work of an evil phantom, or has one of these six spoiled brats secretly conspired to bring them all together for detention in order to level the social playing field and do away with the competition? $14.99
Lee: This is one of those really tough books to decide upon. The problem is the concept sounds good but I can’t find any art previews. And I really tried to find some art samples! The one or two pages I could find seemed somewhat generic. The reviews that I found either totally loved the book or completely despised it. There wasn’t any middle ground. That wide range of opinion gives me pause.
Jim: This sounds almost too cliche. I have seen this horror movie before and it never works out or is a good one. I have read this type of story before and none have ever stuck with me. Pass. 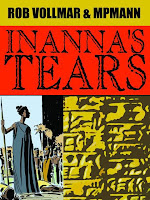 Archaia Entertainment LLC
Inanna's Tears w/Dust Jacket HC by (W) Rob Vollmar (A) mpMann
In Sumer, the prosperous city of Birith is known its devotion to the goddess Inanna. But after a millennium, the city is in danger of being overrun by nomadic refugees. Powerful interests outside of the city begin to question the wisdom of continuing to submit to Inanna's temple's authority. When the role of consort is passed unexpectedly to a woman named Entika, she must overcome not only the prejudices of her own people but a cunning enemy backed by the rising tide of history. $19.95 Visit mpMann here with some preview pages.
Lee: This is one of those books that I will order but never, ever really expect to see. Archaia has an incredibly spotty history with publishing. But, the majority of their material has great. In this case, the art looks strong and Vollmar is a proven writer with the book “Bluesman.” You can read a review of that book here. So, I will be ordering even if I don’t expect to see it soon.
Jim: I read the first two issue of the comic and while it was okay, it was not a series I continued with. Of course an actual publishing schedule would have helped. I expect it will read well as a complete story.

Secret History Omnibus w/Dust Jacket HC by (W) Jean-Pierre Pécau (A) Various
Four immortal brothers and sisters, consumed in an epic struggle to influence and shape the history of Western civilization. From Moses' challenge to the Pharaoh to the origin of the Grail myth; from the extermination of the Cathars to Nostradamus' travels in Italy; from the Spanish Armada to Napoleon's conquest of Egypt; and finally to the trenches of World War I: a secret occult history of the world told in seven chapters. $34.95
Lee: The Secret History is actually a French comic that’s been around for awhile. I’m not sure how Archaia ended up with the reprint rights but I’m glad someone did. I haven’t heard anything bad about it yet so I’m sold. In fact, one of the goons (dat’be you Shawn) from the store I go to raved about it for a long time so I’m jumping on the band wagon.
Jim: This was way too dense for me and made me feel like I needed to learn more history to appreciated the actual story. Well done, just a book that lost me.

Bluewater Productions
Distortions Unlimited #1 by (W/A) Daniel Crosier
Miners are found dead in a mine shaft, prompting an investigation into the unknown. Lead investigator Alyssa Montoya is haunted by visions of the ominous mine and what secrets it might hold, while set against the backdrop of a corrupt mining operation and the rising tension from protestors. $3.99 Visit Crosier here
Lee: I really like the cover to this book. It jumps off the page and really grabbed. The hype was good but not great. Finally, Crosier art is very distinctive. We’ve talked about it before and you can follow the link to see samples. I’m on the fence but I might check this out.
Jim: My problem is more with the publisher in that I'm not familar with them and don't know if they actually meet planned production schedules. It sounds petty, but I don't want to invest in something they may not continue or ever come out.

Roger Corman Presents Black Scorpion #2 by (W) Paul Salamoff (A) Daniel Cuchacovich
Detective Darcy Walker dons a makeshift costume and hits the seediest parts of Angel City to investigate the death of her father. Unfortunately at work, she is saddled with a new partner, Det. Steve Rafferty, who is tasked to track down and bring in this masked vigilante. As Darcy's job collides with her nighttime activities, her own investigation leads her to an unlikely suspect: Dr. Noah Goddard. But how could a man who's been in a coma for over a year be the criminal mastermind behind her father's death? $3.99
Lee: Got no clue if this is any good, but the cover is great. It’s as close to an Image cover as you can get without being published by Image.
Jim: Great cover, no desire to buy the book though.
Lee: Buy the book? Who said anything about buy the book? Hope the local store gets a copy that I can finger, sure? Buy, no.
Jim: Finger??? Won't your wife object?