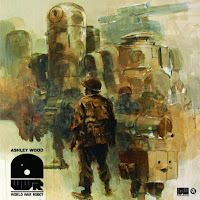 IDW Publishing
Complete World War Robot HC by (W/A/C) Ashley Wood
It's total robot war! In development to be a major motion picture, Ashley Wood's World War Robot tells the tale of a dwindling band of humans and robots who face off in a battle that will likely end humanity as we know it - on Earth, on the Moon, and on Mars, too! Badass battles, really intense human/robot drama, and even a little black humor and political intrigue are the order of the day in this oversize epic that collects both previous books in one deluxe hardcover volume. Hardcover. Full Color. 96 pages 12 x 12 $29.99
Lee: These oversized collections of Ashley Woods are expensive but well worth it. I have the Zombies Vs. Robots pair and I love them. Woods stories are quick and breezy but the art really carries it. A must for art fans.
Jim: The art does look good, but again as more of the story guy, I need to have more story then what I found these gave me.

Original Johnson Vol. 01 GN by (W/A/C) Trevor Von Eeden
At last-The Original Johnson, Trevor Von Eeden's personal and heartfelt graphic novel biography of Jack Johnson, the first African-American heavyweight champion of the world, international celebrity, and the most controversial American of his time. This is the artistic achievement of Trevor's career (Batman, Green Arrow), more than four years in the making and worth every moment. TPB Full Color. 128 pages. $19.99
Lee: Between Fantagraphics King collection and this, it’s a great month to be a history buff. I love sports and I love reading about the characters that lived in the various eras, so this is a must for me. It doesn’t hurt that Von Eeden is a master of the comics medium either.
Jim: Now this book is one I really want to read. Not only does it sound like a great history book, Trevor Von Eeden's work is usually great stuff.

Winterworld HC by (W) Chuck Dixon (A/C) Jorge Zaffino
Dixon & Zaffino's long out-of-print classic is finally collected! In a bleak and desolate future, when our world has been encased in ice from pole to pole, an amoral adventurer and an orphaned girl form an unlikely alliance-and together fight tooth and nail to stay alive. This features the stunning, groundbreaking artwork of Jorge Zaffino. As a special bonus, this hardcover also collects the never-before-published sequel, Wintersea! Hardcover. B&W 150 pages. $19.99 Here’s a writeup about the book at Dixon’s site.
Lee: GOTTA GOTTA GOTTA HAVE! Winterworld is a complete classic. Dixon turns in a great story but Zaffino does some amazing art. This was published by Eclipse in the 80’s and is just about impossible to find. Great story, great art, what’s not to like.
Jim: Nothing which is why I'm on this book also. Chuck Dixon always tells a great story.

Oni Press Inc.
Crogan's March HC by (W/A) Chris Schweizer
Legionnaire Peter Crogan has some hard questions to answer. Should he finish out his 5-year term of service with the French Foreign Legion, or become an officer for life? There's not much time to consider his options as the armies of the Tuaregs arrive. And just when Crogan thinks there's only the relentless heat still to overcome, the rag-tag group of hardened fighters are trapped in a cave by a terrible creature with a taste for human flesh! $14.95 Visit Chris here with a 26 page preview!
Lee: I was on the fence because of the semi-cartoony art but after reading the preview I’m sold. The art works well. The story appears to be both entertaining and historical. What’s not to like?
Jim: Oni Press does print some good material and I will probably cave in and buy this book also, but the art is different for this type of story.

Papercutz
Classics Illustrated Vol. 07: Dr Jekyll & Mr Hyde HC by (W) Robert Louis Stevenson (A) John K. Snyder III
Not only was Stevenson's novel the inspiration for The Incredible Hulk, but Alan Moore enlisted Dr. Jekyll and Mr. Hyde in his original graphic novel series, The League of Extraordinary Gentlemen. This adaptation by Grendel artist John K. Snyder III is true to the spirit of the original Robert Louis Stevenson novel of a man's experiments to plumb the depths of a fractured psyche, and stands by itself as a fantastic thrilling adventure. $9.95
Lee: I’ve been getting these reprints and they are very, very good. This is one of the better ones with outstanding artwork from Snyder. These are highly recommended.
Jim: I'm done with the Classic Illustrated type of material. At this point I'd rather read the book.

Radical Publishing
Last Days of American Crime #1 by (W) Rick Remender (A) Greg Tocchini
In the not-too-distant future, as a final response to terrorism and crime, the U.S. government plans in secret to broadcast a signal making it impossible for anyone to knowingly commit unlawful acts. To keep this from the public, the government creates a distraction, installing a new currency system using digital charge cards. Enter Graham Brick, a career criminal never quite able to hit the big score. In a grand scheme, Graham intends to steal one of the charging stations, skip the country and live off unlimited funds for the rest of his life. But the media has leaked news of the anti-crime signal one week before it was to go live... and now Graham and his team have just a few days to turn the crime of the century into the last crime in American history. $4.99 #1 of 3
Lee: Remender has always been hit or miss as a writer but he’s got great ideas. The same goes for Tocchini’s art, very hit or miss. But, it’s two big name creators with a great idea so I’m in for the ride.
Jim: I think Remender is hit and a rare miss, so I'm all over this book. Plus Radical Publishing is one of the better publishers out there, so even if I was on the fence I would try it out.

Rebellion
Judge Anderson Psi Files SC by (W) John Wagner, Alan Grant (A) Brett Ewins, Ian Gibson Cassandra Anderson is a member of Psi-Division, the psychic section of the Justice Department. A precognitive telepath and empath, she can detect crimes before they are even committed! In this bumper volume, containing over 300 pages of thrills and bonus material, Anderson faces some of her toughest cases - and finds out that it really isn't all in the mind! $24.99
Lee: I’m a huge Judge Anderson fan so I’m getting this. Wagner and Grant typically tried themes and storylines with Anderson that wouldn’t fit the Judge Dredd mold. They tended to be great explorations of the Dredd-verse.
Jim: I'm with Lee on this one. Judge Anderson was always a favorite of mine also. 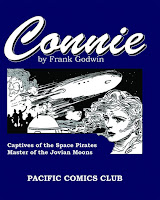 Tony Raiola
Connie Vol. 01: Captives of Space Pirates SC by (W) Harold Godwin (A) Frank Godwin
Connie Kurridge, newspaper Comics' greatest female adventurer, explores outer space in these two complete stories from 1939. Frank Godwin's brilliant artwork brings classic technique and wild imagination to his brother Harold's inventive scripts. Very hard to find because it appeared mostly in minor newspapers, Connie has previously been known only to die-hard collectors and illustration fans. Contains Captives of the Space Pirates and Master of the Jovian Moons. $11.95 I hate using the reference but there’s not a lot out there on Connie, so the wiki is here. A history of Godwin is here
Lee: Seeing this selection should come as no surprise because everyone knows I love classic strips. Whether this is a classic or not can be debated but the stellar art can’t be. Frank Godwin was a master artist. Add hokey 1930’s science fiction and I’m sure this is a winner. I’m getting it but I’m not familiar with the publisher so I hope it’s high quality.
Jim: I'm passing on this, but I can understand Lee's desire to get it.

Transfuzion Publishing
Apocalypse Plan GN by (W) Rafael Nieves (A) Dan Dougherty
What if Heaven and Hell were corporations, and instead of sales, their charts tracked souls? And what if one company decided to initiate a hostile takeover of the other? It is the story of Revelations as each company is vying for control of the market - in other words, mankind. And while there are battles, to be sure, the feel of them, for the most part, are more akin to an action/adventure or espionage thriller than to any Judeo-Christian/Greco-Roman, Biblical visualization! $12.99 Visit the website here
Lee: Boy oh boy is this a pick gone wrong. I picked it because I liked it. It sounded interesting and right up my alley. Then I tried to find previews or art samples and found the main web page. The very first entry is a plea to order the book so it can be printed. What? Is this what indie books have devolved too? Make a solicitation then hope enough people order to justify printing? I understand why you do it that way, but it makes it really hard to get excited if I don’t even know if I’ll get the book. This is a vicious catch-22 because I want to support it but if I’m never going to get it then I don’t want to commit my money to it.
Jim: This is an interesting dilemma. We have print on order comics and now we have "if you demand it we will print it". I can't order a book on spec. I like the premise, but I do not want to invest my time and energy into a book that the creators do not have enough faith in to publish themselves. I know it is a hard road, but self publishers have to pay to get there stuff published and then go out and sell it themselves. Begging for orders is not working for me.

Lee: Overall, this a fine return to form with lots and lots of cool offerings. I can't wait to get it all.
Jim: This is a good month and more back to what we normally see, a lot of good books across the spectrum and plenty to choose from.
Posted by Lee at Friday, October 23, 2009