The Bloom is Off the Rosa

If all goes according to plan, by the time you're reading this I should be well on the way to recovery from a partial diskectomy surgery I'm having on October 20. Because I doubt I'll feel up to posting anytime soon after that, I'm working ahead a bit.
I'm also cheating a little. My somewhat alphabetical cruise through the Comic Cabinet should have me reviewing Miracleman at this point, but I'm skipping slightly ahead and will come back to Miracleman. Even though it's only about 20 issues, it's some heavy work that needs a bit of thought.
Instead of Miracleman, I'm going with another Eclipse book, 1987's New America. This was a 4 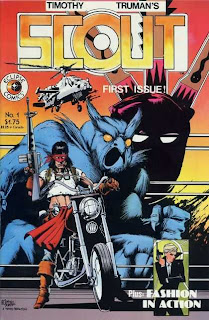 issue miniseries that spun off of Timothy Truman's Scout, which I'll also be looking at in the not too distant future. New America features the story of Rosa Winters, one of the main supporting characters in Scout. New America was written by John Ostrander and Kim Yale, the former of whom has been a frequent collaborator with Tim Truman on various projects. The art was by Gary Kwapisz, who I can honestly say I know absolutely nothing about. He may have been picked for this project because his art so closely resembles Truman's work. In fact, without looking at the credits, I would have thought Truman did the art, but a quick Google glance tells me Kwapisz did a lot of work on The Savage Sword of Conan, which seems a good parallel to the style Truman employs.
But enough about the art. New America is not a stand alone series. There's no way you could understand what's going on in it without having first read Scout. Having not read Scout in many years before re-reading New America, I had some trouble recalling some of the characters and the geopolitical status quo at the start of the story. As I recall, Scout started out set in the late '90s in a world in which the US has fallen on very hard times. The USSR remains a superpower, but the US is not. Canada is now a power and Israel has consolidated the entire Middle East under its leadership. Considering what has actually happened, fantastical would be a pretty good description of this future. In Scout, at the beginning, the US was ruled by a Reagan stand-in who had been in office for much longer than his 2 terms. By the end of the series run he had been dead for some time and the US was in a civil war of various small state and city interests. If the country was being held together at all, it was under President Laua Carver, who had been Vice President. Carver was a recovering heroin addict who had also fallen in love with Rosa Winters, her personal guard, but Carver was killed by her Vice President, Bill Loper, who became President himself. Loper, by the way, was originally a spiritual adviser to the Reaganesque president. No denomination is specified, but he appears to be a Protestant of some stripe.
Winters was a special forces soldier who had trained with Scout, Emanuel Santana, from the time they were teens. The two had also been lovers, on and off, with each still retaining strong feelings for the other. Santana, though, had gone on a vision quest and then a prolonged insurrection of his own making, which had made him a priority target of the US government, such as it was. Winters had remained with the US government risen to the highest circles of power, though behind the scenes. Although she and Santana had gotten back together during the run of Scout, they were apart for good by the end of the series. 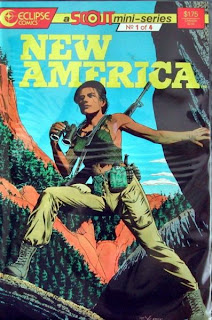 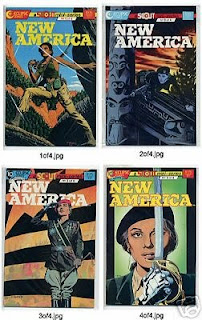 involved killing people she wouldn't have had ties to. The love of the priest seemed forced to create a tie there, so I couldn't get into her loss. The deaths in Alaska don't seem like they would have meant much. The relationship with the adopted daughter was never explored, just stated. Only the killing of her Israeli friends seemed like it would be deeply affecting to her, but I had a hard time buying into the rationale for killing them. The trade off of having the Pope under her control versus alientating her Israeli allies didn't add up.
New America just doesn't hold up to Scout's standard. As I said, I'll look at Scout soon, but my memory of Scout was a much deeper development of the characters. I've held onto these books because 1) Winters was one of my favorite characters in Scout, 2) 4 issues doesn't take up much room, and 3) the covers by Tom Yeats are just beautiful. Those made me think of Winters more as a real person than the story between the covers. Even the homage to the movie Patton is more evocative than much of the story within.
Posted by Thomm at Sunday, October 25, 2009