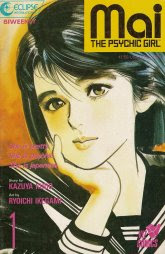 In 1987 I'm 20 years old. I've heard about manga for awhile and gathered the art is rather like the old Speed Racer cartoon. Eclipse, along with Viz Comics, is publishing some English translations of some better known manga titles. I've heard good things about Mai The Psychic Girl, so I give it a shot. Going in I knew manga generally were not ongoing series but defined end stories, so that was a plus, too.

This was the end of my manga reading, though. At 28 issues, published bi-weekly, at least it was through in about 14 months. It's just not my thing. Cultural differences probably have a lot to do with it, but I usually like other cultures.

One of the things that sets me back is the dual superiority and inferiority that's expressed. It may not be wise to attribute the writings of one man to an entire country, but I've studied Japan beyond these comics and know that what writer Kazuya Kudo and artist Ryoichi Ikegami present a fairly representative picture of Japanes culture, at least in 1987.

Like all manga, Japanese characters are drawn looking like Europeans rather than Japanese. I'm certainly not the first to comment on this particular characteristic of manga, nor am I the first to consider it something of an inferiority complex within the Japanese culture. But the other side of the coin, namely the depiction of a Mongolian kid as something of an obese social retrograde who licks his own snot as it runs out of his nose, and a Vietnamese kid as a dwarfish clown, shows both a superior view toward other Asian cultures and reinforces the inferiority complex in the face of Europeans. Why an American boy is drawn rather effiminately is beyond my pop social psychology efforts.

Then there's the nudity. As ongoing readers will know, I'm all for adult nudity in comics, including graphic depictions of sexual relations. Our star here, though, is 14. Not like a Supergirl, full on woman's body teen, either. She looks like a teen. For most of the last two issues she's topless. The plot device is that the American boy, also a psychic who's trying to kill her, has blown up a refinery as Mai flew near it, tearing up her clothes. I appreciate that the artist doesn't try to dart around that by using forced poses or unrealistic fabric positions to cover up the "naughty bits". That makes perfect sense during the fight, and is often shown at a distance to get the full scope of the fight. It's when there's lingering shots of her petite, perky breasts that I'm thinking this is a little toward the child porn world. One shot makes sense because a 16 year old boy is getting a full glimpse of her breasts, evidently his first view of a woman/girl's breasts, so that fits in showing his reaction. Other times it's just a little creepy.

Those are my two biggest problems with Mai The Psychic Girl. Other problems are more pedestrian and have to do with plotting. The plot centers around a group called the Wisdom Alliance, which allegedly runs the world from its secret lair in Switzerland. Problem one? This secret group has a large, modern architecture, imposing edifice of a building that would call attention far and wide, sitting on top of a mountain as it does. This seems counterproductive for a secret organization.

The Wisdom Alliance is trying to get Mai to come to Switzerland where she and other youth from around the world who have psychic powers will be sheltered from a coming nuclear conflict between the US and USSR that will wipe out all the rest of humanity. The Wisdom Alliance has planned for this confrontation to occur on September 9, 1999. Doin' in it to the nines, I guess. After 10 years, the super human psychic race that survives will emerge and take over the planet. Mai is sought as the future queen of this group, being the most powerful of the psychics they've clandestinely tested. To further the goal of convincing Mai to join them, because they realize she's more powerful than any of the psychics they already have, the Wisdom Alliance sends a Japanese security firm that secretly runs Japan, or at least all of its police, to kidnap Mai and kill her father.

It's hard to count the problems with this plot device, but I'll give it a go. Why kill everyone 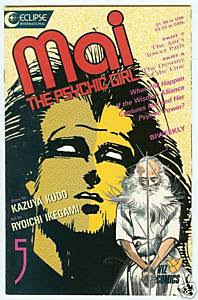 except your chosen few with a nuclear war? Who are they going to rule? There aren't that many psychics that have been found in the story. In fact, including Mai, we only ever see 5 in the entire story. That's not really enough to form the basis of an population, Adam and Eve mythology notwithstanding. After a short while the genetic flaws this would cause would soon be evident.

Another point - a nuclear war between the US and USSR would not kill everyone in the world outside the Wisdom Alliance bunker. Hell, it wouldn't even kill everyone in the US and Europe. Oh, there were always lots of quotes in those days about the nuclear arsenals being sufficient to blow up the world x number of times over, but they weren't targeted all over the world. They were targeted at specific sites, often redundantly, should one fail. Nukes falling on Africa or South America in those days, not too likely. There would be a lot of survivors.

On the other hand, if there were a nuclear war, Switzerland would surely be in the midst of it. Ten years isn't going to be nearly enough for it to be safe to come out into the nuclear wasteland that would be Western Europe.

But, that's just premise stuff that can be laid at the feet of comic book junk science. Dumber is the idea that sending a security firm, with no psychics, to kidnap Mai and kill her father is going to do anything but peeve the really powerful psychic you want to have join your way of thinking. Dumb as that is, though, it gets dumber. After a guy who's been altered by some sort of Pentagon experiments with nuclear energy, and who has the intelligence level of Mongo in Blazing Saddles, causes Mai's father to fall from a cliff, she ends up staying with a bunch of college students, all male and all stereotypical. That's not the really dumb part, though. The guy who sent the hulking giant after her and appears to have killed her father, now wants to prevent the Wisdom Alliance from getting her. Equally bizarre, she is happy to go stay with the guy.

There's no character explanation here as to why this guy would do this. He's a WW II vet who had a reputation for heartlessness in the conquered parts of Asia, even amongst the Japanese. What could possibly cause this guy to suddenly want to protect Mai? More so, what would lead Mai to think he's her protector when she just saw him cause the death of her father? Beats the hell out of me. Having been betrayed by its agent, the Wisom Alliance decides to send in an East German (remember that country?) girl to first capture Mai, but when that doesn't work, to kill Mai. They do this knowing that Mai is more powerful than the German girl, but count on the German girl's ruthlessness, while at the same time somehow thinking that if Mai kills the German, she'll suddenly convert to the Wisdom Alliance. Mai does end up killing the German, though she first tries to befriend the girl. That then leads to the American, Vietnamese and Mongolian boys being sent in, along with the leader of the Wisdom Alliance. Considering how little difficulty Mai had in killing the German, other than her own moral qualms, I would think the leader of a world controlling secret society would do the smart thing and stay as far away from Mai as possible, but what can you expect from a guy who looks like Ming the Merciless with an eye patch?

The Vietnamese kid is sent in as a mole to be a student in Mai's class. He's two years older but drawn about a foot and a half shorter. Of course, sizes of characters are an ongoing quandry for this series. The nuclear giant is sometimes shown acting as a driver and bodyguard for the security firm guy, but at other times he's dwarfing the same vehicle when he's standing outside of it. In fact, he's big enough to carry a grown man while it appears that the man is the size of a child in his arms. He can't both be that big and fitting into a car as a driver. And why does he go from the beginning of the story where he's kept in a bank vault so he doesn't attack people to Driving Miss Daisy?

Where was I? Oh, yeah. The Vietnamese kid is treated nicely by Mai, so when he's ordered to

kill her, he doesn't. The American kid is sent to assassinate the security guy. He eventually does, but is deeply upset when he also kills the nuclear giant, proclaiming that he felt a kinship as a fellow outsider. He'd just met the nuclear giant in the incident in which he kills the giant, so how could he have a deep feeling of regret when he's had no regret about killing anyone else?

After all is said and done, the Wisdom Alliance loses, Mai's father is recovered, after a brief bout with what's called amnesia but appears more like a waking catatonia, Mai has a puppy, and is back in her classes, like nothiing ever happened. Well, except for the dozens of people killed in the psychic battles. No consequences for that, though.

I've kept these books all these years because the art is impressive. Like all manga it can shift to charicature in an instant, and has its stock characters who are diminutive comedy pieces, but the detail work on buildings and scenery in general, as well as the lovely posed shots of characters, all in black and white, is really impressive. As some of the commentary in the letters area of the books notes, although one artist is credited, the work is studio work, so that that different artists are handling different parts of the work. The line work and the inks are worth the keeping. Besides, it's the only manga I have.
Posted by Thomm at Sunday, October 18, 2009