Jim: Wow, the pickings are slim as is what Dark Horse is producing right now. The license side of the business and Mike Mignola are the big things keeping Dark Horse alive right now.
Lee: I think the license side of the business has always kept DH afloat. And, more than a few of our friends are huge Buffy/Star Wars geeks so they’re always excited to see these releases. 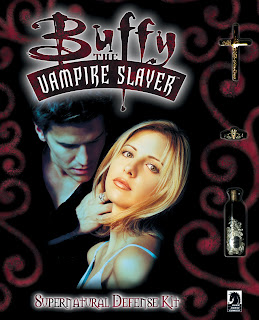 BUFFY THE VAMPIRE SLAYER SUPERNATURAL DEFENSE KIT
On sale Feb 179.72" x 8.2" x 1.25"$24.95
Back by popular demand! Die-hard Buffy fans just kept asking for this long-out-of-print book and keepsake package. Well, it is returning from the grave.
This slipcased package combines a great Buffy adventure with a dazzling trio of specially crafted items that are featured in the story. The book is a deluxe hardcover, about 80 percent of comic-book size, thread sewn, utilizing a fine matte art paper stock. The story is an expansion of "The Final Cut," part of which originally appeared in Buffy #8. New pages have been added by the creative team.
Actual elements from the story have been created, and are visible through die-cut windows in the slipcase: Buffy's trademark gold-colored cross, the traditional "Claddagh" ring, and a glass vial of holy water with silver flakes suspended in the fluid.
Defend yourself in style or provide the special someone in your life with a unique gift.
Jim: I’m not a big Buffy fan, but for a fan of the show this sounds like a lot of fun and only $25.
Lee: I’m not a Buffy fan either but this does sound like an excellent package. 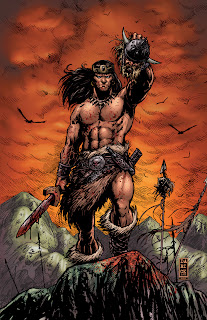 CONAN THE CIMMERIAN: THE WEIGHT OF THE CROWN
Darick Robertson (W/A) and Tony Avina (C)On sale Dec 16FC, 40 pages$3.50 One-Shot
Living legend Darick Robertson (The Boys, Transmetropolitan, Wolverine) focuses his powerful storytelling talents on Conan--his favorite barbarian hero! In this "adult fable" that Robertson writes AND draws, Conan travels away from Cimmeria to search for a mercenary job that will bring him the fierce joy of battle and the spoils of war. Intrigued by a leader known as the "Mad King of Gaul," Conan joins a band of brutes who are defending the Aquilonian border from incursions and who enjoy living in a lush valley that the Mad King claims for his own. These warriors soon believe that Conan may be a more fitting successor to their leader than the supposed king's own son--setting Conan on a potentially disastrous course!
Taking place between the Cimmeria and Black Colossus story arcs in the Conan the Cimmerian monthly series, this issue is perfect for both longtime readers and for intrigued fans looking for a dynamic one-shot punch from the visceral and cerebral Darick Robertson.
Lee: Darick Robertson WRITES???? That’s really cool but really scary at the same time. Considering the writers he’s worked with, Ellis & Ennis, I’m betting this is good.
Jim: This does have potential, but not every artist can write so I would go in with some trepidation, but I’m sure some writer friends helped him out. 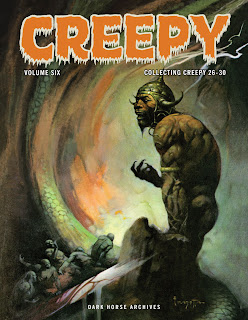 CREEPY ARCHIVES VOLUME 6
Various (W/A) On sale Feb 24 b&w, 240 pages $49.99 HC, 8 3/8" x 10 7/8"
Dark Horse Comics continues to showcase its dedication to publishing the greatest comics of all time with the release of the sixth spooky volume of our Creepy magazine archives. This collection of legendary yell yarns includes selections from revered writers Archie Goodwin and Harlan Ellison, among others, and groundbreaking artistic contributions from Frank Frazetta, Neal Adams, Angelo Torres, Jack Davis, underground comics great Vaughn Bode, and more.
Treat yourself to this fright-filled tomb, and you'll see why these gore-geous collections have become freaky fixtures on the New York Times bestseller list!
* Creepy Archives won the 2009 Eisner Award for Best Archival Collection!
* Creepy Archives includes bonus color pages.
Jim: Using this book as an example that I believe Dark Horse has taken over as the premier publisher of archival material. DC used to be the best and are still good, but Dark Horse presents each type of material in the best format possible for that material 99% of the time.
Lee: As usual I’m going to have to disagree. You’re basing your argument primarily on the Creepy/Eerie archives. And, I would agree those are probably the best archives produced you forgetting the others. I have Boris Karloff Tales of Mystery archive, and while I enjoy it, it’s not the best reproduction. The pages are shot directly from comics so it has that grainy old comic look on high quality paper. I think the reproduction is what’s keeping DH from eclipsing DC.
Jim: I’m thinking of Creepy and Erie Archives and the Hellboy Library Editions, so your point is valid as the Doctor Solar Archive was not up to DC standards for archives. 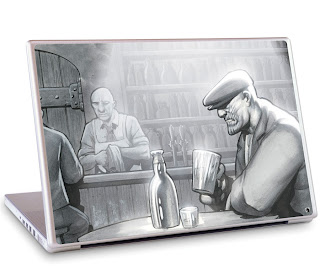 GELASKINS
On sale Dec 16
13" Laptop$29.95
15" Laptop$29.95
iPhone$14.95
Over the years, Dark Horse has been committed to incorporating art into our everyday lives through prints, T-shirts, mugs, and a variety of other items that help make this world more colorful. Now Dark Horse is proud to collaborate with GelaSkins to bring over twenty new designs to their line of protective skins for laptops and phones.
Jim: Normally I’d be ‘who cares’, but since I’m switching to an iPhone soon that Goon phone cover may have to be mine.
Lee: You are kidding me right??? Oooohhh, there is nothing more appealing that a 60 yr old man looking hip with his iPhone and Goon Gelaskin. Ugh!
Jim: I have years before I’m 60 dude!
Lee: Ooops. My bad on that. But with all the white hair you can see how I made the mistake. 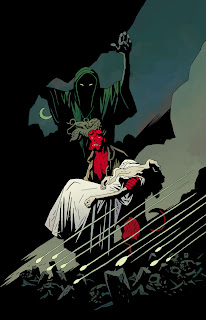 HELLBOY: THE BRIDE OF HELL
Mike Mignola (W/Cover), Richard Corben (A), and Dave Stewart (C)On sale Dec 23FC, 32 pages $3.50 One-Shot
A year after their Eisner-nominated collaboration Hellboy: The Crooked Man, horror comics legends Corben and Mignola reunite! A nineteen-year-old girl is kidnapped and Hellboy tracks her down to a remote clearing in France where she's about to be given to Asmodeus, in a strange tale of ghosts, demonic revenge, lost love, and King Solomon.
Jim: Okay Richard Corben disappeared from comics for a long time and now he has been knocking out more material then almost any other artist around. I really would like to see him do a high profile character for a one shot like Superman or Thor, could be a lot of fun.
Lee: EW! AUGH! ERRR! You want to see Corben on Superman??? I cannot think of a worse artists-character mismatch if I tried. Corben doing barbarian or horror material is still some of the best. Let’s leave it at that.
Jim: The juxtaposition would be great, like on an eight page story or something. You liked Strange Tales from Marvel for the reasons you say you would hate Corben on Superman, very odd.
Lee: I liked Strange Tales worked because all the stories were short. I don't think the same book would work in a longer format. So, I would probably give an 8 page Corben story a try. I still don't think it would look good. 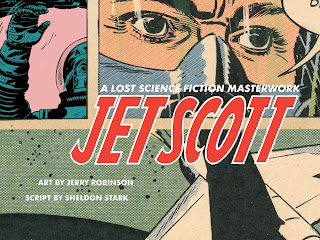 JET SCOTT VOLUME 1
Sheldon Stark (W) and Jerry Robinson (A) On sale Feb 10 FC, 216 pages$34.99HC, 12" x 9"
In the 1950s, when the world was faced with strange or anomalous threats, there was one man who was called on to set the situation right--Jet Scott of the Office of Scientifact! Whether it was tracking down deadly Banthrax germs, uncovering the source of strange ocean creatures, or discovering the cause of spontaneously combusting pipelines in Saudi Arabia, Jet Scott was the adventurer who could get to the truth!
* Jerry Robinson is one of the best known of all the artists who have drawn Batman over the years and is often credited with creating the Joker, one of comics' greatest villains!
* Dark Horse Comics is proud to collect the Jet Scott comic strips, for the first time ever, which were originally published from 1953 to 1955 by the New York Herald Tribune!
Jim: Sadly I really want to get this, but will have to pass right now as I have too many wants and have to sometime restrain myself. It just sounds very cool.
Lee: A true sign of ‘we’ve been doing the blog to long’ is this book. I had the exact same thought. I really want it. But, I already ordered too much so I can get it. 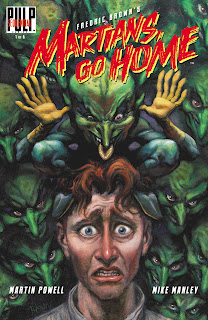 MARTIANS GO HOME #1 (of 6)
Martin Powell (W), Mike Manley (A), and Bret Blevins (Cover)On sale Dec 2 FC, 32 pages$3.99 Miniseries
Martians have invaded Earth!
That's right, real Martians. Seriously. Suddenly, without warning, one billion Little Green Men are everywhere. The Martians are on your street and in your house, all of them knowing your deepest and darkest secrets. Untouchable as ghosts and obnoxious as hell, their sinister agenda remains a mystery. Perhaps their plan is simply to drive the entire human race insane, for that is exactly what they're doing.
From flop house to the White House, no one is above, or below, the torment of the alien invaders. All is lost. Or is it? Only our unlikely hero, Luke Devereaux, a burnt-out science-fiction writer with nothing left to lose, knows how to defeat the Martians . . . but he has already lost his mind!
Sequential Pulp Comics presents writer Martin Powell, with artists Mike Manley and Bret Blevins, joining forces to adapt Fredric Brown's classic 1950s "paranoia" sci-fi novel into a spectacular six-issue limited series.
You won't think of alien contact in the same way ever again!
Jim: Not familiar with the book, but the premise sounds great, I will check out issue #1.
Lee: Another very amusing selection for completely different reasons. I saw this, noticed the artist was Mike Manley. Said “Cool”. Noticed Bret Blevins cover, “Said super-cool”. I was sold. Then I read the text and decided I was gonna get lucky with a good story. But, it’s worth it for the art alone.

Jim: I give Dark Horse credit that they are always searching for different things to do and are always pushing the envelope.
Lee: Actually, I think DH does a great job of keeping the non-Buffy/Star Wars people like us interested. We come back every month and always seem to find something fun and interesting so they must be doing something right.
Posted by Jim at Friday, October 09, 2009