Lee: Well, I guess it’s a good month for Marvel. I’ve taken the lack of Blood-n-Guts and Boob covers to be a sign that Marvel might actually be growing up. One can always hope at least. But I felt there was a lack of anything new and exciting so Jim picked most of the books this month. Don’t get worried, I’m still gonna vent!
Jim: I'm pretty tired of Marvel and all the moves they are making. I'm sick of all the events, I'm sick of the constant pushing the price point to $4 and sick of all the marketing ploys that seem to take advantage of their fans as opposed to rewarding them. 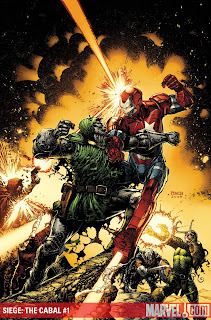 SIEGE: THE CABAL
Written by Brian Michael Bendis
Penciled by Michael Lark Cover by David Finch
The Siege Starts Here!! Remember when you were first introduced to the Cabal, the gathering of the most sinister members of the Marvel Universe, and you said to yourself: Well, that's going to blow up in everyone's face! Well, you were right and it happens right here!! Norman Osborn faces off with Doctor Doom and his mysterious threat to Doom is revealed. All of this is setting the stage for next month's explosive event: SIEGE!48 PGS./One-Shot…$3.99
Jim: So Dark Reign is coming to an end and we get the Siege. This just feels really wrong. At one time comics were series about the various heroes and told stories about those heroes. Marvel is losing that and replacing it with themes that the heroes just react to and live in. Characterization is what made Marvel great and it is being abandoned in favor of themes.
Lee: I agree and disagree. I think there is still plenty of characterization but the stories have become over the top complex. It’s almost like I’m not allowed to like just one character. I can’t just read Captain America. I need to read Avengers, and Captain America, and the Dark Reign titles. It’s just one big event after another. Actually, at what point does the “event every month” stop being an event and just status quo?
Jim: Excellent question Lee. At this point I no longer believe these really are events, it is just the next chapter in the saga of the never ending story. I guess that would be a good thing if the characters continued to progress but they don't. So you end up with a character whose history becomes too complex for the age you want the character to be. 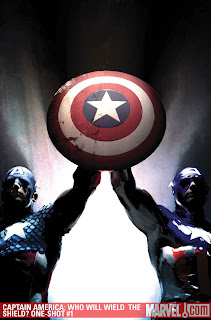 CAPTAIN AMERICA: WHO WILL WIELD THE SHIELD?
Written by Ed Brubaker
Pencils & Cover by Butch Guice
Steve Rogers has returned, but Bucky Barnes is the current Captain America, and has come into his own in the role. Will there be two Captain Americas? Will Bucky go back to being the Winter Soldier? What will happen? Decisions, decisions, decisions....32 PGS…$3.99
Jim: This marks Marvel moving into another idea of continuing the mini-series after it is over. By all rights Captain America Reborn should end with the answer to the above question.
Lee: But, if you end a story what keeps readers coming back? I think Marvel has forgotten that we, the readers, love the characters and want to read about them. We don't need one continuous story over the period of five years. We just need good stories.
Jim: And, before I forget, what a horrible title! I mean was the rhyme that damn important. Plus this seems to be another new idea from Marvel to tack on one more book after the mini-series is over as an epilogue to suck you in for another $4 as they did with War of Kings. Regardless of the actual quality it smacks of false advertising.
Lee: Sadly, I think it's the current state of comics. 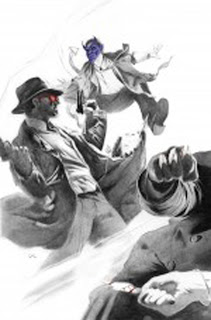 X-MEN NOIR: MARK OF CAIN #1 (of 4)
Written by Fred Van Lente
Pencils & Cover by Dennis Calero
"In the dark and steamy jungles of Madripoor, the flashing claws of Logan, the blazing bullets of Cyclops, and the dashing fists of the Angel met with wave after wave of beserk headhunters, all willing to protect the secrets of the Temple-Tomb of Cyttorak with their lives! The ancient treasure map of mercenary Cain Marko, with its siren-song of the priceless gigantic ruby of the fabled god-king, had lured them only into the icy claws of Death!"32 PGS…$3.99
Jim: Once was a good idea and something fun, but now it feels like they are milking this idea way too far as they are already doing sequels.
Lee: It sold well. Lots of people liked it. Why not make a sequel. It’s the Ultimate U- all over. Personally, I enjoy these more than the regular universe because I get good, contained stories that actually end instead of going to the next cross-over. 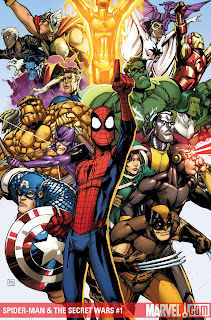 SPIDER-MAN & THE SECRET WARS #1 (of 4)
Written by Paul Tobin
Pencils & Cover by Patrick Scherberger
How do ten heroes end up buried alive beneath one hundred and fifty BILLION tons of rock? And is the Hulk mad enough to do anything about it? What were the events that led up to this catastrophe? What are the heroes thinking? And with the weight of an entire mountain range above them, how do they go about their desperate fight for survival? All the answers are in the first issue of the series that takes you deeper into the classic events of the Secret Wars, and pulls the lid off stories that were left untold! 32 PGS…$2.99
Jim: Remember when Marvel was called the House of Ideas? I think they need to rename the place to House of Retreads or something. I mean this is as lame as it gets. Of course it is getting “talent” that is probably being paid rock bottom rates.
Lee: I can’t really argue with Jim on this. It seems pointless and stupid. Maybe Bendis doesn’t allow anyone to have an idea but him. 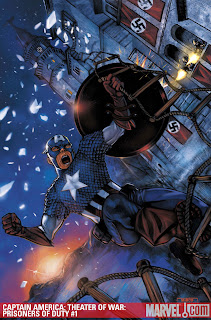 CAPTAIN AMERICA: THEATER OF WAR – PRISONERS OF DUTY
Written by Kyle Higgins & Alec Siegel
Penciled by Agustin Padilla Cover by Mirco Pierfederici
Wounded behind enemy lines, Captain America faces one of his greatest challenges yet—escaping a Nazi POW camp…as Steve Rogers! Brought to you by Kyle Higgins & Alec Siegel, co-creators of the fan-favorite film The League!40 PGS./One-Shot/ …$3.99 Jim: At this point, isn’t this an official series now? I mean I can think of about 5 to 6 “one-shots” so far that have been done with this title.
Lee: I wonder how it would have done as a regular title. I’m sure the “one shot” solicitation hurt it. With so many books on the stands already, one shots are the first ones to get dropped off the pull sheet. 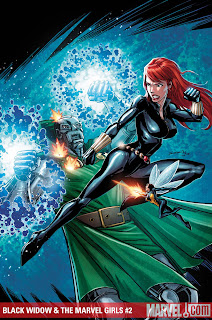 BLACK WIDOW & THE MARVEL GIRLS #1 & 2 (of 4)
Written by Paul Tobin
Pencils by Salva Espin (issue 1) Pencils by Jacopo Camagni (issue 2)
She's the most efficient spy in the world and one of the world's deadliest women, but before there was ever a Black Widow, there was the Red Room, a brutal KGB training ground for assassins, undercover agents, and the most ruthless of spies. Now, tasked with removing a rogue weapon's dealer from an impregnable safe house, the Black Widow remembers her escape from the Red Room training facility, an escape only made possible with the aid of the most unlikely of allies, the Asgardian sorceress known as Amora...the Enchantress. THEN IN ISSUE 2, fitting in with the Avengers is not an easy job, not for a woman with no true powers beyond years of training and a ruthless ambition to succeed at any given task, and after a midair battle separates the Black Widow from the rest of her team, the mission to protect an advanced robot just got harder. Luckily, the Black Widow has her skills on her side, and the Avenger known as the Wasp at her back. Unluckily, the robot's owner is Dr. Doom, and Latveria's despotic ruler will stop at nothing to reclaim his own. 32 PGS. (EACH)…$2.99 (EACH)
Jim: What the f**k is this? Marvel is going crazy with these heavy chick books like Marvel Divas, Models Inc. and this stuff. Plus Marvel has almost all male writers who I guess are in touch with their feminine side or maybe ex-project runway designers. I like the girl books from DC about the actual super heroes, but this sounds like a buddy book or something. Blech.
Lee: Female characters with their own titles always seemed to be DC's strong point. Marvel is just trying to squeeze additional market share wherever they can.
Jim: And, from the hype "She's the most efficient spy in the world" Really - she has been captured three different times in three different comics in the last two months.
Lee: Maybe she's in a slump! Even super spy's can have a bad day. 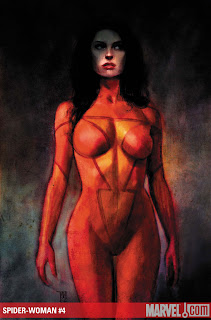 SPIDER-WOMAN #4
Written by Brian Michael Bendis
Pencils & Cover by Alex Maleev
It's Spider-Woman versus the Thunderbolts. That's right...all of them. A daring chase through the streets of Madripoor finds Jessica Drew pushing herself to the limit with nowhere to turn. Another dazzling chapter from the Eisner award-winning team of Bendis and Maleev featuring tons of material not seen in the accompanying motion comic.32 PGS…$2.99

Jim: Can any hetro male every make eye contact with Jessica when she is in her costume. I couldn’t.
Lee: I believe the spray paint costume (no actual material). It distracts the criminals from whatever evil deed they’re doing.
Jim: It would certainly distract me! The first issue of this book was well done and very enjoyable.
Lee: Was it enjoyable with or without the costume? Just curious. 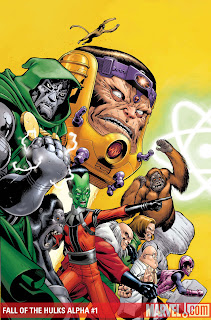 FALL OF THE HULKS ALPHA
FALL OF THE HULKS GAMMA
REALM OF KINGS: IMPERIAL GUARD #2 (of 5)
REALM OF KINGS: INHUMANS #2 (of 5)
X-NECROSHA: THE GATHERING
Lee: Honestly I don't care about any of these events. But I want to point out that you can no longer read a single book and get a single story. EVERYTHING is an event these days. Dark Reign covers all of the Avengers and general hero titles. Hulk now has 3-4 titles and a big event coming. The Space Heroes (Guardians of the Galaxy etc) now have regular events. And, of course, X-men is leading up to X-Necrosha. These are like mini-events. I'm hoping this mini-event trend will fade like de-compressed story telling eventually did. But, I'm afraid of what will replace it.
Jim: It is actually disappointing to me as I was trying to get back into reading Incredible Hulk and then I saw this coming down the pike and jumped off the book. Trying to recommit to one series was okay and I was suffering through what I thought was marginal work to see if I could get back into reading about Bruce Banner. Then I saw this crap coming up and jumped back off, I was not committing to a mini-event and did not want to read about Rulk.

Lee: Turns out today was mostly Jim ranting about bad books instead of me ranting about bad covers. Hope you enjoyed the change! More tomorrow with books we actually liked.
Jim: There were book we liked? Can't wait.
Posted by Lee at Wednesday, October 14, 2009