I'm Thinking of a Number... 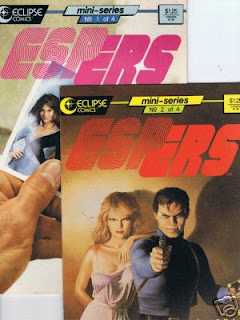 We bid a temporary farewell to the DC comics in the cabinet today. There's plenty to revisit, and in fact, I skipped Y the Last Man altogether, but it's back to smaller press for the nonce.
The late lamented Eclipse Comics, 4 years into its existence, started publishing Espers by James D Hudnall, with art by David Lloyd in 1986. Originally billed as a 4 issue mini-series, the fourth issue declared it was becoming an ongoing series. I have no idea what went wrong, but issue 5 was as far as it went. Most likely it was low sales, but I would have thought that would just have ended it as the mini-series it was originally intended to be. Hudnall did try to keep the concept alive by publishing another 8 issues under the title of Interface, via Marvel's Epic Comics, starting in 1989. I bought a couple of those issues, but it lost something by then. Image has since published some of the arcs in trade form.
Hudnall had a nice idea. Linda Williams is the American daughter of a kidnapping victim in Beirut, Lebanon. Beirut was the hotbed for that sort of thing back then, and clearly this story was to be set in the real world of the time. Linda's father, the kidnappee, has extra-sensory perception (ESP) in the form of being able to see the future. Linda's ability is to see information contained in computers. Using information from CIA computers that she has searched, Linda puts together an international team of similarly gifted people. Ian McVicar can see ahead 60 seconds in time and move either at Flash type speed or outside of time. He's been a bootlegger and smuggler. Simon Ashley is a Jamaican cook who can control fire. Maria Rivas is an Argentine journalist who can erect shields and teleport. William Silent Bear is a Native American mechanic possessed of telekenisis. Jiro Yabuki is a Japanese student who can control electricity.
To some extent this was riding the wave of the popularity of mutants, as surely all of these people are. Like the X-Men, it put together an international team, too. It's primary differences are that there are no costumes and no one's mutation makes them stand out, in appearance, from the rest of the population. Rather than the superhero mold, Hudnall took his mutants into the espionage and covert operations realms.
While the team thinks that the kidnappers are the run of the mill extremist sects in Beirut, in reality the kidnappers are led by an albino named Sergei Koznishev, with his second in command being a guy named Chin. Koznishev is a telekinetic like Silent Bear and Chin can move outside of time like McVicar. They're part of a wider conspiracy that's seeking to further destabilize the Middle East, to unknown ends.
The writing takes a well reasoned course in gathering the team. Only McVicar has any experience in the world their mission will take them, so after putting the team together in the first issue and adding some background for each character, the second issue goes into their training in Monaco, where Linda Williams lives. The team ends up making another enemy after a minor traffic accident with a Mafioso, but more than that the characters are developed. Most of the attention is given to Linda Williams, Ian McVicar and Maria Rivas. There's something of an attraction triangle there, as McVicar is interested in Williams while Rivas is interetested in McVicar. There's also the hint that Williams's father didn't approve of her having used her abilities to enrich herself, something he had strained to avoid in his career as a businessman.
With McVicar's criminal background and Linda Williams's implied shady activities, this is no team of saints. Silent Bear has a temper he struggles to control. Jiro is immature and also struggles to control his ability. Rivas is on the run from the Argentine government because of articles she has written about the disappearance of dissidents and their families. Only Simon Ashley seems to have a balanced life and is happy with it.
The international cast aspect can seem a little forced, but to some degree there's a logical consistency that these sorts of abilities wouldn't be easily located. On the other hand, in actual evolution, when a mutation occurs that favors a species, it tends to be first concentrated in a small group. Of course, scattered mutations like this can be argued to be examples of parallel development, which also occurs with evolution. Not that I think Hudnall thought quite that much about it. I'm sure it just made for more interesting writing to have a varied cast of characters. Conveniently, they all speak English.
I liked the way the first four issues developed. I liked the use of the real world setting. Khaddafi, Khomenei, the Argentine junta, and the Lebanese civil war were all current events in 1986. Hudnall even manages to throw in an aside on the Falklands War between Argentina and England. Hudnall manages a good twist when Linda's father is killed and his body dumped in Beirut, but Linda keeps her team going to rescue other hostages. As it turns out, the other hostages are all now sleeper agents for their kidnappers and are about to be released, but the rescuers come and get them first.
Koznishev escapes and sets a nuclear device to go off in his compound. He leaves Chin behind to guard the device, which leads to a nice fight between Chin and McVicar at high speeds. Simon Ashley kills a guy during the fighting, and Jiro is wounded, but somehow can heal himself with his electrical powers. The hostages are freed and the nuke is teleported by Maria to the Arctic. In escaping the bomb that she's left in the Arctic, Maria ends up in Hawaii, apparently amnesiac from the strain. Otherwise, the team is intact in Monaco when the opening arc ends.

The fifth issue brings in a new artist, John Burns, who's markedly better than David Lloyd. Lloyd wasn't bad, but rather stiff. Burns is a painted style and very fluid. I would have liked to have seen more of this title with Burns. The fifth issue introduces three assassins. One is an old Chinese man who sees himself as a god above all the rest of humanity. Another is of unknown nationality with a hate on for criminals. He only takes jobs to kill criminals at the behest of other criminals, usually killing both his client and the target. The last is a Texan who's also selective in who he kills, reading the life history of his targets to see if they're deserving of death before carrying out the job.
The issue also brings back the aggrieved Mafioso from the initial arc, who's looking to kill Linda and her team because they embarrassed him. More of the wider conspiracy that Koznishev works for is also revealed, with that group voting 18-2 to have Linda and her team eliminated. Clearly, there was a lot more story to be told here. 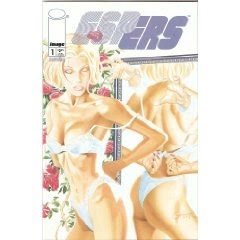 I'll have to check if I still have the Interface issues Epic put out, but I don't recall those issues continuing the story. I do recall quite a bit more cheesecake to the art, as at least one of the covers will attest. I'll check into that shortly to see if there's more to say about these characters and Hudnall's writing.
Posted by Thomm at Sunday, October 11, 2009