Trotsky A Graphic Biography – A Review 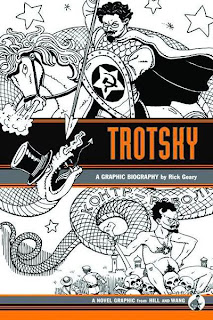 
Lee is the one who turned me onto Geary’s work and I have to say that he is now two for two with me. I read one of his books on a Victorian era murder and now this biography. I’m not a history buff, by any means, but I have a strong interest in history and know enough to understand the basic outlines of history. That’s why for someone like myself this book was both an enjoyable read and educational.

The Russian Revolution is something I’m aware of, but never studied in college or was interested enough to want to read up on it. The name Trotsky was familiar to me, but I would have lost on Jeopardy when I had to actual put him in a place or time. His story is fascinating, but not just for his story but for the history of the rise of socialism and communism in the world.

The timeframe of his life is from 1879 – 1940, which coincides with a great amount of technological change as well as a change from the bulk of the world moving from an agrarian society to an industrialized society. After reading this book I started to wonder if Trotsky was that unique or if he was a figure that would have been replaced by anyone of a hundred or so of the revolutionaries who were coming into prominence and power at the time. The world was a changing place and Russia was going from a feudal state to a more socialist type state. At the end Stalin usurped the rise of the socialist state and made it more of a dictatorship with a guise of communism.

The rest of the world was going through those some throes and the revolutions had varying degrees of success. It left Italy with a Fascist government and Germany with Nazism in charge of a very strong and iron fisted fascist state.

These were all the end games and part of what lead us into World War II, but Trotsky was there at the beginning. The amount of give and take and revolts and changes that Russia went through over the course of this time are enormous. The amount of information that is packed into this book is also enormous as the life story of Trotsky is also a history of the Russian revolution and a history of the rise of socialism and communism.

I’m not going to say that I took it all in, but I learned enough to have a greater appreciation for the seismic political shift that Western Civilization went though at that time and can see more clearly how Russia is neither a true part of the West or the East and is a thing unto itself. It is also an abject lesson in never giving your government too much power, but I’m reading into this what I will (as we all do).

Overall Grade A – Jam packed with information and for devote comic readers a great way to continue your education.
Posted by Jim at Thursday, October 08, 2009