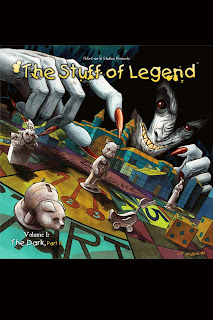 The Stuff of Legend #2

I was very effusive with my praise of the first issue of this book and you worry if something that knocks your socks off will hold up the second time around, this book did not disappoint. I want to find the right words that explain how I feel about this book but too many trite clichés that I personally don’t like come to mind like an instant classic or a seminal piece of work. This book is all that and more. It is like watching an old Disney Classic like Pinocchio again; it has both the fairy tale aspect, but the true sense of menace and danger that every great classic tale needs to have.

The one thing that you can’t help but notice is the art by Charles Paul Wilson. He is somewhere between Hal Foster and Neal Adams, but really he is his own man. He has a realistic illustrator’s style, but he is drawing toys that have come to life on the other side of the darkness of a closet. He has made each one of the toys come to life and be realistic extrapolations of what you would expect each toy to become, but he still keeps elements that remind us they were just toys in our world. Charles puts a ton of detail into each and every panel and knows how to rotate his camera angle and develop his shots for maximum dramatic effect. Without interviewing the creators I never know how much is the writer’s direction and how much is the artist, but Charles Paul Wilson is already one of the top illustrators in an industry rife with talented people. His work stands out as an example of the finest the industry has to offer. He has the artistic ability of a portrait artist, the detailed eye of a bird watcher artist, the story telling ability of a Jack Kirby and the stylistic flair that makes each page his own. The quality of his work can’t be overstated and what amazes me even more that I had never seen his work prior to the last issue. His first foray that I’m aware of into the comic book world is already one that has put his mark on the industry. I’m afraid I maybe over selling Mr. Wilson a tad, because as with any artist worth his salt I’m sure he sees room for improvement, but I know what I like and for this story I cannot imagine anyone else doing it justice.

The story matches the art page by page and panel for panel. Now I won’t lie to you, I was a little disappointed at the end of this book to find out that this was just Volume 1 and now we have to await Volume 2, “The Jungle” targeted for spring 2010. At the same time I’m overjoyed that this is not the end of this story and that more is yet to come. The story of our intrepid toys and their quest to save the boy from the Boogeyman is such a wondrous story that my first reaction of disappointment was overtaken by one of elation. I want this to be a finite story, because it really has to be to continue make this book work, but two issues would not have been enough.

In this issue our band of Max, Percy, The Jester, Harmony and the rest find their way into the town of Hopscotch. In some ways it reminded me of “The Prisoner” TV series as the town runs a series of games, but no one every wins. I’m not going to summarize the story because I want people to go and buy the book and experience it, but what this issue does is really start to establish the characterization of our cast. Percy (the piggy bank) is the most interesting since he is a secret betrayer to the group and yet, again I won’t give it away. I loved the bit about the toys did not want to let the real puppy into a room they were in because of the bad history between toys and animals. It would have been perhaps too direct to show a toy with a chewed off arm, but it could have been funny also.

The design and very subdued and muted coloring palette are the perfect finishing touch to this book. It adds the right mood and effect and was a great choice. It would have been very easy to go for the bright more super hero type effect. I also love the effect given to each page to make this feel like a book that came from years and years ago. It shows an attention to detail that while perhaps unnoticed on a conscious level adds to the subconscious appeal and feeling that radiates from this book.

It is nice to see in this business a smaller enterprise continue its efforts and succeed and hopefully become a major success. From Space Doubles to Creature Features, Th3rd World has produced some great conceptual ideas and gone out and sought talented people who maybe not the most widely known talents, but delivered some great stories. Both were anthology styled books which are notoriously hard sells and add to that being a small publisher and making those a success is an uphill battle to say the least. It is great to see that this group has what looks to be at least a critical success and hopefully a sales success (at least from an indy point of view).

I keep searching for the right phrase and one liner that will sell this book. Let’s go with, A tale of courage, friendship and loyalty that every young child knows their toys has for them, truly “The Stuff of Legend”.
Posted by Jim at Tuesday, October 20, 2009