Lenore - Jim and Lee Love it!

The publishers of Lenore sent us copies of the book and we were trying to get Jim, Lee and Gwen to do their reviews all at once, but Gwen's schedule would not allow her to add her voice. So thanks to Tom Green of Titan Books for giving us this opportunity and costing me money to have to buy the collected editions of Dirge's great work. 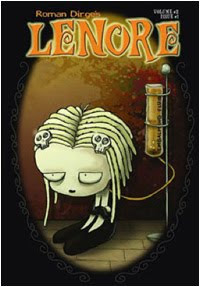 Jim: What a great book. I’m not sure why I had ignored Lenore over the years but it is a mistake that I now need to rectify. The art work and the design of the characters immediately captivated me and then the actual dialogue was just hilarious. Lenore runs up to Ragamuffin screaming and then immediately asks him about why he is wearing parachute pants. At that point she remembers she has a stick in her arm. It is absolutely hilarious. There are so many jokes on every page and the bizzaro world Lenore lives in seems perfectly normal as you are reading the book. The art sells it all. It has a charming quality to it that makes Lenore seem so innocent when she really is not. The Alien rift in the middle of her “origin” was flat out brilliant. I will be picking up the reprints of the old material coming out in February.

We even got a sneak peek of another Roman Dirge character “Samurai Sloth”, which is really just a four page story of the great samurai who has been trained by all the great masters. Of course he is killed immediately, because he is so slow – he is a sloth after all.

You know you have a winning book when you have stuff which is just laugh out loud funny as you are reading it. The back says Dirge is “an unholy union between Tim Burton and Dr. Seuss - Los Angeles Times” and that is an apt description as I can come up with.

Grade A - Just plain lovely and odd it is gross awesomeness! 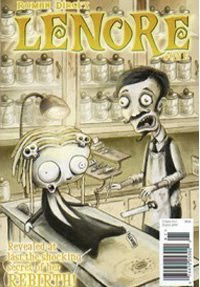 Lee: My opinions of most goth comics, if you want to call them that, were based upon Johnny the Homicidal Manic (JtHM). I read it years ago and it never resonated with me. I felt it was far too cynical and violent for me. Because of that, I’ve avoided most of these types of books. Of course, Lenore, one of the main stays of the goth comic scene, has been around for a long, long time. But, with a new series comics and my current love for all things non-superhero, I was very happy to receive a review copy.

Lenore manages to toe that fine line between the grotesque and comical in the fine tradition of Charles Addams and Gahan Wilson. It manages to use monsters and bumps in the night to humorous ends. This story revolves around Lenore’s encounter with a mortician that she scarred earlier in her undead life. He’s out for revenge and she’s just out to make balloon animals and have fun.

The story is fairly straight forward with jokes galore and is a good primer if your unfamiliar with the character. For the most part, the jokes work, with only a couple that completely fell flat. They were never laugh out loud funny, but the general silliness will bring a smile to your face.

I really liked the art. Dirge uses various page layouts with great success. The variety between four and nine panel pages kept it interesting. I really liked the character designs too. Lenore is both cute and strangely menacing at the same time. That’s a really hard combination to maintain but Dirge does it.

Overall, I’d give it a B and I’ll be back for more.

Check out Dirge’s website here. Tons of stuff here with comics, bios, and ordering information, worth the click.