Bob Burden Studios
Mystery Men Adventures SC by (W) Bob Burden (A) Various
Tenth Anniversary Edition! Reprinting the first four full-color comics of the project that brought about the cult classic Universal movie of the same name starring Ben Stiller, Janeane Garfolo and William H. Macy. These classics are reprinted here for the first time as a director's cut with restored dialogue and creator commentary. Unlike the light hearted movie, the tone of the comics ranged from the surreal to a gritty, dark realism and film-noir style, since unseen in comics. $19.95 Visit the Mystery Men site here

Lee: The Flaming Carrot is another of those infamous cult comics. I’ve read some stories and loved them, and also read some that were atrocious. Mystery Men was the spin off that eventually became a terrible movie. If you can forget about the movie, I’ve heard this was great, twisted fun and the cover certainly supports that. The price point is low enough that I’m willing to give it a try.
Jim: Wow, I know of Flaming Carrot and it does have a hit or miss quality to it. Lee, your sales pitch for this book though makes me want to read 20 pages before I buy it.

Lee: Marvel has the omnibus format and DC has the absolute format. And Kiss has the Kompendium format!!!! I might actually be interested in the McFarlane comics because of the Medina art, but the rest of it’s largely forgettable. It’s completely forgettable to me at this price.
Jim: Let's see, rock and roll comics a negative, McFarlane involvement a negative, 1280 page door stopper unreadable format a negative and it cost $75, forget it.

Desperado Publishing
Extinction GN by (W) Stephen Nilson (A) Kevin Stokes
Dr. Chris Perry spent the good part of his adulthood dealing with the dead. A brilliant pathologist, his position as Chief Medical Examiner at Queen Elizabeth Hospital provided him with the perfect working environment. A deadly virus swept across the globe, wiping out 90 percent of life on Earth, but some who were infected didn't die. Chris must find a cure for the disease before a madman, calling himself Hannibal, and his army sacks Chris' haven on Prince Edward Island and harvest the uninfected population as cattle. $12.99 See Kevin’s art here with all sorts of sample pages.

Lee: The hype hides the fact that this is a zombie comic very well. Ok, maybe not very well, but it doesn’t mention zombies anywhere. This is a smart zombie variant story so you can almost consider it new. The art looks good. So, if zombies are your thing, then this is for you.
Jim: Walking Dead is the only Zombie book that I'm following right now and there is no room in my list right now to chech this out.

Lee: This is another really tough call for me. I really like Russell and Bradstreet’s art. I know this will look beautiful. It’s a fancy hc which I love. But Barkers writing, with few exceptions, leaves me really, really cold.
Jim: See the art guy has an issue and I do not, because if I don't like the writer, no point in looking at the pictures that go with the story. 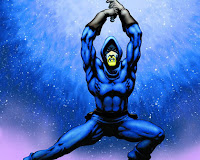 D. E./Dynamite Entertainment
Dreadstar: The Beginning HC by W/A Jim Starlin
Description: For the first time, the original, classic episodes of Dreadstar: Metamorphosis Odyssey from Marvel/Epic Illustrated are collected in full color under the careful direction of creator Jim Starlin. These gorgeous, painted pages originally appeared in Epic from 1979 to 1982, and introduced audiences to Vance Dreadstar and the other characters whose saga would be continued in the Dreadstar series. $29.99

Lee: This has been in previews more times than I can count. Just for a point of reference, Jim and I talked to Starlin at the 2007 Baltimore Con about the book. At that time, he was complaining about printing quality and delays and all sorts of problems with the book. This is great stuff so I’ll order it but I’m not holding my breath that I’ll actually see it.
Jim: I have ordered it also and remember that conversation we had with Starlin. Here is hoping it actually makes it to the printer this time.

Fanfare / Ponent Mon
Quest for Missing Girl by (W/A) Jiro Taniguchi
Mountaineer Shiga made a promise to his best friend following his tragic death in the Himalayas. Twelve years later and he is called upon to honor that promise. So when Shiga comes down from his Mountain refuge to look for his friend's missing daughter Megumi, all he finds is trouble. Nominated for an Eisner Award. 336 pgs. $25.00 Visit the Fanfare site here with previews

Lee: Fanfare is another small publisher that I really like. They seem to take the best of the best of foreign books and translate them for the rest of us. Between that and an Eisner nod, this is an easy buy for me.
Jim: I like the sound of this book and with Lee saying we have a decent publisher I will gamble on something like this. 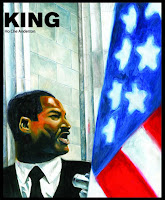 Fantagraphics Books
King Special ed. HC by (W/A) Ho Che Anderson
Ho Che Anderson has spent over 10 years researching, writing, and drawing King, a monumental graphic biography that liberates Martin Luther King Jr. from the saintly, one-dimensional, hagiographic image so prevalent in pop culture. Here is King -father, husband, politician, deal broker, idealist, pragmatist, inspiration to millions- brought to vivid, flesh-and-blood life. Out of print since 2006, Fantagraphics Books is publishing King: the special Edition, a newly designed volume that includes the original 240-page graphic biography, as well as nearly a hundred additional pages of extras, including: Black Dogs' is a 14-page prelude to King, a dialogue between a young black couple expecting a child, living in LA in the aftermath of the Rodney King upheaval, a raw and inflected conversation between husband and wife and their racial attitudes in a post-King world; Excerpts from the diary and notebook the author kept when researching and writing King, with interstitial notes written specifically for this volume commenting on the method he used to conceived and execute the book; Preparatory sketches, discarded images and pages, an interview conducted at the time of the 3rd volume's publication, and excerpts from the draft of the script; An epilogue titled Assassin, written and drawn for this new edition, in which Anderson explores the question of whether James Earl Ray actually shot King. Caroline Longstreet, one of the observers who comments on King's life throughout the book, is obsessed with the assassination, won't let it rest, and pursues her own private investigation and ultimately confronts the reasons why it's held her in its grip so long. Anderson's biography traces King's life from his childhood in Atlanta and his education at Booker T. Washington High School, and his subsequent centrality to the civil rights movement when, in 1955, he organized the successful Montgomery Bus Boycott; his founding of the Southern Christian leadership Conference in 1957; his Nobel Prize in 1964; his help in organizing the 1966 March on Washington and his I Have a Dream speech; and the tragic moment on April 4, 1968 when he was shot dead on the balcony of the Loraine Hotel in Memphis, Tennessee. Anderson's expressionistic visual style is wrought with dramatic energy; panels evoke a painterly attention to detail but whose juxtapositions propel King's story with cinematic momentum.. King won a1995 Parents' Choice Award. $34.99

Lee: I cannot wait for this! My library has the third tpb which dealt with King near the end of his life. I was curious to read it because of the good press and loved it. Unfortunately, I’ve never been able to find the first couple tpb’s so this is perfect for me. Incredible art and one of the best biographical stories comics ever, this is one of the best books that comics as a medium has to offer. I can’t recommend this enough.
Jim: Yet I will pass on it. The whole era of the sixties is real to me as I was a young child to a 15 year old in that time frame. There are parts that resonate with me and there are parts with the myth of some people has far outstripped the reality.

IDW Publishing
Complete Milt Gross Comic Book Stories Vol. 01 HC by (W/A) Milt Gross
This beautifully designed book collects the complete comic book stories of comic genius Milt Gross, culled from rare, impossible to track down comic books of the 40s, which have been lovingly restored. Milt Gross was a cartooning genius who was championed by Art Spiegelman in Raw and Dan Nadel in Art Out of Time. Gross wrote and drew what many consider to be the first graphic novel, He Done Her Wrong, and was a popular comic stripper (with hilarious cartoon-style Yiddish-isms), animator, and screenplay writer (co-writer of films with Charlie Chaplin). This thick, full-color, 368-page hardback tome, in addition to exhuming every one of Gross' wild and crazy comic book stories, shares rare photos, sketches, and unpublished art, including the previously unknown cover to the Milt Gross Funnies #3! Hardcover. Full Color. 368 pages, 8.5 x 11 $39.99. A short history of Gross and tons of scanned stories here

Lee: This is old school humor and comics at its absolute best. And, I mean that as the highest possible praise. People who write off kiddie books because they aren’t superheroes are making a huge mistake. Oft times, it’s even harder to make a kiddie book because you can’t hide mistakes in cross hatching or fist fights. This is going to be both funny and beautiful to look at and I can’t wait to get it.
Jim: I almost purchased this book also, but looked at my bookcase and order list and could not bring myself to place the order, but I do not disagree with Lee that it is a worthwhile book.