Jim: Well one thing we know is Image will never be purchased by Disney or anybody as Image is more of a packing house, then an actual company that owns anything. I think the creators own their creations 100% and Image probably only gets a cut of whatever is printed.
Lee: Yep. That’s all true. Not sure what this has to do with Image’s releases this month but I agree with the statement. 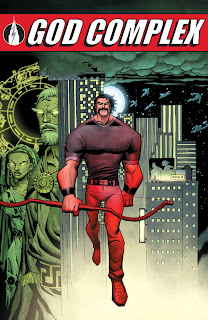 GOD COMPLEX #1
story MICHAEL AVON OEMING & DANIEL BERMANart JOHN BROGLIA cover MICHAEL AVON OEMING DECEMBER 232 PAGES / FC $2.99
The co-creator of POWERS and MICE TEMPLAR, MICHAEL AVON OEMING, brings you magic, monsters and GODS.Meet Paul, he's an everyday kind of guy. He’s kinda tall, kinda strong and kinda not mortal at all. Paul is actually Apollo (no, really) in hiding… from his family… the ancient Greek gods. Paul's father (you know, Zeus) would rather see Paul dead than living as a mortal… So, for Paul, being a god is complex... and dangerous...

Jim: I don’t know about this one. I hated that they had to pound us over the head with the complex pun. I get it, I get God Complex and his live if complex – sheesh!
Lee: With all of Oeming’s success, I’m still not sold on him as a writer. This seems like familiar territory for him so it should be consistent with his previous efforts. I still think I’m gonna pass. 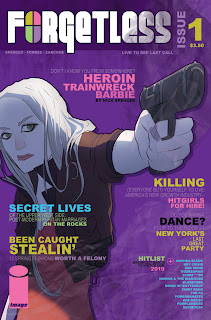 FORGETLESS #1 (of 5)
story NICK SPENCER art & cover W. SCOTT FORBES DECEMBER 9 32 PAGES / FC $3.50
The Forgetless nightclub is the biggest party in New York, and now it’s ending. But Sonia and Sara, struggling models turned professional killers, want to make sure it goes out with a bang. Derrick, a failed artist and hypnotist’s assistant happens to be the unlucky guy caught in their crosshairs! From the creator/writer of Existence 2.0 and 3.0 comes a drug and sex-infused black comedy about surviving until last call; Forgetless is perfect for fans of GO! And IGBY GOES DOWN.

Jim: I liked Existence 2.0, so I will give Mr. Spencer's next comic a try also. It has a good premise and looks entertaining.
Lee: Spencer is a good writer, and unlike many other Image authors these days, has proven that he can complete a story! It’s worth looking into. 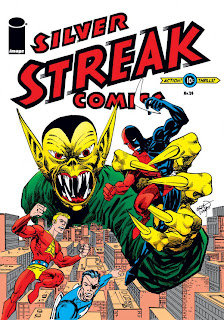 THE NEXT ISSUE PROJECT: SILVER STREAK COMICS #24
story ERIK LARSEN, PAUL GRIST, STEVE HORTON & MICHAEL T. GILBERT art ERIK LARSEN, PAUL GRIST, ALAN WEISS & MICHAEL T. GILBERT cover ERIK LARSEN DECEMBER 9 32 PAGES / FC $3.99
A NEXT ISSUE PROJECT PUBLICATIONTHE GOLDEN AGE DAREDEVIL! SILVER STREAK! CAPTAIN BATTLE! THE CLAW! Some of the greatest creations from yesterday brought back to life by some of the greatest creators of today! Back at last! Golden Age greats revived for a modern audience! THE NEXT ISSUE PROJECT is an ongoing series of comics that continues a classic canceled title! All stories are complete, self-contained and cool as all hell! All books are Golden Age sized, but these aren't simply an homage to Golden Age comics: They're updated classics for a new generation by modern masters!

Jim: Loved the last issue of Next Issue and I’m looking forward to this one. Of course I find it ironic that a company about creator’s rights is doing characters that are in the public domain, so no money has to be paid to the creators of the characters.
Lee: Jim was kind enough to send me this first ‘Next Issue’ and I loved it. It’s a fun book worth looking into. 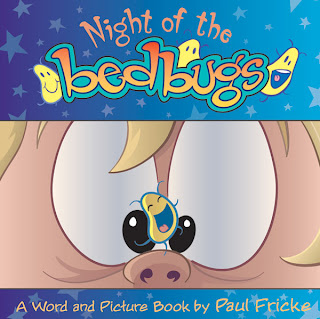 NIGHT OF THE BEDBUGS HC
story PAUL FRICKE art & cover PAUL FRICKE DECEMBER 2 32 PAGES / FC $12.99
A little girl’s bedtime fears are calmed when a friendly bedbug and his pals join her for a pajama party, singing her to sleep with a soft lullaby. With images lively and colorful mixed with the rhythmic, rhyming text, NIGHT OF THE BEDBUGS is engaging fun for insomniacs of all ages.

Jim: So kids’ books are part of Image’s mix, if you have a good kids book would you want a different publisher? I still think $13 for 32 pages is high.
Lee: And, I’m telling you that kids hc’s are that expensive! Olivia by Ian Falconer, $18. Any Dr. Seuss, $15. Even newer books like Fancy Nancy by Jane O'connor is $18. Kiddie hc’s are big bucks and big business. I understand why Image is going there, I just wonder if advertising in Previews is generating any sales. 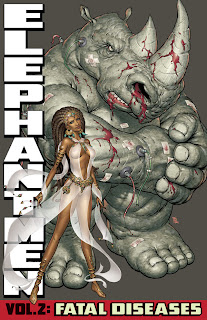 Lee: YOWZA YOWZA What a cover! What the problem??? She got clothes on. Just because their sheer and the artist took liberties with that doesn’t make it a bad cover.
Jim: That is an amazing cover, I mean she is essentially naked. So what is this comic about? 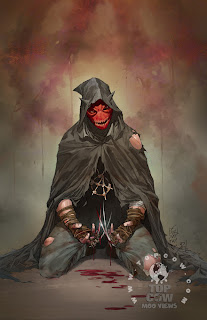 PILOT SEASON: DEMONIC #1
(W) Robert Kirkman (A) Joe Benitez (Cov) Marc Silvestri
From the creative minds of Image partners Robert Kirkman & Marc Silvestri!The demon is in his head. The demon makes him strong. The demon gets angry when he doesn't kill. Scott Graves is possessed and he will do anything the demon asks as long as it promises not to make him kill his wife and daughter. Scott stalks in the night as Demonic, a vigilante known for savagely slaughtering the wicked. He asks himself, how long can he continue living this way and what if the demon isn't real?Full Color 32 pages $2.99 pilot issue

Jim: I liked the other pilot seasons better with multiple writer instead of the all Bob Kirkman show.
Lee: Wasn’t Pilot Season supposed to showcase up-n-coming talent? Not be a showcase for an established creators ideas? Maybe I’m wrong but something seems to have changed.


Jim: I still think Image needs to craft an Image and a brand that helps define them better. I understand not wanting to be pigeonholed, but your brand needs to stand for something.
Lee: I think Image needs to rebuild trust with the consumer as much as anything else. The current impression I have of Image, whether right or wrong, is there are too many unfinished miniseries. It’s very hard to spend money on a story that’s never going to end! (Gemini anyone?)
Jim: Infinite Horizons, 76, Bonds and others I can't think of.
Posted by Jim at Saturday, October 10, 2009