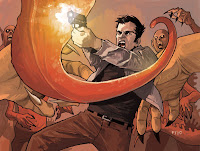 CRIMINAL MACABRE OMNIBUS VOLUME 1 TP
Steve Niles (W), Ben Templesmith (A), Kelley Jones (A), Michelle Madsen (C), and Fiona Staples (Cover)
In 2003 Steve Niles, creator of the 30 Days of Night comics series, launched a series of occult detective stories featuring the monstrously hard-boiled Cal McDonald. A pill-popping alcoholic reprobate, Cal is the only line of defense between Los Angeles and a growing horde of zombies, vampires, possessed muscle cars, mad scientists, werewolves, and much more weirdness! This volume collects the first two Criminal Macabre trades, the one-shot story Love Me Tenderloin, and Criminal Macabre: Supernatural Freak Machine—never before in trade paperback! TP, 6” x 9”, FC, 392 pages, $24.99
Lee: I love these smaller, right priced collections from DH. I’ve really wanted to read this material but haven’t had the energy to search for it in the back issue bins. Now, it’s all been collected in one place for me. Perfect! As for the material, good horror writer and awesome artists in Templesmith and Jones make this an easy buy.
Thomm: If it’s your genre, dive right in. I only dabble in the horror stuff, so I won’t be running out for this.

BALTIMORE: THE CURSE BELLS #1
Mike Mignola (W/Cover), Christopher Golden (W), Ben Stenbeck (A), Dave Stewart (C), and Francesco Francavilla (Variant cover)
Eisner-nominated series! Monsters are overrunning Europe, and Baltimore, the only one who can put an end to these horrors, must find and kill Haigus, the vampire responsible for this chaos. Following reports that Haigus is holed up in a cloister, Baltimore finds a haven full of death and black magic, and the creature at the heart of his obsession! #1 of 4, FC, 32 pages, $3.50
Lee: Didn’t you read the first Baltimore series when it came out? I seem to remember you and Jim declaring it ok but not great. Is it worth looking into?
Thomm: Jim probably read it, but not me. I think it’s fairly reliable that a Mignola series is going to be good, though. I like the lead’s name, for obvious reasons.

Lee: Wow, if you don’t like Star Wars or Buffy then DH really has nothing for you this month. That’s not 100% accurate, if you like $50 hc, then the latest Creepy Archive was released but other than that there really isn’t anything new this month.
Thomm: I’ve never found Star Wars or Buffy to translate all that well to comics, so, yeah, this is about it as far as I’m concerned.
Posted by Lee at Wednesday, June 01, 2011