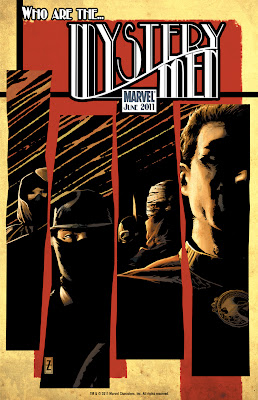 Mystery Men is an interesting book from Marvel. DC’s Golden Age is stock full of heroes that have been the subject of years and years worth of books detailing their adventures and histories. Marvel’s Golden Age hasn’t caught on in the same way. Sure we had Captain American, Namor, and the Human Torch, but that’s really about it. So not only are there plenty of obscure characters to pluck out of this time frame, but its also far less defined than DC, which allows the narrative space for a book like this, which creates a bunch of pulp heroes that Marvel never had.

The book is set during the Depression and follows the Operative, a Robin Hood-esque character who steals from the rich to help the poor and is very lucky that Fox News was not yet established to challenge his attempts to redistribute the wealth. Anyway, his girlfriend is kidnapped and killed by a secret organization trying to bring back a terrible fear god. He seems to be helped by a black hero named the Revenant who has some vague mist related superpowers.

The book does a very good job at setting itself during the depression era, using period pieces that are instantly recognizable to the reader as from the time period, such as behind the scenes at a broadway play, an upper class New York party, and the office of a murdered private eye. However, the introduction of the story’s supernatural elements, namely the story’s villain, the General, and the Revenant, do enough to separate from just another film noir homage. The introduction of a black character also gives me some hope that this story will continue to delve into some areas we’re not used to these kind of period pieces examining in future issues.

A lot of the credit for the book’s success has to go to Patrick Zircher, who has spent the last 10 years evolving from Marvel’s most dependable back up artist to one of the better looking artists in the industry. He does a great job evoking the period and integrating the more out there elements of the book into that period. He’s also a master at balancing the action scenes between keeping a good pace and using enough decompression to show the action in detail. Looking at this book, I’m genuinely shocked that one of the big two hasn’t already locked him in on an ongoing.

The star of the book, however, is David Liss. As Jim mentioned in his review a few days ago, Liss is a noted novel writer. Now I’ve never read any of his books, but I have read his work on Black Panther and at first, his background in novels showed. It was decent, but it was way, way, way too wordy. Black Panther has gotten better, but this book really shows how well Liss is starting to grasp the medium. He’s very economic with how and when he uses his dialogue and captions compared to his early work and manages to cram a lot of action, characterization, and plot into a single issue. This book shows that not only has Liss put a lot of work into mastering the mechanics of comics, but that it's paying off.

This issue is filling a niche that no other books at Marvel are filling right now and I can’t wait to read the next issue. Mystery Men has floated a bit under the radar, so if you like your superheroes pulpy, you'll definitely want to check this out.
Posted by Greg at Thursday, June 16, 2011