Lessons from a Runner 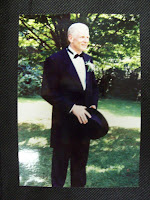 Robert L Remaley Jr (1941-1992) was a runner. He was a lot of other things in his life, but running carried throughout. He was a natural at it in an era before it was a trend. A disrupted childhood didn't allow for much in the way of team sports, and there certainly weren't the leagues for every sport under the sun like there are today. When he went to college he joined track and cross country. He excelled, too.

He kept on running through working as an elementary school teacher and principal and taking graduate courses. He started doing marathons, as well as 10k and 5k races. He had two sons, me being the elder.

A broken leg from being struck by a car while riding a bike slowed things down a bit but not for long. A move from suburban Philadelphia to rural central PA came with work as an elementary education professor, and the running and racing continued. A scratched cornea while playing touch football in Jamaica was another impediment.

A custom designed house on a hill overlooking 44 acres and a spousal separation later, he had a new significant other and shuttling of kids between residences. He took up coaching at a local college. The mid-forties brought about a vicious circle. Knee ailments led to weight gain, which caused knee injuries when trying to get back into shape. Weight related diabetes ensued, but change in diet and biking brought the weight down and eliminated the diabetes. Running returned.

From the time I was a kid I liked to run, but I was a sprinter. Where he had long legs and a short trunk, well suited for distance running, I had a more equally proportioned trunk to legs ratio. Most of my running was on the roads, though. With no track programs in my rural PA community I ran distance with him, or more often, Mom. I ran a race or two organized by a running club in high school. He won, of course.

Like him, I didn't run in organized track or cross country until college. I never was overly competitive at it, though, scoring all of 1 point in 3 years of track. I wasn't the natural at it that he was. Still, I continued to run through law school, and won some in intramural events there. 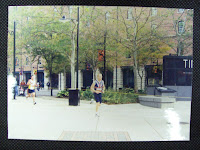 I ran few races with him, none after high school until Thanksgiving 1991. Home from school on break, I ran a Turkey Trot with him that was 5k. Though we had scouted the beginnings of the course before the race, I went out far too fast in the opening flat and faded fast in the hills that came after. I saw him pass me on one of those hills, but being in his race mode and doing well, he didn't see me. We found each other at the finish line, enjoying the time together and discussing how the race went for each of us. My then fiance was along with me on the trip for Thanksgiving dinner at his house, and we had a great time.

I went back to school and wedding plans. I got married in August of 1992. Three weeks later, in the midst of training for the Marine Corps Marathon in DC, he died of a heart attack. Asleep at the time, he never knew what hit him, or why. He had, all his life, an enlarged heart. Thinner walls because of the size meant that one eventually gave way, opening a 9 mm hole. Shot in the heart by his own genetics.

I learned many lessons from him in our 25 years together. Most didn't come from running, but some important ones did. The most important was self discipline and the value of repetition. Nothing will be accomplished in running if it's not done on a regular basis, repeatedly. Life has a lot of that, too. Want your kids to speak? You'll have to repeat yourself a lot. More so when you want them to listen to what you said when they're older. Almost all learning requires repitition for it to stick, most of us not having mnemonic memories.

There's also a great joy to be found in the singularity of running. Some like to run with others or with music. I, like he, do not do either. Aside from wanting to be able to hear my surroundings when running with traffic and the occasional loose dog or darting deer, there's an aloneneess with running that is akin to zen. More people would benefit from spending time alone with their own thoughts. Directing those thoughts to a run frees the mind to engage in the free flow of thought, from the trivial to the profound. All is an aspect of each of us and worth the time to know.

Of course, being an imperfact person like all of us, one lesson learned was a negative. Don't stop running and continue eating like there won't be any consequence. The period in his mid-forties when he stopped running was fraught with health problems as a result. A lot of hard, extra effort went into regaining his running form and fitness, not to mention his health. I'm in my mid-forties now and make every effort to avoid that path.

I hope that in many years time my own life, including running, will be an example my own kids can apply to their lives. Neither are runners, but running isn't required to apply the lessons of running to life. My daughter the dancer has already begun to learn how it applies to her passion. I'm working on my son's interest in soccer in hopes that he'll soon pick up that he needs to focus if he wants to continue, too. 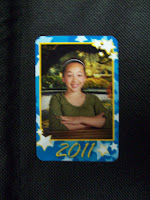 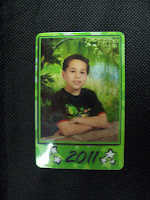 Happy Father's Day to all, and especially to Robert L Remaley Jr. I know with those two above that I'll have a great Father's Day.
Posted by Thomm at Sunday, June 19, 2011