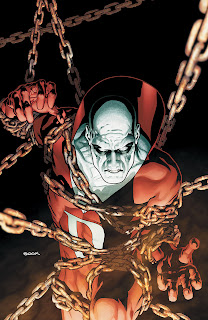 DC UNIVERSE PRESENTS #1Written by PAUL JENKINSArt by BERNARD CHANGCover by RYAN SOOK
On sale SEPTEMBER 21 • 32 pg, FC, $2.99 US • RATED TIt’s the start of a new series spotlighting some of the DC Universes’s most exciting super heroes! First up is Deadman, straight from the pages of BRIGHTEST DAY, in a five-issue epic where the body-hopping hero meets his match in a new foe who wants to make sure the souls that Deadman helps out go straight to Hell!

Jim: I love this idea of having a book that rotates what its lead feature will be. DC has tried this concept before with stuff like JSA and JLA classified, but this more free ranging idea should allow writers to pitch a good story idea for any character they choose. Of course this means it could be uneven as heck since the writer / artist combo will make or break each arc.
Gwen: I'm not sure how much this will work out in the long run but they've picked a good starting character to feature. The idea of giving some of the supporting characters in DC the spotlight for a bit is pretty cool though.
Lee: I thought it worked well on Legends of the Dark Knight. Granted, it was Batman, and this is open ended... but still. Another series that has potential in for a long run.
Matthew: I love Deadman. This seems like a promising idea -- too bad it has 51 other titles to compete with!
Thomm: Deadman's a dead duck. No way this series competes with all the other new DC titles that have a steady cast and creative team.

Greg: Every time a company releases a new anthology title, we always get excited and the book always goes away within 2 years. I hope this can be a success, but I'll be shocked if a) there is anything resembling a high profile creative team after this arc and b) its around in 2 years. And leading with Deadman is not exactly starting on your strongest foot. 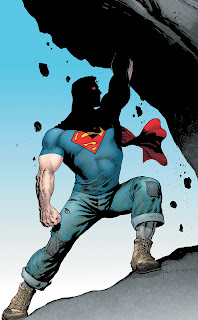 ACTION COMICS #1Written by GRANT MORRISONArt by RAGS MORALES and RICK BRYANTCover by RAGS MORALESVariant cover by JIM LEE and SCOTT WILLIAMS
On sale SEPTEMBER 7 • 40 pg, FC, $3.99 US • RATED T The one and only Grant Morrison (ALL-STAR SUPERMAN) returns to Superman, joined by sensational artist Rags Morales (IDENTITY CRISIS), to bring you tales of The Man of Steel unlike any you’ve ever read! This extra-sized debut issue is the cornerstone of the entire DC Universe!

Jim: Maybe the book I’m most excited about. Grant seemed to be at his best when writing Superman and Rags is one of my favorite artists, so the combination should be fantastic. My concern is that Morrison has already done the best Superman book ever with All Star Superman, can he do it again? My second concern, can Rags deliver a monthly book?
Gwen: Yeah, not sharing Jim's enthusiasm on this one. But who knows, every once in awhile I like Grant Morrison in monthly books. Like that one time with Batman and Robin.
Lee: I thought Rags was always good with monthly chores. Along with JLA, this appears to be one of the biggest titles in the new universe.

Matthew: Renumbering Action Comics is sacrilegious and a terrible idea, but it'll sell extremely well, I'm sure. The only other Morrison book I've ever really read was Joe the Barbarian, so beyond curiosity and an intense desire to like reading a Superman book again, not much of a draw. I'll still probably get the first issue.

Thomm: It's one of the better draws for this project. Might give it a shot.
Greg: Ok, here's something else to get excited about. The only problem is, as Jim noted, we've already read All Star Superman. That'd be hard for anyone to top, including Morrison. Also, years after Identity Crisis, Rags Morales gets another high profile assignment! About time! 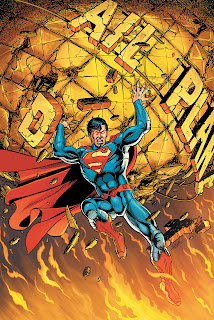 SUPERMAN #1Written by GEORGE PEREZBreakdowns and cover by GEORGE PEREZArt by JESUS MERINO
On sale SEPTEMBER 28 • 32 pg, FC, $2.99 US • RATED TThe new adventures of Superman begin here! What is The Man of Steel’s startling new status quo? How does it affect Lois Lane and The Daily Planet? There’s no time for answers now, because Superman must stop a monstrous threat to Metropolis – one that he somehow is the cause of!
Jim: This one caught me by surprise, but I like that George is doing breakdowns as I think Merino will benefit a lot from that help and I have a feeling this will be a great looking book. Again I was surprised by George Perez writing this book, but when he did Wonder Woman years ago he had some great ideas, but he overwrote the book. Hopefully a strong editor and maybe he has learned when to let the art carry the story.
Gwen: By the way I've liked DC redesigning Superman's costume without the red underwear on the outside. Good call DC!
Lee: To steal another blogs comment (Savage Critic), Perez is no longer buy on sight for me. He's good and I liked his WW run but that was 20 years ago. Maybe more. It worth trying an issue or two at least.

Matthew: The art's going to be fantastic and who can resist another Superman #1.

Thomm: Haven't seen new Perez in years so this is a good choice for me. I'd take this over Action.
Greg: I though this book would have an in-story explanation for that costume, but from the JLA promo art, it looks like that's going to be his new costume. Yuck. If this is the new costume, that's a terrible idea. Its a needlessly complicated update of the most beautifully simplistic design in comics. If it sticks around, we're going to look at this like the Super Pony Tail in a few years. 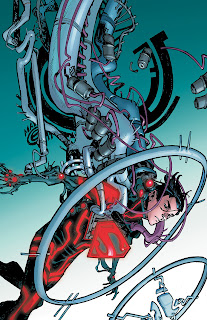 On sale SEPTEMBER 14 • 32 pg, FC, $2.99 US • RATED TThey thought he was just an experiment – and a failed one at that! Grown from a combination of Kryptonian and human DNA, the Clone was no more than a set of data to the scientists of Project N.O.W.H.E.R.E. But when the scope of his stunning powers was revealed, he became a deadly weapon! Now the question is: Can a clone develop a conscience?

Jim: Have to say it this is a bitter disappointment. Jeff Lemire and Pier Gallo were doing a great job on the recent re-launch of Superboy, Lobdell does not excite me. Plus no matter how you cut it Lobdell is a known buddy of Harras and it seems obvious why his name is all over DCNu books. Worse reading the solicitation it seems like Connor has been almost totally retro-conned out of existence and we are starting at ground zero for Superboy.

Gwen: Okay, I really liked Conner Kent - and honestly DC has spent a lot of time building his character. I have no idea who thought it'd be a good idea to restart the character - which is what it seems like they're doing. I really hope I'm wrong.

Matthew: I could care less about this character.

Lee: I agree with Jim on this one. This is one of the newer (last 20 yrs new) characters that seems to have been steadily built into someone interesting. Lots of change, lots of progression. Why does he need a complete overhaul? Starting over with a new Superboy really doesn't appeal.

Greg: I know that everything that's not Action and JL takes place a year after superheroes appeared, but I don't think spin off heroes like this work if the hero they're based on is supposed to be new. DC's trying to have their cake and eat it too. Also, Lobdell? Really guys, really?

Thomm: Why's he look like a cyborg on the cover? 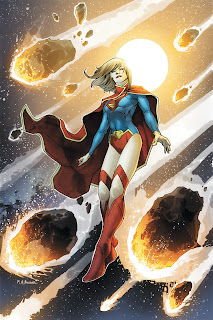 SUPERGIRL #1Written by MICHAEL GREEN and MIKE JOHNSONArt and cover by MAHMUD ASRAR
On sale SEPTEMBER 21 • 32 pg, FC, $2.99 US • RATED T Meet Supergirl. She’s got the unpredictable behavior of a teenager, the same powers as Superman – and none of his affection for the people of Earth. So don’t piss her off!
Jim: Again Supergirl has been retro-conned back to ground zero. Considering they rearranged her origin about five or six times in her last 60 issues I guess this is no surprise. It is a decent writing team and an artist who is on the rise, so maybe it will be good, but I have been hoping for a good Supergirl series for forever.

Gwen: Really? I give up on ever liking Supergirl ever again. I feel like the current version had really started to work out after the whole New Krypton thing where they fixed her Kryptonite poisoning. I was willing to go with that. And now lets revert back to an angsty teenage Supergirl - who doesn't like Earth on top of everything. Joy. Interesting costume redesign - I like most of it but they could have kept the skirt.

Matthew: Her continuity has been so convoluted that it's easy to get on board with a new version. I'm interested.

Lee: In contrast to Matthew, her continuity is so convoluted that it just drives me away. I didn't like the last version and there's little chance I'm gonna like this one.

Thomm: I'm with Matthew. I never cared about all her previous continuity problems and I like the idea of her having less fondness for Earth than her cousin who was raised here. Makes her less of a female copy of the Big Blue Boy Scout.

Greg: Its not about continuity, its about consistency. DC's not trying their second take on Supergirl in the past couple years, they're trying their 30th. No one's take on this character ever gets a chance to breathe. Anyway, I've got some hope for these writers cause I like their previous work, but yeesh, talk about a poisoned chalice.