Boom! Studios
Roger Langridge: The Show Must Go on SC by (W/A) Roger Langridge (W) Gordon Rennie
Harvey Award Winner Roger Langridge has been lauded for his work on The Muppet Show Comic Book, Thor: The Mighty Avenger, Doctor Who, and his groundbreaking Fred The Clown. This month while you are checking out his new KABOOM! series Snarked, make sure you grab this collection of Langridge's best, uncollected works. Feast your eyes upon such marvels as Fred the Clown's Flying Parsnip! See the Devil get outfoxed by the one and only Leppo! Behold the world's greatest swordsman, the Kabuki Kid! All this and the first time all of his Mugwhump stips have been compiled under one cover! $19.99
Lee: Do I really need to say more than “Roger Langrdige”? I shouldn’t have to but I will. His Mugwhump strips are just fantastic and have all the signature Langridge humor that you have come to expect from him. If anything, it’s even better because the humor is aimed at adults so it’s a tad bit more violent and risqué which just makes it even funnier. Great stuff.
Gwen: It's a good thing you said more Lee because I didn't get the reference.

Campfire
Three Men in a Boat Campfire GN by (W) Jerome K. Jerome, Nidi Verma (A) K.L. Jones
I had the general symptoms, the chief among them being a disinclination to work of any kind. So begin the hilarious misadventures of a merry, but scandalously lazy band of well-to-do young men - and a plucky and rather world-weary fox terrier named Montmorency - on an idyllic cruise along the River Thames. What they find instead is one hapless catastrophe after another. Soggy weather, humiliating dunkings, and the irritating behavior of small boats are just a few of the barbarisms our genteel heroes are forced to endure. 72 pgs. $9.99 Visit the official page here. Lee: The original Three Men book was great and my kids loved it so I am excited to see it adapted into comic book form. A great story that is sure to entertain the kids. And, it looks like it has some pretty stylish art too.
Gwen: I'm not familiar with the source material but I am intrigued - looks like a very cool concept that seems to fit well with the comic book genre. 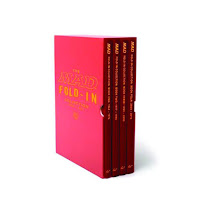 Chronicle Books
Mad Fold in Collection 1964 - 2010 HC by (W/A) Al Jaffee
Al Jaffee's Fold-Ins, which have graced the back page of Mad Magazine since 1964, have become an icon of American humor. Issue after issue, year after year, each fold-in requires the reader to simply fold tab A to tab B to reveal the hidden gag, a simple idea that masks both the undeniable artistic ingenuity and comic-timing at play in Jaffee's work. This deluxe four-volume set contains every fold-in that Jaffee has created to date, a whopping 410 fold-ins, spanning 9 presidencies, and countless fads, fears, scandals, and moments of shared cultural silliness. $125.00
Lee: Is there anyone who didn’t love the Mad Magazine fold in’s? I didn’t think so. You can still go to the magazine rack today and find at least one copy with the fold in already done. The question becomes… if I buy this and do ALL the foldin’s am I destroying resale value? Actually, if I buy this I don’t care about resale. Me and the kids are gonna sit down and do them for hours.
Gwen: Umm, yeah, I only vaguely remember Mad Magazine. Perhaps this not a phenomenon of my generation. Although I recall my Mom saying something about really liking Mad Magazine as a kid. I just remember something about a cartoon kid with really large ears. 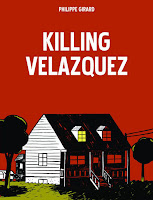 Conundrum Press
Killing Velazquez GN by (W/A) Philippe Girard
On hearing a radio report of an accused priest, Philippe is thrown back to his youth when he was faced with his parents' impending divorce, and moved to a new city. To help him adapt he joins a youth group led by a nonconformist priest who challenges Philippe to rethink his values. But as Philippe becomes more involved with the group and its charismatic leader he finds himself plunged into the center of an unexpected drama. Visit Philippe Girard here. $20.00
Lee: Conundrum Press is a great Canadian underground publisher and I always look forward to their books. Girard is a great artist and this sounds very, very interesting. This has a lot of potential.
Gwen: Wow, this looks very cool. Enough in just the solicitation alone to draw me in and make me want to check out the book on plot interest alone.

Gestalt Publishing Pty Ltd
Torn GN by (W) Andrew Constant (A) Nicola Scott, Joh James, Emily Smith
The city is damned, has always been damned, and the wolves have become us. Torn tells the story of how a wolf struggles when he is infected with the strongest virus the world has ever known - humanity. $12.95 Visit Gestalt comics here.
Lee: I’m calling this the long shot pick of the month. I am not sure what to really make of this. It sounds interesting in a metaphysical way, and has Nicola Scott on art so my interest is piqued. But beyond that I can’t find out anything about it. I wish there was something out there so I could make a decision on it.
Gwen: Him, then we're talking about metaphorical wolves? Because if people were actually turning into wolves that might be interesting. I mean, it may be anyway, but I am a sucker for shapeshifting genres. The artist is a cool creator regardless though. 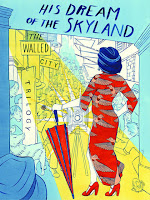 His Dream of the Skyland by (W) Anne Opotowsky (A) Aya Morton
Imperialist controlled Hong Kong, the British ruling classes, the ambitious dynasty influenced Chinese, all create an amazing labyrinth for His Dream of the Skyland, the first book in The Walled City trilogy. The Chinese-colonial inspired illustrations create an utterly distinct experience. His Dream of the Skyland immerses the reader in a world that is opulent, dark and absorbing. $32.95 I think this is Aya Morton here.
Lee: I find this far more interesting than Torn, but again, I can’t find anything about the book anywhere. Even the creators aren’t hyping it. The hype tells me nothing other than I won’t get a conclusion to the story. Asking me to spend $33 on an unknown page count with no clue what the story is about is just asking too much from the buying public. This is down right terrible. If it weren’t for Morton’s art, I wouldn’t even have picked it.
Gwen: The other problem is with such low marketing is that it's unlikely that it'll be found on a random bookstore shelf anywhere in order to flip through it.

Gumby Comics
Gumby's Arthur Adams Specials Collection SC by (W) Bob Burden, Steve Purcell (A) Arthur Adams
For the first time in 25 years the Eisner Award-winning Gumby Specials are available! Everyone's favorite boy of clay meets every comic fans favorite carrot topped Arthur Adams for a romp through the Gumbyverse sure to dazzle and entertain audiences for centuries to come! Don't be left out on this amazing once-in-a-lifetime book! $12.99
Lee: Gumby! Yahooo! Pages and pages of Art Adams art! Double Yahooo! Having read all of the original versions, I can tell you this is a ton of fun, beautifully illustrated book and I can’t wait to get my copy.
Gwen: What about Pokey? I always liked him best... 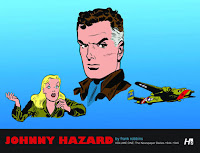 Hermes Press
Johnny Hazard Dailies Vol. 01: 1944-1946 HC by (W/A) Frank Robbins
Frank Robbins' masterpiece, one of the all-time greatest action/adventure newspaper comic strips, Johnny Hazard, will finally be back in print! When Johnny Hazard first saw publication it was near the end of the Second World War and the first storyline finds Johnny escaping from a German prisoner of war camp by stealing an enemy airplane. From there his adventures were packed with never ending action, Veronica Lake-esque women, and classic bad guys. Reproduced entirely from original King Features press proofs. $49.99
Lee: Robbins was a master draftsman in both strips and comics. Even though I really wanted this, I was gonna pass until I saw that this was going to be reproduced from the press proofs. This should be gorgeous to look at, and at the height of the adventure strip, a great read too.
Gwen: To high priced for me for the small interest I have in the material. I'd like to borrow it from someone if I got the chance for $50 is too high for me in this case.