Super 8 and Green Lantern Aren’t All They Could Be

When’s the last time you tried to do it twice in one day? The older you get, the less stamina you have for such an ambitious endeavor -- No matter how excited you are about the prospect. Case in point, last Friday Jun 17, when I saw Super 8 in IMAX at 1000 and Green Lantern in Real3D at 1420. After thoroughly enjoying both THOR and X-Men: First Class, I was really looking forward to both these films, hence the scheduled day off from work. Although, the pre-release negative buzz on Green Lantern, which I tried my best to ignore, influenced my decision to see Super 8 first -- when I was wide awake. Yes, by the time I saw GL, I was struggling (strike one) – it was during my normal “day off” nap time, so keep that in mind when I get to it.

So, I had just finished an early morning round of PT (translation: I didn’t get to sleep in very much), before heading off to the local theater. With her mother up for the day to watch the little ones, my wife was to meet up with me no later than 0930 to purchase the tickets. I arrived earlier, so while I was waiting, I moseyed over to the Green Lantern poster on the outside wall. I was studying his mask, specifically how it looked like it was painted on his face, when this guy walks up and starts telling me that I look like Hal Jordan [Note: NOT Ryan Reynolds]. I have short brown hair, but that’s about where the similarity ends – although I’m sure a green mask would help with the lines on my face. It would’ve been a classic Candid Camera encounter, because…The Guy. Wouldn’t. Stop: “Are you Green Lantern?” he persisted, repeatedly. Then it got worse. He started asking people walking by, if they agreed with him! It was embarrassing. I was concerned that people might have mistakenly thought that I actually believed him and was enjoying the attention, rather than see me as the polite, innocent “victim” that I was. I finally couldn’t take it anymore and hid inside the lobby, so that he would go away. I told my wife when she arrived, knowing that if there were any hint of truth in his outrageous claims, she’d let me know. “You look good, but…” Chalk that up as another contributing factor to my Green Lantern experience (strike two). But we’re not there yet, folks – that’s over four hours away – it’s time for Super 8. 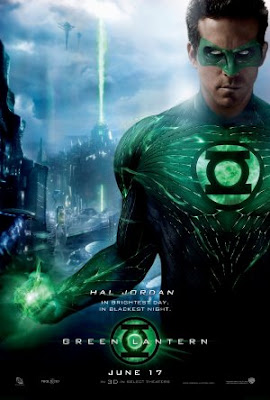 On early Saturdays
Or late Friday nights
Comics And...publishes
The posts I write.

We get "hits" a plenty
But comments are slight
Unless we're controversial
Like Lee on Moon Knight!
There will be SPOILERS throughout…

J.J. Abrams must secretly want to film part of my life story, because he has a way of really hooking me in during the very first sequence. In Star Trek (2009), Kirk’s father dies without ever holding his son (I don’t think he even gets to see him on the view screen). Super 8 opens in a local factory, focused on an accident board where a guy is changing the dates from several hundred to one. We find out later, that the mother of main character, Joe Lamb, was killed on the job, because she was filling in for someone else’s shift when the tragedy occurred. So, if the drunken slob, father of Alice – the romantic interest of Joe, had gone to work that day, he would have died. Nothing could be more realistic to me. Of course, one of the earliest missteps of this film is that they prolong the “mystery” of Alice’s father’s connection with Joe’s mom and dad, the town-deputy sheriff, for too long. You first wonder if he might have had an affair with her. I suppose it was all designed for a big reveal later on, but it didn’t work completely. Also, when the two dads (in bitter conflict at the beginning of the film) finally “kiss and make up”, the forgiveness is great, but the resolution still seemed a little too quick.

One of the big draws for me seeing this picture was that it was a period piece set in the summer of 1979. Although the kids were slightly older than I was at the time (they’re getting out of middle school, maybe between 7th and 8th grade, while I was only between 3rd and 4th in real life). Regardless, the film captures the era PERFECTLY! When they’re showing the inside of someone’s bedroom, with the board games, shag carpet, models, posters, paneling, etc. – I’m there all over again. The entire ensemble cast of Joe and his group of filmmaking friends is awesome, funny, and wonderful. It’s so good in fact that it kept me from disliking the film when the plot was derailed…literally.

The kids while conducting a midnight filming of a zombie-flick along the tracks witness a train wreck. With boxcars dropping like hailstones, the kids miraculously survive, but that’s somewhat believable (for a movie). I was even okay when they discover their old science teacher deliberately drove his truck onto the tracks. Maybe he was committing suicide or just drunk. No, he wanted to stop the train to free the massively destructive, people crushing, Cloverfield-looking monster that was brutalized by the EVIL US military. The military was portrayed so unsympathetically; it was ridiculous. Even if I had read the free DC comic preview (which was quite good and a clever way to have a comic book connection in a summer of "comic" films) beforehand, it still wouldn’t have provided enough motivation for the Air Force officer and ALL his soldiers to be acting so poorly towards the townspeople. 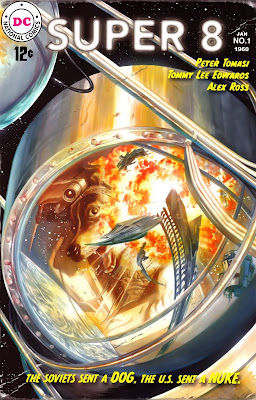 I had major problems with the monster too. I didn’t like the way he looked, he seemed really destructive and evil, but then at the end you’re supposed to have an ET moment and wish him a fond farewell. [Oh, there should be a warning on every trailer if the music they play ISN’T the music from the actual film. They play something you’re emotionally attached too to get you to want to see it. I think they used a few notes from ET on this one.] What was he doing with those people in the cave, preparing to eat them or just hanging them upside down to chat with them? It was BAD, but the nice thing was that (like a frog in a pan of hot water) you didn’t really realize how bad and convoluted it was until you got to the very end. All these red herrings to enhance the mysteries, such as the monster is terrifying to the monster is just a misunderstood victim, just made it difficult to switch gears when you finally got the real scoop. This should have been an exceptional, moving film, but all the missteps (and a full bladder for the final hour) left me detached. During the credits we actually get to see the finished film that they were making all along – it’s GREAT (better written from start to finish then the actual movie). Don’t see it for the monster story, see if for the kids and a chance to experience 1979 (if you missed it the first time-around).

The best part of Green Lantern for me was taking my 13 year-old son out of school (like I did for Iron Man). He asked me what was going on and I said he had “an appointment”. He asked what for and I slyly redirected his inquiry with a question of misdirection. “Did Mommy tell you about the Dentist?” Of course, she hadn’t, because he wasn’t going to the dentist. He was pretty stoked when we pulled into the theater and even happier when he realized we were seeing it in 3D. After the movie was over we had one of those all important father-son urinal chats. “What did you think?” he asked. “It was okay.” I said unenthusiastically. “I thought it was okay too.” he responded. I questioned him later to make sure he wasn’t just echoing my sentiments and he said that’s how he really felt about it.

Okay is better than horrible, but it’s not very good either. It’s only marginally better than a “C” or “Average”. So, what went wrong? Well, I thought it went too fast. Sure, it was a linear story and was faithful to the comics, but compared with Super 8, which spent a great deal of time developing its characters, GL was just BOOM here they are. I never felt that Hal ever really stepped into the hero role either. I liked Sinestro and I liked Hector Hammond. I thought it was dumb that they killed Hector off. I hated Parallax and it was a total joke that the entire GL Corps wouldn’t even go to Earth to help him. It was even more ridiculous that he and he alone defeated the entity. Although unintentional, the funniest line was when Kilowog was taking credit for training Hal…for LESS THAN TEN MINUTES!!! I really enjoyed the scene where Carol tells Hal she knows who he is behind the mask. The energy construct sequences were good, but overall there weren’t that many and they ended too quickly.

I would have preferred that they had really followed the comic (from the 60’s) and NOT had the Guardians or the Corps in this movie AT ALL. Let him do some Green Lantern-ing around Earth for awhile first. Having him just fight Hammond would have been sufficient. It really felt like a TV movie, rather than a big-budget Hollywood flick. It reminded me of the series-finale of Smallville a little. “Was that it?” The distant flying sequences certainly were of the same quality. Oh, and I missed the extra scene (strike three)! I wasn’t expecting it in a non-Marvel film and I certainly wasn’t anticipating that Sinestro would take the yellow-ring so soon, especially after Parallax was already defeated. What was his motivation, jealousy? I was really looking forward to this film a month ago and it just didn’t meet my expectations. I mean THOR made me rush out and write a review the very same day and I’m still taking about how great X-Men: First Class was. I’m sure I’ll enjoying watching some scenes over again on Netflix someday, but as a whole it was only “okay”.

Now, I’m starting to worry about Captain America a little…

I read the Green Lunkhead spoof in MAD magazine last night before going to bed. I know it's supposed to be a parody, but in this case it's pretty faithful to the film. So, if you don't have the cash to see GL in 3D, buy this instead -- CHEAP -- (better yet check it out at the library like I did or flip thru it in the store). In the backgrounds they have just about every green pop culture character in the Green Lunkhead Corps such as Kazoo, Broomhilda, the green M&M girl, little sprout from Green Giant commercials, Kermit, Baby Bop, Shrek, etc. -- It's hilarious! 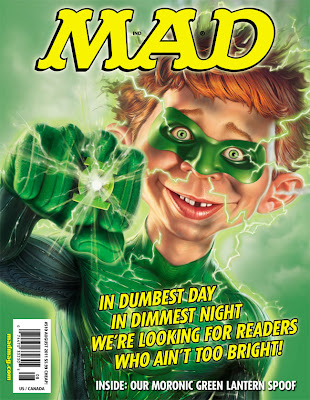