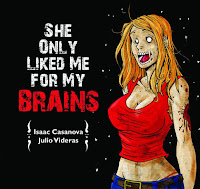 Kettledrummer/Diabolo Edicione
She Only Liked Me for My Brain One-Shot GN by (W) Julio Videras (A) Isaac Caanova
The Zombie Apocalypse is upon us, but no need to fret! If you prefer your horror tinged with acid wit and populated by buxom, gun-toting vixens, then look no further! She Only Liked Me For My Brains, by Julio Videras and Isaac Caanova, is just the thing for you! $16.00
Lee: I’m lucky enough never to have heard this. Girls have said they only liked me for my HUGE BICEPS, and six pack abs, and one even said “you have the cutest little tushy I have ever seen.” I take it back, one girl did say she liked me because of my overwhelming knowledge of all things comic related. Ahhh, the good old days of geek love. I wonder if that counts for she loved my brains? Oh well. Try this book, you’ll like it.
Gwen: Oh wow, I think I need to get this as a gift for my friend Corey. I wonder if I can keep it away from him for the months until Christmas. 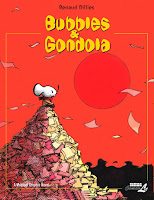 NBM
Bubbles & Gondola HC by (W/A) Renaud Dilliès
On a background of Django Reinhardt, this jewel of poetic fantasy is a fairy tale for all ages with spot on observations about life. Charlie is a mouse who's trying to write but has a block. Writing is a solitary endeavor. A bird named Solitude comes to visit him to keep him company. We're never sure he actually exists but in Charlie's mind, yet he brings him out into the world, dares him to experience the unknown, unblocking his little existence. A drama about the blank page for Charlie who so wants to make the world more beautiful with his writing, we are transported into a tender and moving tale with a twinge of lyrical melancholy yet sweet, warm and ultimately elevating. $16.99. A short bio here.
Lee: The first plus: I read Dilliès earlier work Betty Blues (long oop) and it was excellent. The second plus: NBM publishes some of the best Euro reprints in all of comics. The third plus: it just sound fantastic. I am soooo getting this.
Gwen: Aww, this looks really cute. Also I can sympathize with writer's block. What a great pick. 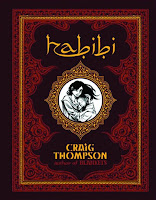 Pantheon Books
Habibi GN by (W/A) Craig Thompson
Habibi is a deeply romantic story that explores and celebrates the beauty and cruelty, the complexity and depths of the Islamic world. Craig's stunning artwork is matched by the haunting strories of his characters' lives. Set in a mythical Middle East, at once contemporary and timeless, Habibi is a parable about our relationship to the natural world, about the cultural divide between the First World and the Third World, and about the common heritage of Christianity and Islam. The magic of storytelling allows us to see the fragility embedded in cruelty, to understand how beauty can preserve us from destruction and how love can save us from loss of hope. 672 pgs. $35.00 Visit Craig Thompson’s blog here.
Lee: If you haven’t read Thompson’s seminal piece “Blankets” then start there. But be warned, it beautifully draw and written and emotional gut wrenching. But, then again, maybe that is what makes great comics. This looks to be more of the same and is one of the most anticipated releases of the year.
Gwen: I never really though about it before but Indies are kind of a cultural anthropologist's dream. I mean, seriously. You could probably write a book or three on comparing cultures through comic books alone and the Indies are the place to look. 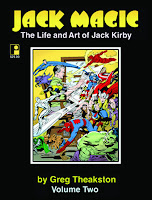 Pure Imagination
Jack Magic Vol. 02: Life & Art of Jack Kirby by (W) Greg Theakston (A) Jack Kirby
Witness Jack Kirby up close with almost 200 illustrations that support 160 pages on the King of Comics. From the Marvel era to past the end of his life, Kirby's influence is investigated. Unseen art kisses unknown fact. Theakston writes an insider's view of what happened. $25.00 Here’s a sample of Theakston’s writing, great stuff and full of Kirby talk, see here.
Lee: Even by my love of comics history, I am not sure that we need another bio of Jack Kirby, but that was until I read some of Theakston’s latest blog. He has got a way of telling a story that makes it incredibly entertaining. At the same time, his voice is… shall we say call a spade, a spade honest. Anyone else and I would pass, but this looks to be too entertaining to be missed.
Gwen: I'm sure it will be very entertaining but regardless of its wow factor I'd still rather not read a Jack Kirby bio. Maybe when I have more time to read.

Rebellion / 2000AD
ABC Warriors: Black Hole GN by (W) Pat Mills (A) Simon Bisley, Steve Dillon
The Termight Empire was able to expand across the universe once an artificial black and white hole was constructed on Terra. Now Nemesis the Warlock's wayward son Thoth, on a quest for vengeance against Torquemada, has destabilsed the cosmic subways around the Termight Capital bringing destruction to Terra. Nemesis, in an attempt to stop the end of time has sent the ABC Warriors into the dreaded Time Wastes. The fate of everything hangs on the success of seven ex-war robots, even as the comrades begin to fight amongst themselves. $17.99

Hondo City Law GN by (W) John Wagner (A) Frank Quitely
Hondo-City is the Japanese equivalent of Mega-City One; a large, sprawling urban mass policed by Judges. Culturally, however, it is totally different. While on the forefront of modern technology, the Hondo-citizens remain tied to the roots and customs of feudal Japan, including the way in which the women are treated as inferior to the male populace. Though the Samurai-like Judge-Inspectors are seen to be in charge, the Yakuza crime Syndicates still have a hold on power. Here is a slice of Hondo-City law. $18.99
Lee: These two books have been in and out of print for so long it’s incredible. The ABC Warriors is not only a good story, but has painted Bisley art that is mind blowingly good. It’s worth it for that alone. The claim to fame for the Hondo City book is it’s early art by Frank Quitely. The story is ok, but the art really, really carries it. Both are worth it if you haven’t tried them before.
Gwen: I'm not sure why but Hondo City Law gives me an eerie feel of feudal Japan mixing with Judge Dread - but I could be completely off.

Simon & Schuster
Amelia Rules Vol. 07: Meaning of Life SC by (W/A) Jimmy Gownley
Some things in life seem so broken, they can't possibly be fixed, and just about everything is falling apart for Amelia. Aunt Tanner is away on tour; Amelia's spending more time in the principal's office; Joan's dad is injured just before he is supposed to come home; and Amelia's friends all seem to be moving in different directions. Amelia thinks G.A.S.P.'s clubhouse is beyond repair, but Turnip Brain says that when that happens, you need to pick up the pieces and make something new. Soon, Amelia sees the wisdom in Turnip Brain's words and realizes that things are not always as they seem and that the glue that allows us to make new things out of the old is love. $10.99
Lee: I’ve talked about Amelia before, but I shall say it again. This is GREAT! It’s one of the best tween/all ages books I’ve ever read. I actually have all of these in hc because the kids destroyed the first trade so fast. They love them too. Be warned, it does deal with some real issues like divorce, and growing up, and all sorts of stuff. But it’s never a talking down too. One of the best books on the stands, both humorous and touching, and worth every penny.
Gwen: See, I think that makes it a good kids book - dealing with real issues.

Viz Media LLC
Ten Billion Days & One Hundred Billion Nights Novel by (W) Ryu Mitsuse
Ten billion days--that is how long it will take the philosopher Plato to determine the true systems of the world. One hundred billion nights--that is how far into the future he and Christ and Siddhartha Gautama will travel into the future to witness the end of the world and also its fiery birth. Named the greatest Japanese science fiction novel of all time, Ten Billion Days and One Hundred Billion Nights is an epic eons in the making. Originally published in 1973, the novel was revised by the author in later years and republished in 2001. 360 pgs. $25.99
Lee: Ok, this is a novel and not comics but it sounds really, really cool. I love my sci fi novels and I am always interested to see how other cultures write them. And, let’s just get it out of the way now, it’s sounds like the opening to a really bad joke doesn’t it? Plato, Christ and Siddhartha Gautama go into a bar….
Gwen: That's an interesting combo. I'd be interested in exploring Plato's philosophy in such a way alone but the combo of philosophy makes it even more intriguing.

Vertical Inc
Velveteen & Mandala GN by (W/A) Jiro Matsumoto
Teenage girls, Velveteen and Mandala, take refuge along a river in the Tokyo outskirts of Suginami. Residing together in a fully-equipped army tank the pair are essentially all the separates their neighborhood and the rest of Tokyo from a full-on zombie invasion. While the countless undead may appear to threaten their survival, cohabitating with each other may expedite their ultimate demise, as they fight over technology, sustenance, personal space, maybe even the affection and attention of the opposite sex. 360 pgs. $16.95
Lee: Only the Japanese could weave a high school drama, coming of age, with zombies and make me interested. I am sure this is going to be packed with absolutely ridiculous zombie scenes along with lots of girl fights too. It sounds like fun.
Gwen: Has anyone else ever wondered about the Japanese and their school uniforms. I mean, I never wanted to wear a uniform when I was in high school but the Japanese comic creators make them seem like superhero costumes or something.

Lee: Another strong month even though I picked a couple of books that I couldn’t find anything about. Oh well. Lots and lots to choose from.
Gwen: Sooo much to choose from - I think Lee has a hard time restraining himself.
Posted by Lee at Friday, June 17, 2011