Lee: Something different this month. I ran out of time to comment so I am picking and letting Thomm and Greg comment. I shall comment on a few books but mostly it’s gonna be the happy twins today. This should be good… really, really need that sarcasm font.
Thomm: This should be good. I only read one Marvel book right now.
Greg: I'm sure this will be all sunshine and roses. I think I'll need a drink for this.

FEAR ITSELF #5 (of 7)
Written by MATT FRACTION
Penciled by STUART IMMONEN
Cover by STEVE McNIVEN
The blockbuster Marvel event of the year continues!
Thor. Hulk. Thing.
The fight to end all fights. And while it rages, the Serpent's forces deal Captain America a blow not even he can withstand. 32 PGS./ $3.99
Lee: Hummm, that’s interesting. It appears that the name on the lead armorine is B. George. I wonder if it’s Boy George?
Thomm: Didn’t Cap just come back from being dead? What blow can’t he withstand?
Greg: The snark of the internet. Can he cope with a review from pitchfork? FIND OUT HERE TRUE BELIEVERS! 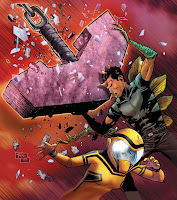 AVENGERS ACADEMY #17 & #18
Written by CHRISTOS GAGE
Pencils by SEAN CHEN (#17) & TOM RANEY (#18)
Covers by BILLY TAN
FEAR ITSELF TIE-IN. Trapped in the Infinite Mansion with murderous demigods, the heroes-in-training of Avengers Academy must do the unthinkable...or die! Is this the issue where the students choose evil? Find out as August delivers two issues of the series that IGN calls “the under-appreciated gem of the Avengers franchise.” 32 PGS. (each)/ $2.99 (each)
Thomm: Is “the under-appreciated gem of the Avengers franchise” a compliment? If the Avengers books suck, that’s faint praise. As heroes, shouldn’t they choose death over evil? Do they fail their training either way? I’m just so full of questions.
Greg: Well, open minds and all that I suppose. This is probably the best teen superhero book on the market. If you liked New Mutants or Generation X, its worth a look. Oh wait, I didn't go back far enough, did I? If you liked the Newsboy Legion its worth a look.

ULTIMATE COMICS ULTIMATES #1
Written by JONATHAN HICKMAN
Art by ESAD RIBIC Cover by KAARE ANDREWS
The Republic Is Burning. The next era has begun. As our heroes struggle to find their place in the world, the The Ultimates face game-changing threats even they can’t handle. And with the heart of the team missing in action, the country’s last stand of defense may be on its last legs. Critically acclaimed writer Jonathan Hickman (Fantastic Four, FF, Secret Warriors) and superstar artist Esad Ribic (Uncanny X-Force) drive the Ultimates into new and deadly territory! The series we’ve all been waiting for! 32 PGS./Rated T+ …$3.99
Thomm: I’m so not the market for this. I don’t think I’ve ever read any Ultimate universe books. My level of disinterest is not being overcome by the teaser’s callithump.
Greg: For an imprint that was supposed to be designed as easy to jump into and relatively continuity free, the Ultimate books sure forgot their lesson, huh? That said, this looks like a strong relaunch for the line. Guys like Hickman and Spencer do stuff you don't really see elsewhere in mainstream comics and are exactly what these books need.

SPIDER-ISLAND: EMERGENCE OF EVIL - Jackal & Hobgoblin #1
Collecting AMAZING SPIDER-MAN #129 and #238-239.
76 PGS./ $4.99
AMAZING SPIDER-MAN: INFESTED #1
Collecting material from AMAZING SPIDER-MAN #659-660 and #662-665.
32 PGS./ $3.99
Lee: Let me see if I understand this, the new Spidey mega event Spider island is being collected as single issues even as the event goes on? And then will be collected again later? Is it me or does this seem like gouging?
Thomm: All events are all about gouging. This is just amping it. I have no longanimity for this sort of thing.
Greg: Oddly enough, I think these are designed as an affordable/easy way for fans to catch up if they haven't been reading the Spider-books. Hard as it is to believe reading this column, there are people who don't think this stuff is complete garbage but also don't read everything. Strangely enough, none of those people write for this blog.

CAPTAIN AMERICA AND BUCKY #621
Written by ED BRUBAKER & MARC ANDREYKO
Penciled by CHRIS SAMNEE
Cover by ED McGUINNESS
The acclaimed team of Ed Brubaker, Marc Andreyko, and Chris Samnee bring you the next chapter in the definitive history of Cap and Bucky's early days. What was Cap and Bucky's first mission together? And what was the tragedy that happened on it that changed everything about who Bucky was? 32 PGS./ $2.99
Thomm: Oh, look. More revisions to character history. I liked it when Bucky was just the stand up sidekick who died at the end of WWII. Should have let him rest in peace. And what’s with the numbering? No way there’s been a title of this exact name for 621 issues.
Greg: Cyborg Russian Assassin Bucky is awwwwesome. I'm not sure if the world is crying out for this book, but that is a helluva creative team. Probably worth a look.

INCREDIBLE HULKS #635
Written by GREG PAK
Pencils & Cover by PAUL PELLETIER
"HEART OF THE MONSTER" CONCLUDES! THIS IS IT! The finale of Marvel scribe extraordinaire Greg Pak’s heralded Hulk run, and he’s not leaving without a fight! Or in this case, an uncompromising beatdown unlike anything the Hulk has ever endured. All the stops have been pulled out and nothing is off the table in this crushingly climactic issue brought to life by acclaimed artist Paul Pelletier, a must-read event for any and all fans of the Green Goliath in this awesome, extra-large final issue! 48 PGS./ $3.99
Thomm: You know, there’s a certain sameness to the teasers after awhile. The hero(es) engaged in some epic fight that’s the greatest of all time, written by someone who’s supposed to be the greatest since Kirby and the artists is some phenom or other. Why put out previews if you’re not actually going to say anything about what’s in the book?
Greg: I dunno, I think the end of the Pak run is the selling point here. I can't believe he's still on this book. World War Hulk feels like it took place ages ago.

THE PUNISHER #1
Written by GREG RUCKA
Penciled by MARCO CHECCHETTO
Cover by BRYAN HITCH
TIME TO GET BACK TO WORK. For Frank Castle death comes easy...life is where things gets complicated. Fully loaded with the Eisner winning writer Greg Rucka (Batwoman, Queen and Country, WOLVERINE) and neo-superstar artist Marco Checchetto (Amazing Spider-Man, Daredevil), the BIGGEST GUN of all returns with blood on his hands and vengeance in his eyes. As New York City's body counts continue to rise, the city's streets are teeming with more methodical criminals than ever and a police force doing it's best to keep its head above water. The Punisher has returned to serve his own brand of justice with everything's he's got... but can he survive the darkness stored in his own arsenal? Plus bonus pages exploring some of the new personalities in Frank's life...and how closely intertwined living is with dying. 40 PGS./ $3.99
THE PUNISHER #2
Written by GREG RUCKA
Penciled by MARCO CHECCHETTO
Cover by BRYAN HITCH
THE HOTTEST LAUNCH OF THE SUMMER CONTINUES. Hunting for the villains behind the Wedding Day massacre, The Punisher will leave no body unturned! With Detectives Bolt and Clemons on his tail, the massacre’s only survivor will seek the Punisher’s aid…which might be the worst of all possible choices 32 PGS./ $2.99
Thomm: Ok, finally something I might actually buy. That’s only because Rucka is the writer. He’s great with the non-super powered heroes, so this should be up his alley. None of that over the top stuff I didn’t pay any mind to.
Greg: I actually think that Rucka's stuff can be a little samey sometimes (maybe HE'S writing the solicits!) but he's got enough of a back catalog of good crime stuff that this is definitely worth a look.

GAMBIT: FROM THE MARVEL VAULT #1
Written by SCOTT LOBDELL
Penciled by GEORGE TUSKA
Cover by DAVID YARDIN
X-Man Gambit joins the Champions to take down the Mental Organism Designed Only For Killing! From those halcyon days gone by when the Champions were L.A.’s premier super-team comes this amazing assemblage featuring: Ghost Rider, the Black Widow, Angel, Remy LeBeau and the demi-god Hercules! The Champions are in a desperate race to stop the malevolent MODOK from coming into possession of the Scroll of Vishota. With such a parchment in your control, world domination is but moments away. Looks as if the ragin’ Cajun showed up just in time! 32 PGS./$2.99
Thomm: I don’t know if I’ve ever rooted for the villain so much, especially without having read the story. If MODOK had killed off all these guys, but especially Gambit, life would have been good. ‘Course, they’d all be back from the dead soon enough. I wonder if comic book companies (that would be DC and Marvel) have the least concept that the finality of death is an important element of being human and to remove it from characters makes them less sympathetic and engaging. I guess it doesn’t matter if your target audience is still in the stage of thinking it’s immortal.
Greg: I contributed far too much money to the Lobdell family during the 90's. I shan't be making that mistake again.
Will Thomm ever cheer up? Can Greg withstand any more of Thomm’s insanity? Will the pain never end? Find out tomorrow true believers!
﻿
Posted by Lee at Thursday, June 23, 2011