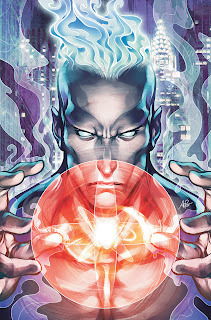 On sale SEPTEMBER 21 • 32 pg, FC, $2.99 US • RATED T
Charged by nuclear energy, possessing vast molecular powers, Captain Atom has the potential to be a literal god among men – a hero without limits. But the question is: Will he lose himself in the process?
Don’t miss the start of a legend from writer J.T. Krul (GREEN ARROW, TEEN TITANS) and artist Freddie Williams II (JSA ALL-STARS)!

JT on CA, Atom not America.

Jim: I see this as a miss. JT has done nothing that makes me can’t wait to read his work. Maybe he will one day, but JT looks to be a mediocre writer. Freddie on the other hand did great on Red Robin, but his JSA All Star work was too glossy and over rendered. I think Freddie could benefit from a good inker and a toned down color palette. Add to that the fact that Captain Atom has been made into a convoluted character and this series is not getting me jazzed at all.
Gwen: Never got into this character so can't say I'm terribly interested this time around either. He seems to work better as a supporting character in other book (at least in the stories I've read).
Lee: And it's series like these that actually get my interest. The truth is that there is only so much you can change about Batman, Superman, & WW. The true test of the new DC is going to be the secondary books. Is DC really going to push it? Are they going to try something new with old characters? Only time will tell. As for this book, the word of mouth at the LCS on Krul's handling of Green Arrow was... not kind, to be kind. And for that reason, I shall wait and see what the reviews say.
Matthew: If I want to read Captain Atom, I can dig out my old Pat Broderick books.
Thomm: I know Captain Atom came first, but I don't think he can be done any better than Watchmen.
Greg: Ok, this. Right here. This is why I am extremely dubious of the DC relaunch. I cannot imagine why JT Krul is involved in any capacity of this relaunch. Not only does he have a thoroughly mediocre track record at DC, he is responsible for Rise of Arsenal, one of the worst comics of 2010. For those who missed this particular gem, this comic involves Arsenal wacked out on heroin fighting a bunch of thugs to protect a dead cat that he thinks is his dead daughter. He wrote that and he's getting more, not less work. 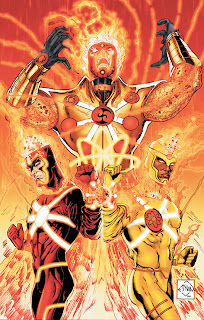 THE FURY OF FIRESTORM #1
Written by ETHAN VAN SCIVER and GAIL SIMONE
Art by YILDIRAY CINAR
Cover by ETHAN VAN SCIVER
On sale SEPTEMBER 28 • 32 pg, FC, $2.99 US • RATED T
Jason Rusch and Ronnie Raymond. These two high school students are worlds apart – and now they’re drawn into a conspiracy of super-science that bonds them forever in a way they can’t explain or control. The dark secrets of the murderous Dog Team and its Firestorm Protocol force them to put aside their differences to confront a threat so terrifying that it may lead to a new Cold War! Welcome to a major new vision of nuclear terror
from writers Ethan Van Sciver and Gail Simone with astonishing art by Yildiray Cinar!
Jim: This character is beloved by many, but has never been one that has generated fondness for me, having said that this book is intriguing in that we have Van Scriver and Simone teaming up as writers. Van Scriver has no other writing credits to his name, so I think teaming him up with someone is a great way to go. Cinar is okay, but a little on the generic super hero art side, but still learning. All in all this book will get a three issue try out from me.
Gwen: And another character I'm not all that interested in. Even so, every time I do read a book with this character in it I wonder how the character functions. The boys seem unwilling to ever work together.
Lee: So, in an effort to contradict myself, I shall say this appears to be too much change for me. All the changes in Captain Atom seem natural. To me, it seems that we now have a 'firestorm force' not unlike the Flash's 'speed force' which means I, hypothetically, can get an unlimited number of Firestorms. Wow, that sounds dumb.
Matthew: This is some serious restructuring, but Firestorm IS a character beloved by me so I'm very curious if this will be good. I just hope Ronnie and Jason's differences aren't totally centered on racial issues.
Thomm: Maybe they can have a debate on whether blacks should assimilate in America or maintain a nationalist stance. Sorry, that came up in the local press recently, though I hadn't heard such a discussion in about 20 years. Anyway, I have no real interest in Firestorm, but Gail Simone is a major draw.
Greg: Interested in this purely cause of Gail Simone's involvement, but bringing in any character who is not Ronnie Raymond should help this book dramatically. 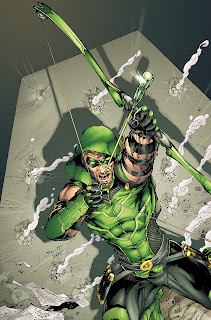 Jim: This book has to be one of my top "I will get issue #1 but that is about it", books. JT on the story, Dan and Norm on art (great layouts, still very super hero generic) and a character that I’m totally over and done with. DCNu wants to generate excitement, this is not it.
Gwen: Green Arrow has become worse and worse ever since the whole wedding thing. And actually the wedding was a bad idea too but the book itself actually worked for awhile as a sort of family-team book.
Lee: Wow, do I not care. Gotta agree with Jim. This appears to be fluff for the sake of shelf space.
Matthew: Nothing inspires more than a criminal super-hero. I don't care for this hero anymore either.
Thomm: I liked leftist, humours Ollie. Don't much care about this guy.
Greg: QCORE! YEAH! 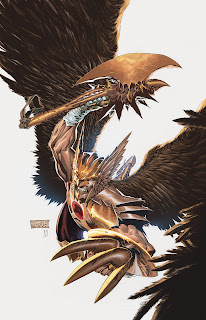 THE SAVAGE HAWKMAN #1
Written by TONY S. DANIEL
Art and cover by PHILIP TAN
On sale SEPTEMBER 28 • 32 pg, FC, $2.99 US • RATED T
Carter Hall’s skill at deciphering lost languages has led him to a job with an archaeologist who specializes in alien ruins – but will the doctor’s latest discovery spread an alien plague through New York City? No matter the personal cost, Carter Hall must don his wings and become the new, savage Hawkman to survive! Witness the start of a new action series from writer Tony S. Daniel and artist Philip Tan that will take Hawkman where no hero has flown before!

Jim: Again I’m bored reading the solicitation. I get that DC wants Clark Kent to be Superman forever and Bruce Wayne as Batman forever, but no one, I mean absolutely no one is clamoring for Carter Hall to remain Hawkman forever. Like Green Arrow now would have been a perfect time to take the series in a different direction. Add to that Tony Daniel, who has been a weak writer, with Phillip Tan, who to my knowledge has yet to hit a monthly deadline and you have a recipe for a crap book.
Gwen: Does it really matter at all if Carter Hall is still Hawkman? Seeing how Hawkman is just a reincarnation of his previous self? So really he'll essentially always be Carter Hall anyway.
Lee: Well, it only took Jim until Part 2 to get on the "new face under the mask" rant. Beyond that... do I really need an all new, all savage Hawkman? Didn't Johns do that a couple of years ago with limited success. There doesn't seem to all the much new about this.
Matthew: Maybe I can pick up the Silver Age Hawkman Archives at Comic-con instead. I like the Thanagarian Hawkman, put Carter back on Earth 2!
Thomm: Meh. What's new about this launch?

Greg: When Johns brought Hawkman back however many years ago, he drew off some stuff from Hawkworld and introduced the idea of Hawkman as a more brutal superhero. And this made sense since he'd lived for so long, but it has since come to overwhelm everything else about the character and its become kinda boring. But hey, he's not using a mace any more, he's got an AXE! That's change I can believe in. 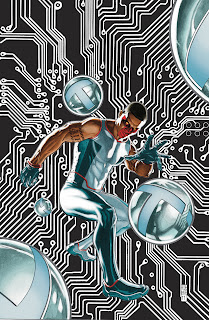 MISTER TERRIFIC #1
Written by ERIC WALLACE
Art by ROGER ROBINSON
Cover by J.G. JONES
On sale SEPTEMBER 14 • 32 pg, FC, $2.99 US • RATED T
The world’s third-smartest man – and one of its most eligible bachelors – uses his brains and fists against science gone mad in this new series from Eric Wallace (TITANS) and Roger Robinson!
Michael Holt is the head of a successful high-tech corporation and an institute that recruits and encourages the finest minds of the next generation to excel. As Mister Terrific he inhabits a world of amazement few others know exists, let alone can comprehend.

Jim: This is more like it. Of course Greg Rucka writing would have been perfect, but Mr. Terrific is a great character and deserves a chance at a solo book. I wonder if in this continuity if he has been part of the JSA. Heck what is funny is this character is now over ten years old. The bottom line is I’m looking forward to this book and wish DC had tried out more JSA characters in their own books.
Gwen: Mr. Terrific does deserve a chance at a solo book - but the cover makes it look like he's gone disco dancing.
Lee: Sounds like Batman without the cape and insanity of the Joker. This has potential.
Matthew: I don't have any attachment to this character, which is a sure bet that it'll be a GREAT book that I WON'T be getting.
Thomm: Not being a long time fan of Mr Terrific, I've always wanted to know who the smartest and second smartest guys are. Again, nothing much new to this re-launch.

Greg: I like that DC's giving new characters a chance at solo titles and I especially like that they're diversifying their universe, but that's a weird solicitation. Is about him being a superhero or is he in the matrix? Perhaps he's going to Oz? Anything's possible in the DCnU!