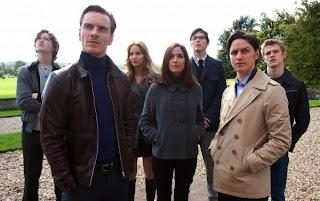 No long winded review this time. No Spoilers. But, I will say that X-Men: First Class is AWESOME!!! Clearly the best of the X-Men franchise. It's such an engrossing story and the characters are fantastic. I'm sure there were some flaws, especially with the second tier characters, but that's probably because they didn't have enough screen time. I'm not going to over analyze it. The people at FOX obviously knew what they were doing (making a period film and weaving the various X-Men histories together this way) and they've just reinvigorated the entire series, meaning I want to at least watch the first X-Men film again. However, what I really want is more X-Men in the past with this cast! 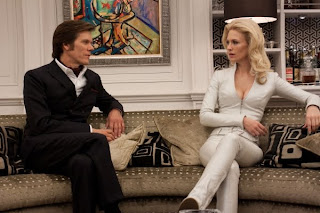 Who knew Kevin Bacon could be such a good bad guy?

There are a lot of subtitles and you don't have to stay to the very end (unless you just dig the music), but this is a great film. It's not like Thor or Iron Man, not like Dark Knight. Not really like the other X-Men movies -- it's its own thing. I loved it and can't wait to see it again! Too bad the X-Men comics weren't so convoluted -- I'd like to see more stories based on this continuity.
Posted by Matthew at Saturday, June 04, 2011