Flashpoint Wednesdays – Comics Can Be Fun

While I have been vocal in my concerns over the DCNu, the lead-up is a lot of damn fun.
This week we have Citizen Cold, Deathstroke, Emperor Aquaman and Frankenstein and the Creatures of the Unknown. When I’m reading a MU or DCU books I usually want some continuity and each issue to be building towards a conclusion. When you get the fill in issue it normally feels like you are treading water. This stuff is out and out fun and I was almost dreading Flashpoint and all the mini-series.

What I’m enjoying is that no matter how odd the circumstances or even the that the logic of why these characters are acting the way they are in this world, the writers are all just jumping into the story and then telling us a story. Would Aquaman be such a bad guy as he appears even with time being changed based on how he has been crafted, I don’t think so, but the story is fun. By having just three issues it seems like the writers have stripped everything down to the bare bones and these stories are all telling us lots of information at a brisk pace. Even better they are not trying to fill in all the blanks they are just getting to the meat of the plot and running. 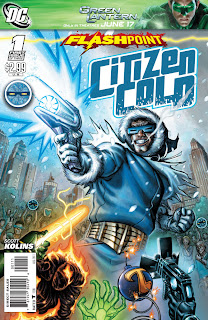 Citizen Cold starts with a battle between him and Mr. Freeze, where Citizen Cold actually kills him. Iris West is chasing the story of Citizen Cold and her nephew Wally West is trying to help her sort out who is Citizen Cold. We get some background on the other Rogues and their dissatisfaction with Citizen Cold, we learn Cold is not a good guy and we see Wally getting captured, maybe killed by Cold at the end of the issue. While I’m still not a fan of Scott Kolins current style this was the best this type of work has looked from him. Furthermore he did a nice job of writing this story. It was fun, crazy and was over before you know it. 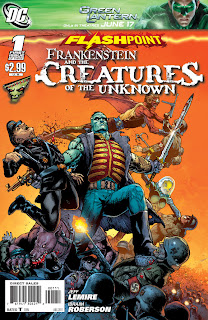 Frankenstein and the Creatures of the Unknown was a little more straightforward by Jeff Lemire and Ibraim Roberson, in that we get a quick origin and then move into the crux of the story. Frankenstein and a fish girl, werewolf and vampire (the later three altered by science from regular humans) are a combat unit in WWII. They are led by a Lt. Shrieve and they attack Hitler’s bunker and kill him. Cut ahead a year bad guy general pulls the plug on the group and puts them in suspended animation. Cut ahead to 2011 Franky and company wake up and run off to Gotham. New bad guy General has just the person to kill them, Shrieve a monster hunter and obviously the granddaughter of their old unit commander. Another great story and actually seems to have nothing at all to do with Flashpoint per say, except Flashpoint gives the writer great freedom to play in the DCU without any rules or constrictions. 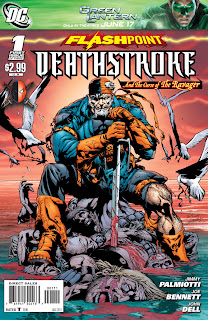 Flashpoint Deathstroke by Jimmy Palmiotti and Joe Bennett was a book that sounded odd making Slade a pirate, but it worked. It jumped in time a little here and there, but still did a great job. Deathstroke is floating on some wreckage in the water and we learn how he got there. He and the Warlord (Travis Morgan) are rival pirates and have a fight. Slade is trying to find his daughter Rose who has been kidnapped. He saves one girl, but it is not Rose. He recruits some bad guys as he needed more crew and then runs into Emperor Aquaman who skewers Deathstroke like a pig on his trident. I assume Aquaman scuttles Deathstroke’s ship and that is how issue #1 begins. No details on a lot of stuff just put out a story and plot details and tell the story. All these issues are paced so well and are fun, fun books to read. 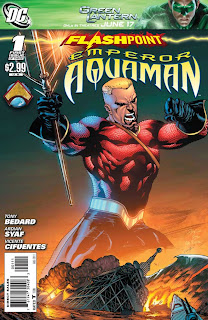 Last and not least was Emperor Aquaman. Now Tony Bedard used the eight months ago, eleven months ago, two weeks ago, tomorrow around lunch, time jump stuff way too much. He should have done a flashback here and there, but he should have trusted his story was good enough and it was. Aquaman is an enemy of the surface dwellers and he has used Geo-Force as a weapon to sink most of Western Europe. His brother Orm is his main advisor and Mera lost her head in dealings with surface people which makes Aquaman a pretty darn angry and unhappy dude. Plus his battle with Wonder Woman has been at a stalemate until he finds out Tara is being used by WW as a defense against his pulse weapon (actually Geo-Force strapped into a device).
Fast, furious and fun. We jump into the middle of stuff and just run forward. A shared universe stripped of 99% of the rules of what you can do. A liberating experience for me and I think the creators, who have all turned in comics that I enjoyed reading. Can’t wait for next Wednesday’s Flashpoint books and can’t wait for part 2 of these little gems.
Posted by Jim at Thursday, June 09, 2011