Totally going off script this week and throwing away all the rules. Two reasons, two series came to very different type of endings and I had the chance to attend the DC Retailer Road Show. Also the overall books this week were not the strongest, so no book really grabbed me.

The endings I wanted to discuss were Captain America #619 and Fables #106, but books are continuing in a fashion, but both books hit some strong endpoints. I’m slowly coming to the conclusion that more comics need to be written with an ending in mind and let the natural course of the story come to that conclusion. The never ending story feature is probably the most corruptive influence in good story telling that has ever occurred. Echo, 100 Bullets, Locke & Key, New Frontier, Watchmen and many other stories are better for having an ending. The character does not have to die, but the story needs to end. It promotes growth, change and a willingness to tell a story from beginning, middle to end. 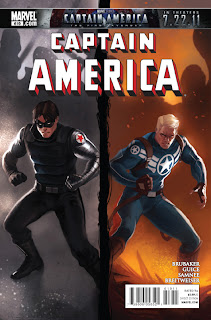 aptain America was an odd duck as Bucky escapes from the Gulag, but the story directs you to Fear Itself and we know he gets killed. Yet inside the comic that has been focused of his story he never dies, in fact he died a couple of weeks ago in Fear Itself. This issue was so anti-climatic that I felt cheated by it. Plus there was a lot of story about Bucky that was left open and I guess we will never see that story. In some ways dying in the type of fashion it makes sense that Bucky did will leave some open issues, as no one has everything tied up perfectly before they die, especially when they die unexpectedly. The problem I have is with how this was handled. It disrespects the fans who want to avoid major events. Issue #620 could show a different view of Fear Itself #3 and let the fans of this book see him die, but this way is just odd. I’m also unclear why Marvel thinks, starting next issue, a WWII series for Cap and Bucky will be a hit. I understand having that type of series out with the movie, just feel like WWII books are too old fashioned. All in all I thought Brubaker did a nice job building a flawed hero with a rich and complex history. I want to see more of this character and actually look forward to his second resurrection in the future. Still as an ending it was abrupt and I thought handled poorly for the fans of the series. Finally, since it is a continuing series, it feels like it didn’t even set up the next chapter, which is supposed to be Captain America and Bucky #620, which could legitimately be a new number one. 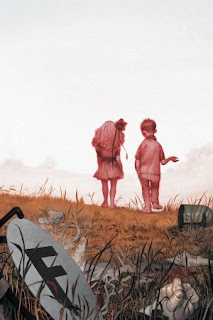 Fables #106 was also an odd ending. The North Wind battles Mr. Dark and takes him out in about nine pages. The rest is an epilogue. Fables ended the war against the adversary and then floundered until setting up Mr. Dark, now Fables could just end, but it needs a new reason to exist and not a third round with an evil overlord. This is the problem with the never ending story. It is fine to end a story and start a new one, but Fables has now cycled the same story twice. I enjoyed this ending better then the ending with Geppetto, but I sure as heck don’t want the next story to be them fighting Geppetto again or Mr. Dark in a few issues. Conflict makes for good stories, but if the writer is out of ideas, let the story end and come back once a solid new story is in place. I think endings scare too many people, but making something finite only enhances its value. Look at all the great mini-series or runs on certain comics, they were better because they ended. To get way too philosophical look at life, it has more value because it is finite.

Anyway my premise that we need more comics to have endings can segue into my feelings towards the DCNu, because I think it would be great if they would green light a book like Captain Atom, but once the main story is told let the book conclude. He doesn’t have to die, but that point of the characters life has hit an endpoint and the next chapter does not have to be chronicled. How about the next chapter is he takes a few months off and we see him in a year when a new conflict arises.

The presentation by Dan Didio, Jim Lee and others regarding the re-launch of the DCU was impressive. I have been a critic of Dan Didio and often wondered if he did not over mandate stuff and in fact did not screw up the DCU more than anything else. His promotion to co-publisher from an outsider viewpoint was absurd, now I understand. Didio gets what is wrong with comics and DC is making one heck of a bold stab to fix it. They are trying to mold the line into something that is dynamic, pushing the way they tell stories and pushing artists to make the books a little bolder. Dan should have filmed his words and should go out and tell the fans what he told the retailers about the content of the books. It makes sense, more action; every issue should count, more about private lives and supporting cast, putting some of the heroes in the earlier stages of their careers and trying to make the art jump off the page. In addition push to make sure deadlines are met so that a comic ships every month on the week it is set to ship. They went into many other things about marketing, retailer materials, etc., but what I walked away with was a firm commitment to make this work or they may be looking for a job. I’m willing to give all of their books a shot, maybe only one issue, but I could feel the sense of commitment from these guys and the seriousness of this venture. Finally they talked about the some of the planning they have done and that made me feel like this time DC has a plan and before it was too much about trying to fix book A and book B and not aggressively attack the entire line.

Of course the next two weeks we have an 11 part DC preview review where we will sing praises and throw stones at titles we haven’t read, but the proof is always in the actual books delivered. So I feel fair in casting stones at this stuff if I have no faith in what is being advertised, but I do believe DC is making the right type of efforts and understand what is wrong and are trying to fix it.

A couple other notes, first its official I’m no longer the target market for main stream super hero comics. I have known this for awhile but it really hit home when I saw the news for the new mini-series from Marvel called Avengers 1959. This is about the retro-con piece that Bendis did with making Nick Fury pulling together the first unofficial Avengers. The group is Sabretooth, Dominic Fortune, Namora, Kraven and Bloodstone I believe. Chaykin will be the creative force behind the series. Stuff like Agents of Atlas, Mystery Men, X-Force and this are my favorite books coming out of Marvel. The main stuff bores me, which means I’m not their target market and I should no longer worry what they want to do in the main books because the market doesn’t care if I’m buying that stuff or not. Secondly, I want to wish a fond farewell to Gene Colan who died recently. He was a great talent, in many ways I felt his style never fit super hero work because it was so dark and moody and it is a shame he was not around once the genre got more diverse as he would have been great in noir type stories. Of course that is why his Tomb of Dracula stuff was so great; his style fit it to a “T”.