As long time readers know, Greg has been hyping the glories of Franken-Castle for some time. I suffered through many a review filled with cries of FFFFRRRAAANNNKKKKEEENNNNCCCCastle. But, based upon his incessant campaigning, I decided to give it a try. So, was Greg right? Let's find out. 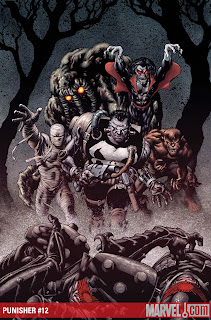 PUNISHER: FRANKEN-CASTLE HC
Written by Rick Remender with Daniel Way & Marjorie Liu
Penciled by John Romita Jr., Tony Moore, James Harren & Stephen Segovia
The short summary, The Punisher is hacked into little pieces by Daken, Wolverine’s son. The Legion of Monsters “fixes” Frank and brings him back to life. Apparently there is a team of Japanese monster hunters killing all the monsters in the Marvel U., and The Legion of Monsters, comprised of Morbius, Living Mummy, Manphibian, and Werewolf by Night, need help protecting all the innocent creatures from being slaughtered. Lots of fighting and killing ensues. Then Franken-Castle decides to kill Daken for killing him and lots more killing occurs. Actually it's not so much killing as hacking each other to bits for several issues. At the end, Frank in unFrankened and all is good. Collecting Dark Reign: The List - Punisher, Punisher #11-16, Franken-Castle #17-21 and Dark Wolverine #88-89. 338 PGS./ $39.99

The Good: This is a fun, filled adventure full of lots of destruction and over the top fanboy moments. The first half of the book sets up the premise nicely, and manages to alternate between an issue of punching and an issue of talking/plot/character development. It also uses a ton of leftover bronze age characters perfectly. As soon as the Legion of Monsters appeared, I knew I was in for a good time and by the time Franken-Castle does a speedball special with the Man-Thing, my inner fanboy was squealing with delight.

I read the oversized hc, and the art looked great. There were a couple of books that looked rushed towards the end but overall it’s perfect for the material. After Fear Agent, Tony Moore made the jump to the big leagues in a big way. 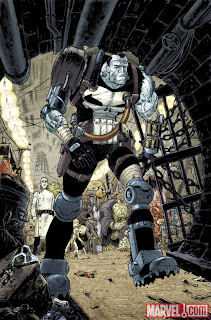 The Bad: For as good as the first half of the book is, the second half doesn’t really rise above pointless punching for 5-6 issues in a row. All pretence of characterization is gone in favour of the characters running over each other with cars. The series collapses into a mess of violence, blood, and stupidity as Daken fights the Punisher, and for the sake of variety Wolverine joins in too.

My problem with the second half comes from the fact that: (1) I don’t find Daken interesting in the least, and when Frank calls him “a second rate knock off of another character” I couldn’t help but agree and (2) the action was based upon each character inflicting increasing levels of damage on the other by ever more impressive ways and it never mattering because everyone had healing powers. May I point out that there is a difference between healing powers and outright immortality? It should take longer than 10 minutes to heal when you have broken arms with bones sticking out of the skin in strange directions.

Conclusion:
The highest praise I can give this book is too call it a modern day, Bronze age book. If you look at almost any Marvel comic book from the 70’s, you can apply the 80/20 rule. 80% of the pages are devoted to the fight between heroes and villain, and 20% of the pages are the soft characterization-plot stuff. That’s the best description I can give this book. It’s all sorts of sound and fury and just enough characterization.

All the characterization was front loaded to suck my into the story and it worked perfectly. But, by the end, I was ready for it to be over… and thankfully it was.
Posted by Lee at Wednesday, June 01, 2011