The Week of June 15 Review

The five week month inevitably leads to a few less than stellar weeks. Essentially the publishers spread out their output for the four week cycle into five weeks and unfortunately the dearth of consistently superior titles leads us to some mediocre weeks.

The Flashpoint books this week were basic entertainment, but I found them to have limited comment worthiness. The one thing I found amusing in the Flying Graysons’ book is that Dick is still shown as shorter than his father, just as he is shown shorter than Bruce all the time. It drives me crazy because I know it is a way to just make him seem less than Bruce, but often sons are taller than their fathers.

The regular DCU books almost feel like an afterthought at this point as all the series have a pointless feel to them since we know some screwy continuity changes are coming. Given that I still will be giving a review to Batgirl as that book was just flat out a good comic.
Marvel books were all okay with X-Men Prelude being the longest brooding Scott Summer sequence ever, Avengers exposing how boring and dumb Fear Itself is, Alpha Flight showing Eaglesham needs an inker and less glossy coloring and (Red) Hulk concluding what appears to be a pointless two issue digression.


From the everything else category we had a one shot from Northlanders that seem to lack a coherent story as to how the girl became the leader, Cindy was excellent but the penultimate chapter that had a weird transgender twist I did not see coming, Hellblazer was another penultimate chapter with a guest artist that made it almost feel like it was a kids book. 28 Days ended the series on a high note and the appropriate scary note, Dejah Thoris series is a nice expansion of the history of ERB’s Mars work and Invincible and Godzilla get a more formal review below. 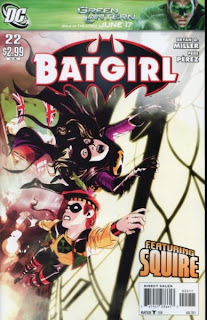 What I Liked – Pere Perez does a great job on the art. He has a light line and a realistic style that is fluid. His expressions are fantastic and convey all the emotions of Stephanie and Beryl (Squire). The story itself was a great one and done action romp in London.

What I Didn’t Like – Reading the book and knowing that this is all ending. I have moaned incessantly about this, but DCNu appears to be throwing out the baby with the bath water. Stephanie is a great Batgirl.

Overall – This has been a rock solid series, with the lows being issues that were just okay, but it never hit a total clunker, that I can remember. The relationships between Batgirl and Squire was established in a fast and furious manner, yet felt perfectly natural. Hats off to Mr. Miller for taking Ms. Brown, from I can’t believe she is going to be Batgirl, to I can’t believe they are dumping her as Batgirl. Two years was too short of a time. 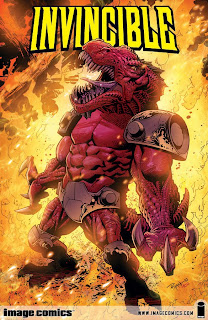 What I Liked – I enjoyed the excuse to get Omni-Man and Mark’s Mom off stage. This allows the focus to remain on Mark. The battle between Invincible and the dinosaur guy was great as we see Las Vegas get blown off the map and we have to wait till next issue for the consequences.

What I Didn’t Like – The portrayal of Atom Eve is insane, they have made her fat and whiny. Kirkman is almost exhibiting a bit of a misogynist feeling about himself with this portrayal. Atom Eve was a great strong character and I feel like the character is being disrespected just so Kirkman can do something no one else has done. It may seem like a small thing but it is starting to turn me against this book. Another minor issue is Kirkman’s reluctance to name the character by having Mark say the villain’s name. On one hand I understand not bowing to convention on another don’t I assume I follow you work so religiously who all the characters are instantly.

Overall – It did a good job of putting the war behind us and allowing the plotline of Mark’s people become part of the Earth’s population to be a background plot. It also moves a lot of the characters forward while still delivering some cool super hero action. 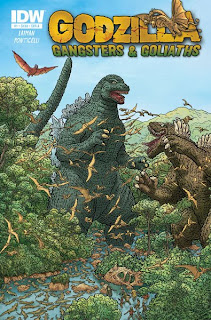 What I Liked – The story, the art, the whole damn book. John Layman gave us a great story and set up the entire series with a deft hand and at the same time gave us a good solid issue that stands on its own. Ponticello’s art was equally well done. His layouts were terrific and he conveyed the size and scope of Godzilla better than almost any artist I have ever seen (as shown). I also thought the note on the inside front cover that this story takes place in a different continuity than Godzilla Kingdom of Monsters was a nice touch. 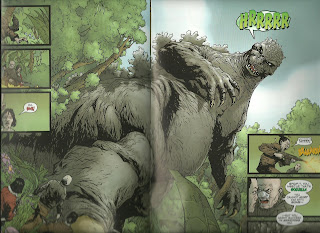 Godzilla is a book that I don’t care about continuity, but it was still nice to acknowledge that for fans who might care to let them know.

What I Didn’t Like – That the cover does not acknowledge this is a mini-series.

Overall – What a surprise as this was the best book of the week in my view. John Layman made the story about a detective going up against some Japanese gangsters and he escapes off a ship to Monster Island. The flashback technique was nothing short of brilliant as the technique was quick, clean, easy and amusing. Add to that the excellent art and a story that had a beginning and middle with the solid set up for part 2 and you have a terrific mini-series. Layman will be a rising star at the big two before the end of this year or early 2012. Although a part of me would rather see more of his work with Chew and Godzilla like projects.

So the week was weak, but not horrible.