Jim was kind enough to send me a couple of books and in an amazing turnaround, I read two last night. 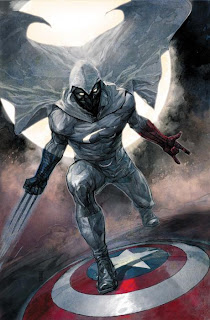 Moon Knight #1
(W) Brian Michael Bendis
(A) Alex Maleev (Color) Matthew Wilson
Briefly : Moon Knight has moved to LA and produces a successful TV show, not unlike Xena, based on his own life experiences. But, the super criminal element has started to infiltrate the city and it’s up to Moon Knight to bring them to justice.
The Good: I haven’t been reading a regular Bendis book for several years now because I found his work on Avengers unreadable. But, with this issue, I remember why I loved him so much. He writes quirky, witty dialogue like no one else on the stands. I know Jim, Greg, and others complain that Bendis only has “one voice” and everyone sounds the same, but for someone like me who hasn’t read his material in some time, and for a single hero, it works really well. As for the story, the premise is quickly set, Moon Knight gets into action quickly and all is good.
The Bad: I don’t know what happened to Maleev’s but the art here is moderate at best. I can’t tell if he didn’t care, mailed it in, his dog died, or something else impacted his art but many of the pages look half finished. The art and the colors seem to be fighting each other for dominance and it’s not pretty to look at.


Also, the page design is pretty questionable. There are 2 or 3 splash pages, and I think one huge double page spread… which are a total waste of paper. And I say that as an art guy! I love big splashes as much as the next guy but one per issue is about right. The big splash doesn’t advance the story. It doesn’t add characterization. In fact, it just reduces the page count for the actual story. Combine that with Bendis’s inability to choreograph a fight scene and some of the action sequences are muddy and difficult to follow.
Finally, the villain of the story is Mr. Hyde, who has gone toe-to-toe with Thor and the Avengers. He’s a major powerhouse of a villain. Asking me to believe Moon Knight can knock him out with a few punches stretches credibility.
The Verdict: Even with it’s flaws, I hope to read the second issue. Bendis hooked me with the concept and the quiet moments. I’m hoping the fight scenes improve but they weren’t so bad that I had to stop reading. As first issues go, it’s ok. 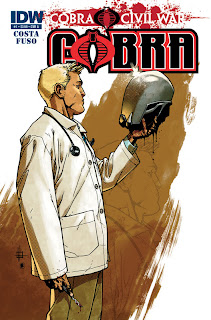 Cobra #1
(W) Mike Costa • (A) Antonio Fuso
Briefly : Cobra Commander is dead and a contest is undertaken by the chief Cobra operatives to see who will be the next Cobra Commander. This issue focuses on the Baroness. A truly lethal femme fatale.
The Good: I haven’t read a Joe comic in over 20 yrs, so I came into this cold. But, Costa makes the story easily accessible. The characters are introduced quickly, the premise is established, and there’s even a little action. The strength of the issue is Costa’s ability to focus on the Baroness. I don’t believe she will be the long term lead in the series but this issue really developed her character. The story moved, subplots, and mysteries were introduced, and overall left me wanting to see what was going to happen next.
Neither good nor bad: Fuso’s art is adequate. He draws in the style of Phil Hester and Andy Kuhn. He has an angular style and likes his blacks. It’s fine but it was never stellar.
The Bad: My only complaint is that the backgrounds were a little empty, which lead to a couple of pages feeling like there was too much white space. But this is a minor quibble.

The Verdict: Another first issue that really hooked me. I am shocked. This was a solid book with just enough mystery to keep me coming back for more. This was good.
Posted by Lee at Friday, June 10, 2011