So I’m still trying to get back into the swing of things. The normal type of rhythm and feel that I have for the blog is still not quite back yet and I think that has impacted my viewpoint on comics and therefore made this week quite a bloodbath in terms of being a best book this week. 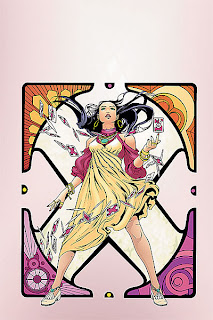 Madame Xanadu#10 – Writer Matt Wagner, Pencils Amy Reeder Hadley, Inks Richard Friend, Colors Guy Major. The first arc of the book concluded and it was essentially an origin story of Madame Xanadu which sets her the reason she ended up where she is in the DCU. What I have enjoyed about this story so much is that this could just have easily have been a DCU book as a Vertigo book, but by being Vertigo it keeps it open to being a little more adult. This issue we see that Madame Xanadu feels responsible for allowing the creation of the Spectre (Jim Corrigan) and that causes her to feel a need to try and helps others when ever they ask for assistance. Now of course that does not jibe with the history of the Spectre in certain DC books over time, but I don’t care as it worked for this story. Amy Reeder Hadley has established herself as a star in my book with this series and I will certainly look forward to her work on the third arc of this book as well as any other books she does in the future. If DC was smart they would be releasing this as a hard cover and a trade at the same time. This was an excellent opening story line and one that lays the foundation for many, many stories both in the future and ones that can be from the past.

Batman Gotham After Midnight #12 (of 12)- Writer Steve Niles, Art Kelly Jones, Colors Michelle Marsden. Steve Niles has crafted a fun maxi-series that not only gave us a slightly different view of Batman, but he has left us with a new cast member of Batman’s rogues’ gallery. It turns out that the woman Batman fell in love with and thought had been killed (April Clarkson) is Midnight. While Batman stopped her scheme and has saved Gotham from her, she is still out there and hopefully free to be used by other Batman writers. Steve used the formula that Loeb used so effectively in Long Halloween and Hush, which is to have almost a new rogue every issue and have a mastermind behind the entire plot. What Niles did so well is to also develop the bad guy to make her an integral part of Batman’s life. Kelly Jones unique take on Batman added to the madness of this story line and his work is either a love or hate it type of style and as long as it is not in the main stream books – I Love it. I would buy a deluxe hardcover version of this series.

Green Lantern #40 – Writer Geoff Johns, Pencils Philip, Inks Jonathan Glapion, Color Nei Ruffino. This was a borderline best of the week pick because while I’m enjoying all that is going on, right now it is too much going on. The book has great art, it is fascinating to see Fatality as a Star Sapphire, I’m enjoying Hal’s struggles with the blue ring, the orange light is a cool concept, and it is just too much. I rarely ever want a story to slow down, but this is one of those occasions where I believe Johns has so many stories to tell he needs a few more issue to get to “Blackest Night”. Still with that as a complaint this is a book that I usually reserve to read until the bottom of my pile so I have a guaranteed good book to end my reading on.

Mr. Stuffins #1(of 3) - Writer Andrew Crosby & Johanna Stokes, Art Alex Medellin Machain, Colors Andres Lozano. This is the same book that came out a long time again from BOOM Studios, but it has been redrawn and tweaked here and there. It is still every bit as charming and fun as it was the first time and to my knowledge maybe one of the few comics that have ever had a pure remake done of it. I have always thought their were some great scripts that deserved better art and a few re-writes here and there and have wished for true remakes to be done of classic comic stories, but we never really see that. The story is about a boy who unwitting ends up with a bear that has an artificial intelligence disc in it and makes the bear think he is a secret agent. There are bad guys after him and the boy himself is dealing with parents who are in the midst of probably getting divorced. It has humor, human interest and it is a fun concept done well.


So a short Best and Worst this week and I could have easily left off Green Lantern and not added Mr. Stuffins since in some ways the first issue is a re-run. I also find that since my vacation I’m re-looking my writing and I’m trying to find ways to improve it. I don’t know exactly where I want to get to, but I will know it when I get there. Another item since my vacation is the lure of books without pictures has been calling me as well as my hard cover collection. The only way to make time for those is reduce the amount of books that I get and with my attitude towards comics lately it maybe relatively easy, but that is how I feel right now and I always wait before taking a paring knife to my list.
Posted by Jim at Tuesday, May 05, 2009