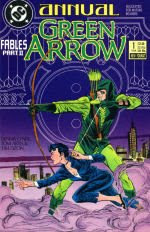 I sold off all my Mike Grell Green Arrow issues but kept the Annuals from 1988 and 1989. Dennis O'Neil would be the reason. I should have kept the Grell issues and sold these, though.

The 1988 Annual is issue 1. Along with O'Neil writing, it had Tom Artis on pencils and Tim Dzon on inks. As an added bonus, Todd Klein did the letters. I'll start with the art this time. It's bad. It's distracting kind of bad. Black Canary, who may be one of the hottest super heroes ever when drawn right, looks drawn and emaciated. She also looks about 55 as a result, and that's just not working. Not that Green Arrow looks any better. More irritating still, characters look strikingly different depending on the angle at which their faces are drawn. But for some hair coloring and costumes, you're hard pressed to know who you're looking at.
Speaking of costumes, our villian, Kalesque, has one of the dopiest outfits ever. He wears quilted puffy pants in a queasy green, what looks like a brownish, sleeveless breast plate, with an overlapping blue portion, and, worst of all, a candy dish on his face. It's sort of like LaForge's vizor on Star Trek: The Next Generation, only it's large in height, as it covers some of the forehead and down past the nose. It seems like it's a plastic or glass because there's often someone's reflection in it. It's the same sort of ugly green as the pants, too.
Aside from the asthetics, it doesn't seem a practical outfit for an archer. Or anyone else, either. The green visor would obscure the archer's vision and the fact that it comes down past the nose would mean it would fog up on the inside. And it looks like a candy dish, so that's really bad. All in all, a totally unthreatening appearing bad guy.
O'Neil is not doing his best work, either. Yeah, it's the middle of a 3 part cross over of annuals for Detective Comics, Green Arrow and the Question. Yeah, it's somehow advancing the journey of Lady Shiva and O Sensei, who are in all three annuals. But, man, does it do nothing for its feature character.
Our deus ex machina is that Kalesque is a spoiled rich kid from England of indeterminate adult age, dependent on his wealthy father who finds him worthless. His only skill is archery, at which he's one of the world's best. Accompanied by his unexplainably Quasimodo appearing butler, he travels to Seattle, where Green Arrow is doing his thing as hero. We're in the era where DC put some of its heroes in real cities and made people bleed a lot more, so no trick arrows, just a lot of arms and legs with arrows in them. For a guy who doesn't want to kill the bad guys, though, Green Arrow's weapons are not designed to help him meet that goal. His arrows are tipped with hunting arrow heads, flaring so they are difficult to remove and causing more damage as they pass through than a narrower tip would.
Kalesque's method of challenging Green Arrow to a contest of skill is to start randomly killing citizens. This is supposed to draw Green Arrow out, along with classified ads, of course. For reasons I don't understand, this sends Green Arrow into a funk. He loses his mojo and can't hit the broad side of a barn door. Hence, the appearance of Lady Shiva and O Sensei to help him get his mojo back, and for them to kill some thugs along the way for good measure.
As the story progresses, Kalesque is not just focused on competition to be the best archer, but outright insane, which is supposedly illustrated when he drools with glee after killing Quasimodo from a great distance. I thought maybe he'd just heard a bell ring and was having a Pavlovian response, but at the end of the story it's said he may get off on an insanity defense, the bane of bad writing for vigillantes everywhere.
In the real world, almost no one gets off on an insanity defense. First, because the standard for sanity in a criminal trial is extremely low. All you have to do is know the difference between right and wrong. Doesn't matter if your view of what's right or wrong is totally out of whack with everyone else, just that you get the concept. Second, you're not really getting off even if it works. You're going to an institution for the criminally insane where you have no set end to your sentence. It's indeterminate. The only criteria is you reaching a point of sanity where you're not a danger to yourself or others. That could well be never. It certainly won't be tomorrow.
But I digress. I think I still have the Question Annual that wrapped this up, but I'm not digging it out at the moment. I'll get to it someday, and we'll see if O'Neil finished strong. I don't think I ever bought the first part in Detective.
So, the next year we had Annual 2. This was a straightforward cross over with the Question 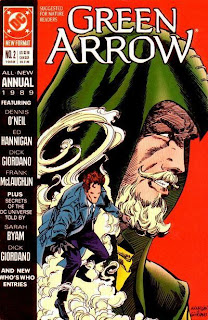 Annual only. The writing and art were both better. O'Neil wrote again and the art was by Ed Hannigan, with inks by Dick Girodano and Frank McLaughun. This time Green Arrow and the Question are in some South American made up country fighting a narco terrorist who is bringing some drug to the US that will turn the populace of Hub City into zombies, unless you're in the minority of the population that it kills. It's an air born drug, oddly enough, so a lot of time is spent deciphering how it will be administered. Suffice it to say that it's figured out in time by Green Arrow and Aristotle Rodor, the Question's advisor, so that Green Arrow saves the day in Hub City, while the Question continues on a typically existential journey in the South American nation.
This one had a lot more of the feel of the ongoing Question series, which is one of my all time favorites. Some of the improvement has to go to the art, especially Giordano's inks, which fit the feel of the series a whole lot better than Annual 1's inks did. Black Canary looks a lot hotter, too. Always a plus.
The only real distraction in this story was that our narco terrorist looked like Zippy the Pinhead. Kind of made me want to laugh when I don't think that's what they were going for. He didn't have the polka dot clown costume, but he had the same head shape and hair cut.
Annual 2 also had a back up story featuring Black Canary that was written by Sarah Byam and pencilled by Giordano. One of those slice of life sort of things. This was in the aftermath of her being held captive by some psycho who cost her her sonic scream. She's now without super power and just fighting with her combat skills. Her mother, the original Black Canary, comes to town and is robbed by some kid. The two of them track down the kid and find he's stealing to support is impoverished family, so Dinah puts him to work and all's well. Except that her mother came to town to tell her she needs to quit the super hero gig now that she's without her super powers. They have a nice little discussion, but she's not quitting, natch.
I should get rid of Annual 1, but why break up a bookend set? I'm sellling some stuff in June, so we'll see.
Posted by Thomm at Sunday, May 17, 2009