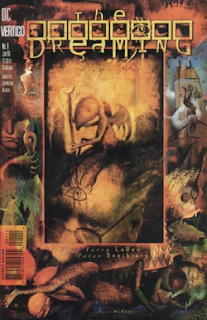 Nineteen ninety-six saw the end of The Sandman. Natrually, like any good corporation, DC couldn't just let that happen. Thus was born, The Dreaming. Various writers and artists wrote stories involving characters from The Sandman, at least initially. All 60 issues of the series run featured covers by the inestimable Dave McKean. With the story arcs being brief in the initial run of things, I'm going to look at two of them today.
First was The Goldie Factor by Terry LaBan and Peter Snejbjerg. This kicked things off in issues 1-3. The story owed a lot to the Gaiman stories that had gone before, using Cain and Able, as well as Eve, as the prime movers of the story. Goldie is a very young gargoyle who is a very rare gold color. Rare for gargoyles, that is. Some time ago she was given to Able by Cain when she was still just a golden egg. Now she's been with Able for awhile and has grown tired of the constant cycle of Cain killing Able, Able being reborn, Cain killing Able... As a result, Goldie runs away. 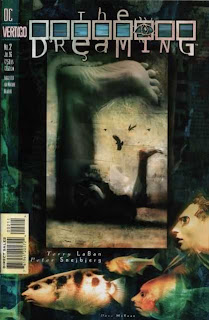 The rest of the story is Cain, Able and Cain's gargoyle, Gregory, trying to find Goldie while Goldie meets up with a limbless man named Tempto. Tempto, of course, is the serpent from the Garden of Eden story. Upon meeting Goldie he realizes she's a very special gargoyle of a breed that was tasked with guarding the remnants of the Garden of Eden. He gets her to take him there, as he cannot get in without her, and uses her to try to change the story of Eve's temptation so that Adam and Eve are never thrown out of the Garden of Eden, nor the serpent cursed. He's stopped by Eve and all resorts to what it was.
There were two particularly interesting elements to this story. One was seeing Able during the time when he is dead, not yet reborn. No stutter. No timidity. No trying to avoid the wrath of Cain. He's the antithesis of his usual self. I'm not really sure why he wouldn't be like that all the time. He knows he's going to be reborn every time Cain kills him, so why the stuttering fear? Although this dead Able depiction is cute in its contrast, it throws in a logical flaw to the character that wasn't necessary to the story. 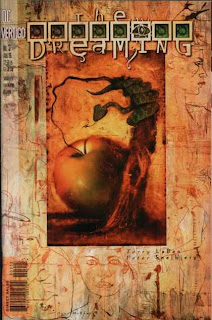 The other was that Eve would rather have the story of her expulsion from the Garden of Eden remain intact than return to the Garden and live out eternity there. Ostensibly it's because she doesn't want to give up all that she lived after that point. The thing is, she remembered all of that when she was in the revised Garden, so she didn't want to have to live there knowing all that she had experienced after being ejected. She's contrasted with Adam, who seems the same simple person that was there before the temptation. Of course, there never were any stories of Adam in the Gaiman Sandman, so he's still the same sort of tabula rasa he would have been pre-expulsion. I found myself rooting for the serpent, though. Eve's rationale seemed considerably more selfish than his. 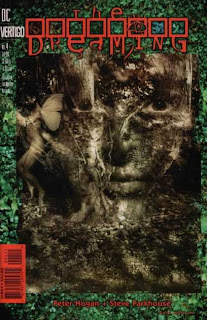 The second story arc was The Lost Boy in issues 4-7, which was brought to us by Peter Hogan and Steve Parkhouse. Only two Sandman regular characters were featured in this story, Lady Johanna Constantine and Mad Hettie. The former was really not even necessary, either. A young man named Brian Salmon is in a loveless engagement and an unsatisfying job in 1956 when he run across some Faeries who give him a vision of his true love. He also runs into Mad Hettie, who asks him to hold onto a key for her, which he does. All would have been well and good with that but for him falling and hitting his head on his way back to his car. Somehow this causes him to jump forward to 1996 when he wakes.
He's quite confused by his time jump and the evident disappearance of everyone and everything he knew in London of 1956. Mad Hettie finds him in 1996 and gets her key back, then takes him to a professor named Muriel, who does some research on his disappearance and helps him get back to a semblance of sanity. Meanwhile Hettie takes the key to Boston to obtain a paper that's locked in a box with some attorneys and has been for over 200 years. She takes the paper to the Jefferson Memorial in DC and meets up with Destiny of the Endless. She's given another paper in exchange for this one. These papers are the basis for the seal of the USA, which somehow 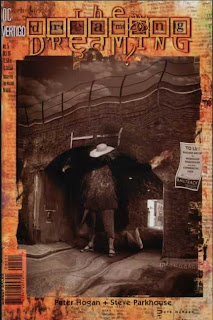 grants the USA longevity as a nation. It also leads to Destiny implying that Mad Hettie will be around another 200 or so years.
Once Mad Hettie returns to England she helps Salmon return to 1956, where he breaks up his engagement, meets up with a 40 years younger Muriel, who, of course, is his true love, and quits his architect job to become a writer.
For a 4 issue story, there was a lot going on and much of it had no bearing on the other parts of the story. The Mad Hettie story involved a piece with Lady Johanna, who seems to have been adamantly opposed to the USA and Jefferson. She wanted the key and the box it opened, and wanted longevity. Lady Johanna and Mad Hettie reached an understanding in 1827 that they would avoid one another's path, and in exchange Mad Hettie somehow gave some longevity to Lady Johanna. I don't really know what this had to do with anything. I don't know what the seal of the USA and Jefferson had to do with anything either.
The Brian and Muriel was nicely done, if a bit predictable. It was also odd for a Sandman based story. More of a happy ending than I was accustomed to see.
Both arcs were nicely done, but nothing that stuck with me over the years. I did recall The Goldie Factor somewhat once I got into reading it again, but The Lost Boy was totally lost from my recollection. I know that later in the series it stopped being an anthology and was under the pen of Caitlyn Kiernan through its finale at issue 60. It was a good deal darker then, with The Corinthian and his pointed teeth eyes taking a lot of the stage. I'll have to take some time to read through these some more, but it's a safe bet I'll be keeping the issues for the Dave McKean covers alone. It's like having 60 little pieces of fine art. I especially like the little changes made to reflect changes in story arcs. The basic art style remained the same, but the presentation changed, if that makes any sense at all.
Even though the series lasted 5 years, I think DC would have been better served in letting some time elapse between the end of The Sandman and the beginning of The Dreaming. The immediate start of The Dreaming only led readers to believe The Dreaming was a continuation of The Sandman, when it was really something different. As a result, there was a lot of disappointment that could have been avoided. A little breathing room would have helped.
Posted by Thomm at Sunday, May 10, 2009