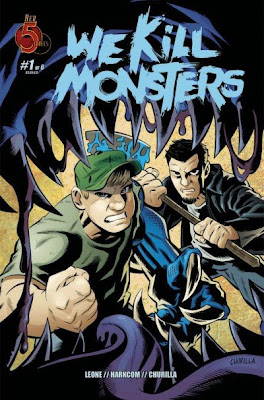 
For anyone that read the Free Comic Book Day issue that Red 5 Comics put out you will have seen a preview for their new book, We Kill Monsters. This review is for the full 1st issue.


My first impression in reading this issue was of the art. I'm not familiar with the artist, Brian Churilla, but I already enjoy his work. He has a borderline cartoonish style that sets the mood for the story. With a less simplistic style it would have been harder to accept the seemingly random encounter the characters have with a monster. The colorist, Ronda Pattison, also helps to set a lighter mood with soothing and familiar color work. It's important for the visual art to establish a setting that works hand in hand with the plot and I was happy to see this book deliver such a team.


The story itself was somewhat silly but fun nonetheless. As stated before the visual art helps set you up for a story that requires a sense of humor and suspension of disbelief. While I have a good ability to suspend my disbelief (I've been reading comics since I was very young) I do feel that in order to usher readers into a new world of possibilities it's a bad idea to do it all at once. This is my only reall complaint with this story. I can believe there are monsters, I can believe that monster blood heals and I can believe that a monster will chase you home after you've killed its friend. However the idea that an arm healed with monster blood turns into a monster arm and gives you new insight into monster kind was a bit much. I feel that it would have been more condusive to build up to one of the characters growing a monster appendage. Of course this is only the first issue - perhaps the monster arm is a build up tactic - perhaps the monster arm will spread until more of the human body goes monster. Only time will tell.


Regardless of this one issue I enjoyed the book overall. The writer(s) manage to give you a feel for the characters rather quickly. During the rapid construction of a totaled truck into a tank-truck I had eighties music running though my head (yay eighties montage!). While I liked the Basher brothers (and, by the way, their store sign is really funny) I think I had more sympathy for the monsters. The way I see it the monster only attacked because its mate needed food (as you find out the second monster they encounter was carrying a bunch of eggs). Then, when the brothers killed the first one its mate wanted revenge. Poor monsters!


Fun visual art and a decent start up plot. This could go either way at this point - either it will turn out to be a fun rollar coaster ride type story or the plot will move two fast to make much sense of. I'm hoping for the former. I'd encourage everyone to give at least the first two issues a try as Red 5 puts out some great comics.