A big gap between Part 1 and Part 2, but we have our regular post to get in and things are busy here at Comics And... central. So I know you have been waiting with bated breath for part 2 and your patience has been rewarded! Don't worry, Lee will be back for more tales of terror from his home life tomorrow. 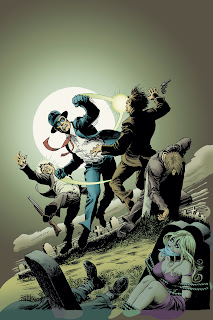 THE SPIRIT #31 Written by Mike Ploog Art by Mike Ploog & Dan Green Cover by Nick Cardy Commissioner Dolan's nephew Danny is in a whole heap of trouble, and it falls to The Spirit to rescue him but to do so, he's got to contend with Danny's amnesia, a priceless stolen artifact, and the latest in The Spirit's run of femmes fatales, the deadly "Adios!" Don't miss Eisner colleague Mike Ploog's return to THE SPIRIT in this two-part story! On sale July 22, 32 pg, FC, $2.99 US

Lee: OOOOHHHH, there’s always something for everyone if you look hard enough. Mike Ploog on art! Excellent. Nick Cardy cover! Double Excellent! And, it’s still on $3. This is well worth it.
Jim: What I want is for Marvel to put together a solid reprint of Werewolf By Night and the first few Ghost Riders as I loved Ploog’s early artwork and still love it today.
Gwen: I'm not actually all that familiar with Ploog's artwork.
Lee: All the proves is that you're 12. All old fart comic lovers like Pops and I know who Ploog is. 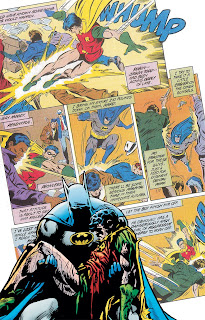 DC COMICS CLASSICS LIBRARY: BATMAN — A DEATH IN THE FAMILY HC Written by Jim Starlin and Marv Wolfman Art by George Pérez, Jim Aparo, Tom Grummett, Mike DeCarlo and Bob McLeod Cover by Jim Aparo The Batman classic of the 1980s is collected in a hardcover featuring stories previously released seperately as BATMAN: A DEATH IN THE FAMILY and BATMAN: A LONELY PLACE OF DYING for the first time in one place! Including BATMAN #426-429 and 440-442 and THE NEW TITANS #60-61!Readers were invited to vote on the outcome of this story — and they decided that Jason Todd should die! In this tragic tale, Jason lived up to his hot-headed reputation, ignoring his mentor's warnings when he attempts to take on The Joker by himself and paying the ultimate price. Driven by anger, with Superman by his side, Batman seeks his vengeance as he looks to end The Joker's threat forever.Advance-solicited; on sale September 23 • 272 pg, FC, $39.99 US

Jim: I wonder how the sales on these books are going as I’m skipping a lot of them. It is only $10 cheaper then an archive, with a lower quality of paper. I know it is a little longer, but I also think it is a glued binding (but I could be wrong).
Lee: Actually, I really really like these collections. The lower price is great and the lesser page quality reminds me more of the original books. I think you have passed because you have most of the material in another hc format already.
Gwen: I haven't actually seen these so no comment. 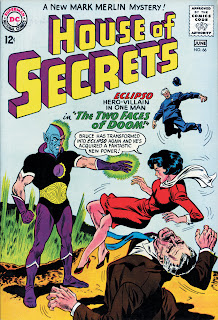 SHOWCASE PRESENTS: ECLIPSO TP Written by Bob Haney Art by Lee Elias, Alex Toth, Jack Sparling and Bernard Baily Cover by Bernard Baily One of the strangest comics villains ever stars in this volume collecting HOUSE OF SECRETS #61-80! On an expedition in the South Pacific, scientist Bruce Gordon’s dark side is unleashed after being exposed to a black diamond. Transformed into the powerful Eclipso, he embarked on an evil rampage as his good side attempted to reassert control.Advance-solicited; on sale August 26 • 296 pg, B&W, $9.99 US

Jim: Bob Haney is renowned for writing some of the craziest silver age material in the DCU. I’m not sure if Eclipso makes that grade, but this stuff was different.
Lee: This is definitely primo silverage wackiness. I like the new, lower price point and might get it just for the art. Hard to not buy anything that has Toth art in it.
Gwen: Wow, Eclipso. Actually I think it would be a lot of fun to read this collection. 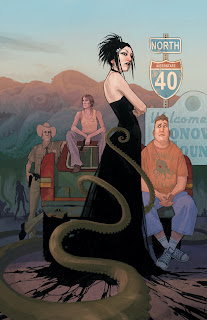 NORTH 40 #1 Written by Aaron Williams Art and cover by Fiona Staples Somewhere in Midwestern America was a place called Conover County. When the old book was opened, and the runes therein used in haste and ignorance, a place of farms, simple folk, and small-town dreams became a den of monsters and nightmare. NORTH 40 is the story of those who survived and came to confront an even greater evil on the horizon – one that wouldn't just consume their flesh, but their souls as well. Heroes arise with power to bring against the dark: Wyatt, an unwilling protector of his former tormentors; Amanda, an apprentice to forgotten arts; and Sheriff Morgan, whose bonds with Conover County go back farther than even he can remember. See where it started, and watch where it's all going in NORTH 40 #1. On sale July 8 • 1 of 6 • 32 pg, FC, $2.99 US

Jim: Under the Wildstorm banner they will do some different stuff and this sounds different enough that I will try out issue #1 to see if it is any good or not.
Lee: It does sound good. I surprised it’s under Wildstorm and not Vertigo.
Gwen: Huh, this looks like it could be really good. It's always nice to see new material. 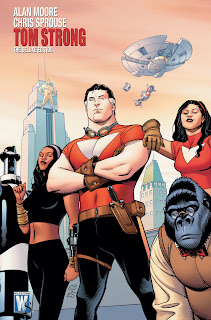 Jim: I recently read this stuff and I really enjoyed, just not sure it is one for the ages, but I have purchased lesser quality material. Ultimately I will probably succumb and buy it.
Lee: This is a really good series. I have the original hc’s DC published so I will pass. And, maybe not for the ages, but still better than 75% of the new material out there.
Gwen: I read the comics, they were fun but I doubt I'd read it again. 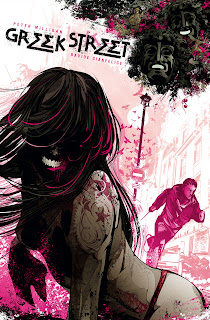 GREEK STREET #1 Written by Peter Milligan Art by Davide Gianfelice Cover by Kako You’re a boy from the hood. You’re brought up rough in a children’s home, trying to stay out of trouble but usually failing. Then at 18 you decide to track down your mother. Within hours of finding her, she’s lying naked and dead at your feet. So you run to Greek Street. And that’s when your troubles really begin… Boasting a cast of sexy strippers, murderous gangsters, body-snatching mad women and a disturbed young girl who can see the future, GREEK STREET is Peter Milligan’s reimagining of those brutal and visceral tragedies that graced the Theater of Dionysus in Ancient Greece – bloody tales about incest, homicide, beautiful oracles, all-knowing choruses, kings, monsters and gods – played out on the mean streets of modern-day Red-Light London. On sale July 1 • 40 pg, FC, $1.00 US • MATURE READERS

Jim: Well how in the heck can you not try out a new series when they are only charging a $1. Peter Milligan (who knows how to write) and David Gianfelice (who I first saw on the first Northlanders arc) is a good artist, so for $1 the hype was overkill.
Lee: I see your point. It’s hard to turn down a good story with “incest, homicide, beautiful oracles, all-knowing choruses, kings, monsters and gods.” I think the only thing they left out was the talking chicken.
Gwen: The $1 charge is a great way to encourage people to try out a new series.
Jim: Well if there is no talking chicken then count me out. 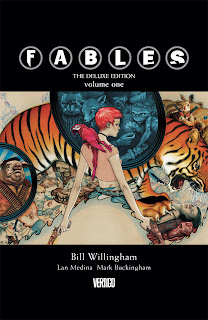 FABLES DELUXE EDITION VOL. ONE HC Written by Bill Willingham Art by Lan Medina, Mark Buckingham, Steve Leialoha and Craig T. Hamilton Cover by James Jean For the first time ever, Bill Willingham's acclaimed, Eisner Award-winning series FABLES is presented in a deluxe hardcover edition collecting issues #1-10. When a savage creature known only as the Adversary conquered the fabled lands of legends and fairy tales, all of the infamous inhabitants of folklore were forced into exile. Disguised among the normal citizens of modern-day New York, these magical characters have created their own peaceful and secret society within an exclusive luxury apartment building called Fabletown. When Snow White's party-girl sister, Rose Red, is apparently murdered, it’s up to Fabletown's sheriff, the reformed and pardoned Big Bad Wolf, to find the killer. Meanwhile, trouble of a different sort brews at the Fables’ upstate farm where non-human inhabitants are preaching revolution – and threatening Fabletown’s carefully nurtured secrecy. 7.0625” x 10.875”, 264 pg, FC, $29.99 US.

Jim: This is what I have been waiting for. I’m happy to sign up for this hard cover series.
Lee: I’ve very happy for this too. Now, if only they can get TransMet and Hellblazer into HC life will be complete.
Gwen: One day I'll be replacing my TPs with this. It can sit next to Sandman and Kingdom Come on my bookshelf. The Legion archives will have their own shelf. 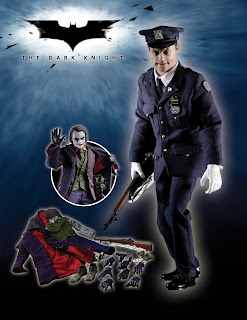 Lee: WTH is this? Seriously, $195 for a Barbie doll that has translucent eyes? This doll is going to be used in the next Chucky movie.
Jim: Okay Lee’s picking of these dolls is getting as bad as my picking the Neon signs. Still the point is well taken - $195 for a Barbie doll is insane. Finally are the grenades live?
Gwen: Poseable eyeballs! 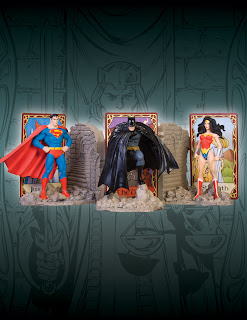 TRINITY BOOKENDSDESIGNED BY MARK BAGLEY • SCULPTED BY DAVE CORTES Display your copies of DC’s hit weekly series TRINITY between this unique three-piece bookend set! Batman, Superman and Wonder Woman form a triad, each with its own base. Superman and Wonder Woman anchor each side while Batman poses in a bonus third, center piece. Designed by superstar artist Mark Bagley, each character is an iconic representation of one of the tarot cards in the story. To further this concept, each of the bookends features a removable tarot card, which can be inserted into a slot in its base to provide a backdrop. Each piece of this limited-edition, cold-cast porcelain bookend set measures approximately 8.25” tall x 6.5” wide x 6” deep, includes a 4-color Certificate of Authenticity and is packaged in a 4-color box. Manufactured to order.Advance-solicited; on sale December 2, 2009 * Bookends * $325 US

Jim: Two problems with this. Book ends should be two items not three. $325 to remind me of a series that bored the crap out of me, pass.
Lee: Sigh, I miss neon signs.
Gwen: Bookends - In this case a good idea with a poor subject and poor execution.

Jim: So Blackest Night now becomes the series DC is pinning there hopes on, but they have wisely decided to do add on mini-series that do not impact the ongoing series of their books and I think that makes sense. What DC does not have is a book like the New and Dark Avengers series which are the current spine of the MU.
Lee: As always, some good, some bad. But if you’re not interested in Blackest Night, mostly blah.
Gwen: I can't believe there are action figures with poseable eyeballs, it's hilarious!
Posted by Jim at Wednesday, May 20, 2009