BM
Brownsville GN by (W) Neil Kleid (A) Jake Allen
'Jewish gangster' isn't a term you hear much, but back when the Dodgers played in Brooklyn and licorice cost a penny a bag, street corners were lousy with young, Semitic toughs looking for adventure and excitement - none more so than in Brownsville. Follow the intertwined lives of Allie Tanennbaum, Abe Reles, and scores of hoods organized by Louis Lepke Buchalter into the deadliest hit operation in Mafia history, 'Murder, Inc.,' as they escape the mean streets and lonely tenements of East New York. $12.95 A very, very old CBR interview with lots of preview pages here
Lee: Yeah, yeah, yeah I know this is really, really old but I wasn’t working this column back when this was released. So, I shall mention it now. NBM is a quality publisher with an excellent track record of printing great books. This looks to be a really good crime story so I’m going to give it a chance.
Jim: I was going to go off on a smart aleck rant about how Lee picks stuff, but let's face it this book does look good. I love crime stories and books with a solid historical perspective, looks like Lee is costing me more money.

Outlaw Entertainment
Hat Trick GN by (W) Jason M. Burns (A) Armando M. Zanker
Ray, a would-be magician, discovers a world of magic through his famous uncle's top hat. With the help of a few of the world's inhabitants, including a six-foot-tall talking rabbit named Poof, Ray must uncover his true potential and defeat the evil that is enslaving the world! $14.95 Zanker’s comicspace with art samples here
Lee: Sometimes I don’t know why I pick books. In this case, the hype is ok. The interior art is ok. There’s nothing spectacular about this listing but something about this screams “interesting.” I like to support the little guy so I might have to give this a try.
Jim: It has a certain charm to it that the cover conveys. Plus I think the idea of magic being real is always a wish fulfilment type fantasy. 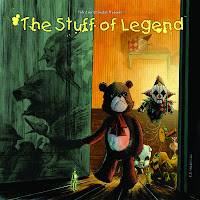 Th3rd World Studios
Stuff of Legend #1 by (W) Mike Raicht, Brian Smith (A) Charles Paul Wilson III
The year is 1944. While Allied soldiers storm a beach in far-off Normandy, in a child's bedroom in Brooklyn, a small group of toys loyal to their human master fight an unseen war to save him from every child's worst nightmare - The Boogeyman. Discover the series that Frank Quitely (All-Star Superman) says is 'a real page-turner. Economical, effective storytelling, with both story and art complimenting each other perfectly, and hinting at something darker.'. #1 of 2 $4.99
Lee: We reviewed the preview copy of this for free comic book day and it was well received. You can find opinions here, here and here. It’s worth adding to your pull list.
Jim: IF YOU PASS ON THIS BOOK YOU ARE MAKING A MISTAKE. EVEN IF YOU DON'T LIKE SOMEONE YOU KNOW WOULD LOVE IT AS GIFT. BUY THIS BOOK. 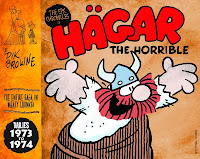 Titan Publishing
Epic Chronicles of Hagar the Horrible 1973-74 HC by (W/A) Dik Browne
In a world filled with dragons, wizards, sea monsters, Norse gods and titanic battles strides the world's mildest marauder, Hagar The Horrible! Following the noble traditions of Beowulf and umm.. that movie The Vikings starring Kirk Douglas and Tony Curtis comes the epic saga of the best-known and most-loved Viking in the history of the world, the loveable, Hagar the Horrible - and his unending quest to put mead, swag, and meat on the family table! This mighty tome collects the first two years worth of Dik Browne's Reuben Award-winning comic strip that helped to forge the legend of Hagar the Horrible, and make him one of the world's most popular cartoon characters of all time! $19.95
Lee: I’m sure you already rolled your eyes but to be fair, the early Hagar the Horrible is very good comics. You probably don’t need more than this book in your collection but it’s worth having there. What I find odd is that Titan Publishing, a British company, is issuing this. Does anyone else find that odd?
Jim: I find many things odd, but I'm not getting personal in this column. Dik Browne is a great cartoonist and this strip was always fun. It was not the best strip ever, but it is good pure fun and entertainment that is worth your time and money.

Lenore Noogies HC (PX Color ed.) by (W/A) Roman Dirge
Lenore: Noogies collects the original Lenore comics in color for the first time, comics that went into multiple printings with over a million sold so far! Lenore might only be small, but her talent for mischief - and occasional wanton destruction - is anything but! Featuring stories about limbless cannibals, clock monsters, cursed vampire dolls, taxidermied friends, an obsessed would-be lover, and more fuzzy animal mutilations than should be legal, never has the term 'something for everyone' seemed more sinister and bizarre! This fantastic exclusive hardcover will feature a superb new inset cover and exclusive extra material including a signature page from Roman Dirge and four frameable color art cards shrinkwrapped with the book! $24.95
Lee: I never read Lenore until Jim sent me an old reader copy. Surprisingly enough I really, really liked it. Unfortunately the trades are out of print. But luckily this far more expensive hc is being released. Luckily I love hc’s so I’ll be getting this. One of the best goth girl strips out there, it’s worth a read.
Jim: Actually it wasn't a book I read that I sent to Lee, I beleive it was left over from when I had my store back in the mid 90's. I'm pretty sure Gwen and Jamie liked this book also.

Tool Publications
Colodin Project GN by (W/A) Ken Krekeler
Steven Richards is telling the FBI a story. It is not a happy story, and it doesn't end well. Richards is a private investigator. Six weeks ago, he was hired to solve a murder. Today, he's the cause of widespread panic which threatens now to eat the world. He's telling the FBI that there's a place where all the gifted people go. Special, secret people with impossible powers and abilities. These people look like They sound like But they are not like They are part of the Project. $14.99 The official site with lots of previews here
Lee: This looks really, really cool. I like the old secret organization and superpowers premise. Krekeler’s art has a certain appeal to it. I recommend looking at the previews but I think I’m sold on this one.
Jim: It has a great sounding premise, but when I'm trying something in this corner of the market I tend to stay away from what sounds like another take on super heroes.

Top Shelf Productions
Surrogates HC (special ed.) by (W) Robert Venditti (A) Brett Weldele
This special edition collects the original Surrogates graphic novel as well as the new prequel, The Surrogates: Flesh And Bone, into a super-deluxe single hardcover volume. Designed to look like an owner's manual, this edition contains everything you need to know about your new surrogate purchase! $75.00
Lee: YOW!!! $75 for a hc???? It was good but I’m quite happy with my tpb.
Jim: The old "it is being made into a movie, so let's gouge somebody" deal. Regardless the story is a good read, but the trade is just fine.

Surrogates Vol. 02: Flesh & Bone SC by (W) Robert Venditti (A) Brett Weldele
In a dark downtown alley in Central Georgia Metropolis, a juvenile prank goes too far and a homeless man is killed. When the ensuing investigation reveals that the attackers aren't who they appeared to be, justice depends on the testimony of a single witness, a street snitch with a history of providing information to a uniformed cop named Harvey Greer. Harvey is placed on special assignment to track down the informant, but others have their own designs, including a wealthy socialite and an ex-con turned religious leader known to his followers as The Prophet. As days pass and anger among the anti-surrogate population grows, the city stands on a razor's edge. Will punishment be exacted in a courtroom or on the streets? This sci-fi/noir police thriller is a prequel that sheds new light on the characters and events of The Surrogates, soon to be a major motion picture from Touchstone Pictures starring Bruce Willis. $14.95
Lee: I’ll get this but honestly, I have low expectations. The original was good because of it’s unique view. But, this smells of movie execs forcing a writer to shoe horn in new material. I hope that’s not the case which is why I’ll give it a try.
Jim: I 100% with Lee on this. It has a stench of a forced prequel. Still maybe the writers had this idea before, but it was not profitable to trot it out until now. Sign me up on this one also. 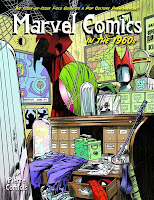 Twomorrows Publishing
Marvel Comics in the 1960S SC by (W) Pierre Comtois
After being relegated to the realm of children's literature for the first 25 years of its history, the comic book industry experienced an unexpected flowering in the early 1960s. This book presents a step-by-step look at how the company emerged as one of the most dynamic, slightly irreverent, and downright original contributions to an era when pop-culture emerged as the dominant force in the artistic life of America. Marvel Comics in the 1960s takes the reader from the legendary company's beginnings as helmed by savvy editor/writer Stan Lee, to the full maturity of its wild, colorful, offbeat grandiosity. $27.95
Lee: I am all over this! This combines two of my favorite things: reading about comics history and Marvel comics. Marvel in the 60’s revolutionized comics so I’m very, very interested to read this.
Jim: Lee has slowly gotten me back into reading more about comic history and I recently read a good retrospective on Tower Comics and Thunder Agents. I maybe buying this book also.

Lee: Well it was another good month. I can see Diamond policy is starting to remove some of the fluff. That's good because I can see material I missed better. But, it's also taking some of the better foreign material that Cinebook published. Still plenty to read though.
Jim: I agree it did remove some stuff that maybe was cluttering up the field for some good stuff, but I still rather have the choices then not. All in all an interesting month with STUFF OF LEGEND being my number one pick.
Posted by Lee at Friday, May 29, 2009