Lee: It’s Indie time! My favorite part of the blog. Also the most expensive to my wallet.
Jim: Now I know it sounds like a broken record (some of you remember records I'm sure) but if you can't find something from small press publishers then you are not looking hard enough.

AC Comics
Femforce Omnibus SC by (W/A) Various
Celebrate the 25th Anniversary of Femforce with this first volume in a new collection reprinting AC Comics' long-running 'good girl' super-team comic! This volume contains the ultra-rare Femforce issues #1-9, going back to 1985 with stories of the Femforce versus Ripjaw, the Gammazons from Galaxy G, Stella Stargaze, the Kronons, Dr. Rivits, and Montague Moon! $29.95
Lee: The original good girl comic gets the Omnibus treatment. Every generation has it’s pointless girlie comic books. In the 50’s it was Sheena. In the 90’s it was Danger Girl. In the 80’s it was Femforce. Not exactly classic but it will certainly bring back the memories.
Jim: I have to laugh because I keep thinking that if you wait long enough every book will be reprinted one day. I'm glad I have been cutting my weekly list a bit so I can have time to read some of my collections.

Amaze Ink/Slave Labor Graphics
Zeke Deadwood, Zombie Lawman Vol. 01: Legally Dead GN by (W/A) Thomas Boatwright, Ryan Rubio
Whenever innocent blood is spilled upon the sand of the Old West, a foul wind blows in across the frontier! Fear not! For that fould stench belongs to Zeke Deadwood: Zombie Lawman! Created, drawn, and co-written by award-nominated artist Thomas Boatwright with Ryan Rubio (creators of Cemetery Blues) comes a classic western tale of Saturday matinee action with a healthy dose of B-movie horror. A lone zombie is out to clean up a small western town from a villianous band of outlaws. Can Zeke stop their drunken rampage of terror? Will the townsfolk even let themselves be saved by the undead? $3.95 Some preview pages here
Lee: Boatwright and Rubio did the Image series Cemetery Blues which Jim and I both enjoyed. Jim read the single issues, I read the trade, and we both came to the same conclusion that it was good stuff. Now the pair is back again with zombie-horror silliness. I’m in!
Jim: A very easy buy. First off Boatwright has a great quality to his work. It is infused with a cartoon type style and is also realistic (which I know makes no sense, but it is true nevertheless). Second the story was great in Cemetery Blues and I like forward to more solid and entertaining stories here.

Cartoon Books
Rasl Collectors ed. HC by (W/A) Jeff Smith
Jeff Smith's science-fiction series, RASL, is collected in this oversized hardcover edition! Featuring 112 pages of story art and 16 new pages that include concept sketches, script pages. and bonus artwork, each book also comes with a stylish ribbon bookmark. Each copy signed by RASL cartoonist Jeff Smith, the RASL: The Drift hardcover will be numbered and limited to 3,000 books. $50.00
Lee: $50 for 112 hc is steep. But, it is signed and limited so it might be worth it. I’ve read positive reviews but I’d basically be buying this for a signature. That’s a tough sell.
Jim: The is very steep and although I have heard positive reviews I have yet to read Rasl. 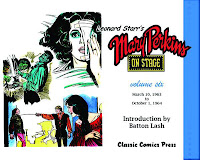 Classic Comics Press Inc
Leonard Starr's Mary Perkins on Stage Vol. 06 SC by (W/A) Leonard Starr
The latest volume of the Eisner-nominated Leonard Starr's Mary Perkins On Stage reprints dailies and Sundays from March 10, 1963 to October 1, 1964, with an introduction by Supernatural Law creator and The Simpsons and Archie Comics' writer Batton Lash. $24.95
Lee: I just mention this because there is lots and lots of good material out available that isn’t superheroes. Mark Perkins was a premier strip back when newspapers were more relevant. If you’re looking for classic art and story then this is a good read.
Jim: I'm unfamiliar with this strip, but I bow to Lee's superior knowledge base in this one limited area. 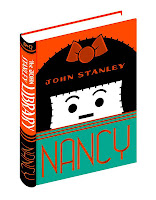 Drawn & Quarterly
John Stanley Library: Nancy Vol. 01 HC by (W/A) John Stanley
The iconic comic strip character as you've never seen her before, interpreted by John Stanley. Created by Ernie Bushmiller, the beloved Brillo-headed Nancy starred in her own comic book series in the 1950's, written by arguably the greatest children's comics writer of all time, John Stanley. Drawn & Quarterly is now presenting the complete Stanley issues of Nancy in gorgeous hardcover volumes designed by Seth. $24.95 Lee: It’s amazing the Lulu, a superior character, has lots of trades yet no hardcovers. Nancy, on the other hand is getting this fancy hardcover. I’m getting it because I love the material. This is for the lovers of old, classic comics.
Jim: I absolutely hated this stuff and it never appealed to me. Is this where the term "Nancy Boy" comes from?(guys who liked this comic). I'm always amazed how radically different Lee's and my taste is with some stuff and then with other material we are book agog over it.

Fanfare / Ponent Mon
PM23: Years of the Elephant GN by (W/A) Willy Linthout
It had been a normal morning in the Germonprez household. Carl reading the newspaper, Simone tackling some morning chores, and their son, Jack - 'Your son has jumped off the roof!' Carl, in an emotional haze, heads off to work only to discover, on the sidewalk outside their home, a chalk outline where there had been a son. No parent should have to bury a child, especially through suicide. Linthout draws an almost tangible pain with his immediate, rudimentary art and strong script which comes from personal experience. Winner of the Belgian Cultural Prize. $20.00 More about Linthout here
Lee: Yep, this looks like it will be an amazingly depressing book. Having one of you children die has got to be a crushing experience, but having the child kill him/herself has got to be even worse. To be able to write about the subject must have taken incredible strength. Depressing, I’m sure it will be. Moving, I’m pretty positive it will be too. I’m sold.
Jim: As a parent (as Lee and I both are) this would have to be the absolute worse thing that could happen to you in your life. It goes against nature to have to bury a child and this way is that pain squared. I'm not sure I could deal with that event, but I understand the need to write about it and I'm curious to see how Willy Linthout made it.

Fantagraphics Books
Skin Deep GN by (w/A) Charles Burns
Charles Burns is the creator of the landmark horror graphic novel Black Hole, currently in production as a major motion picture directed by David Fincher. Skin Deep is the third (following El Borbah and Big Baby) of a series of three volumes collecting his acclaimed oeuvre up to Black Hole. Skin Deep includes Burns' popular character Dog Boy (a red-blooded all-American boy with the transplanted heart of a dog) and the classic strip 'Dog Days,' in which a hash-slinging vixen wags her tail at our fearful hero. The book also collects 'Burn Again,' which features a strange fella named Bliss Blister, claiming to bring the Word of God, but some fear he brings something evil and profane. In 'A Marriage Made in Hell,' a young wife's flesh tingled with passion, but the sight of her made her husband's skin crawl. Was the love-knot she tied really a hangman's noose? These tales of doomed romance set a tone for the rest of Skin Deep. In addition to the comics, Skin Deep includes several pages of illustrations reprinted from Burns' sketchbooks as well as covers and other pieces from foreign editions of the author's work. $16.99
Lee: It is great twisted fun. I already have this but I want to recommend it to everyone who’s hasn’t experienced Burns yet. It’s got great art and some really twisted stories. And, it’s cheap. Highly recommended.
Jim: Really, I read the solicitation and look at the art and I'm not sure I see the appeal. I would have to read one or tow stories before I would be sold.

That's it for Part 1 - Stay Tuned for More Indy Madness Next Week!