In April '96, Death came back for another three issues series, The Time of Your Life. Neil Gaiman was again at the helm writing, but pencils split between Chris Bachalo and Mark Buckingham, the latter of who also did inks, as did Mark Pennington. In fact, from the look of things, Bachalo started out on pencils and made it through the first issue and a half, then Buckingham left the inks and went to pencils for the remaining issue and a half, with Pennington finishing off with the inks for that last issue and a half. Changes in visual art personnel notwithstanding, it came out seamlessly. And let's not forget Dave McKean's covers. Excellent, as always 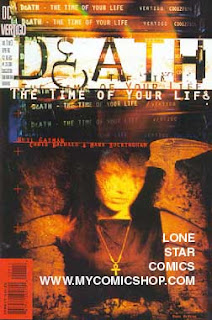 .
Death was more a passive character this time around. Still our favorite goth chick by all appearances, but the characters in motion for this story were Foxglove and Hazel, a lesbian couple who'd appeared previously in Sandman. In fact, I think it was the first story arc. They weren't a couple then, but have since become one and have a toddler age son, Alvie.
I like this story. Better than The High Cost of Living, I'd say. Death is involved because Alvie dies. No explanation how. SIDS or something, I suppose. Foxglove, whose real name is Donna, is a rising music star on the road to promote her album. Hazel makes a deal with Death. Death is overly fond of this family. I'm not sure why. Death says she loves everyone, so I can't quite wrap my head around why she should love this family any more tha anyone else. Still, she says she does, and that'll have to do.
The deal is that Hazel and Foxglove get a little more time with Alvie. How long isn't said. At some point, though, Death will return and one of the three will have to die. Nine months later and its time for Death to return. 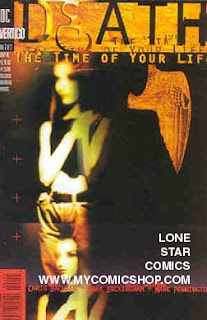 The intersting thing about the story isn't the Faustian Bargain around which it revolves. What's interesting is the sort of everyman quality of the lives of central characters. Aside from Foxglove, Hazel and Alvie, we also have Foxglove's manager, Larry, her bodyguard/daily support, Boris, and an underwear model named Vito. Foxglove and the three men are in New York for her appearance on Letterman and at a movie premerie that features one of her songs. The underwear model, a one time med student, is a beard. Nonetheless, he's as fleshed out as any of the other six main characters.
Much of the story is about how strained Foxglove and Hazel's relationship has become. Foxglove is having affairs while on tour. Hazel, who's unaware of the affairs, is resentful of both having to share Foxglove with the rest of the world and of being hidden away as Foxglove's personal secretary rather than partner/spouse. There's even an intersting tangential discussion of the merits of Foxglove coming out of the closet, and how that appears in comparison to k.d. lang or Melissa Ethridge. In fact, in general there's a lot of talking, whether it's an internal monologue or between the characters, which isn't unusual in a Gaiman work. It works really well here.
We learn about the relationship between Foxglove and Hazel through Foxglove's writings and songs and through Hazel's conversation with Death. They're talking about the same relationship but from very different perspectives. Both are unhappy in one way or another. 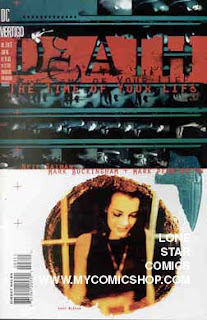 In the end, Foxglove, Larry, Boris and Vito follow Hazel and Alvie to the shadow lands between life and death to meet with Death and discuss the deal. Only Hazel knew anything about Alvie dying and the deal that was struck. Larry's already dead by this point, so he can't offer up to stay in Alvie's place, but death allows Boris and Vito to jump into the discussion as possible sacrifices for Alvie. Foxglove comes to realize she still loves Hazel, and Hazel's certainty of her place in Foxglove's life is reassured by Foxglove following Hazel to this point.
This story is less beholden to the Sandman mythos than The High Cost of Living. It's an emodiment of death story that could have been told entirely without reference to any of the Sandman or Death stories that had been told previously.
All right, I'll admit it. If it were a movie, it'd be a chick flick. But, like When Harry Met Sally, it's a really good chick flick. Once again proving the point that high quality work can be created in any genre, no matter how sappy the underpinnings of that genre. So, go out an buy it. As you can see in the pictures, it's available at Lone Star Comics, among other places.
I don't know if anyone has asked, but reading this you might think Gaiman had it in for his fellow Englishmen. The only two English characters in the story both died.
Posted by Thomm at Sunday, May 03, 2009