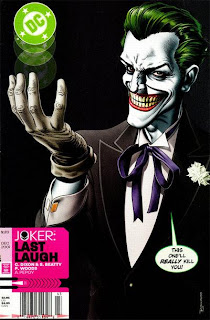 It's Friday night, and it's been a major hassle getting here. No fault of the site or anything, just a quirky computer that's probably full of spyware and crap. Capricious would be a good word for it. Appropriate, I suppose, as this post, which will go up Sunday, is about Joker: The Last Laugh. Yes, another in the never ending panoply of mega crossover events. I've skipped most of these over the years, and it's things like this, not to mention Final Crisis, that remind me why.
Pointless. Errant. Illogical. Ineffectual. These are all apt descriptions of this six issue series from 2001-2002. Chuck Dixon and Scott Beatty wrote the thing and a rotating cast of artists drew it. From an esthetic point, that was probably not a great idea. The artists had varying styles that didn't mesh well and often didn't fit with the characters portrayed. For instance, Pete Woods drew the first issue with a very cartoon style. This can sometimes work with Joker stories, but this was a dark Joker story, not some light weight fare from the '60s. Worse, though, the characters don't much look like who they're supposed to be, especially when not in costume. It's hard to put my finger on it, but they're almost generic. 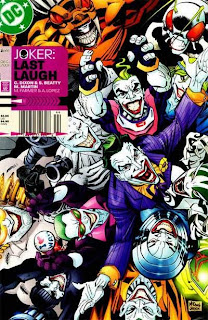 So that's the art.
The writing's worse. From the start it makes no sense at all. Our motivating force here is that Joker has been told he has a tumor that's going to kill him. He's in a prison called The Slab, short for Slabside Penetentiary. Obviously in the real world there would be a slim chance that a psychotic like the Joker would be put in a prison rather than a maximum security mental institution. In comic book world I can leave that aside. No, the first big problem with the story is that Joker has figured out that a nausea inducing gas the prison uses to subdue prisoners, mixed with another gas the prison uses to nullify meta-genes, creates a form of Joker gas. Not the deadly kind. Just the kind that makes all the cons look like Joker and follow his lead.
A prison, even in comics world, isn't going to test the results of mixing different gases it uses to 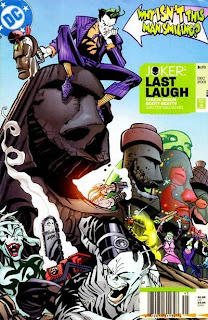 subdue its population? Sure. Real likely. And even if they didn't what the hell are the odds that these two gases, that could have been just about anything the prison would have contracted for from some outside vendor, 'cause it's not like prisons make this stuff themselves, are going to combine to create a Joker gas. And right when he finds out he has a terminal tumor. It's just too stupid for a willing suspension of disbelief.
Post break out of The Slab with all his crew, it's Joker's plan to gas some people, naturally, but mostly he's out to destroy the world, since he's going down. Oh, and in the course of the break out The Slab, which is on an island, gets moved into some black hole dimension.
For all this world wide destruction, we see almost no major DCU players in this story. Batman shows up momentarily here and there. The JLA makes some nearly cameo appearances, too. Mostly our lead heroes are Nightwing and Oracle, plus a guy who works at the prison named 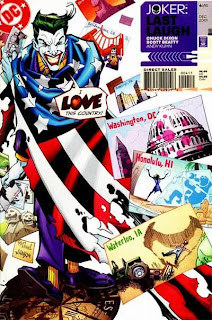 Shiloh and some sort of uber cop named Dina. These latter two are stuck on The Slab in its other dimensional location and work through much death and comedy to return to the world.
The quality of villians isn't much better. Our main non-Joker players are President Luthor, Multi-man and Mr Mind. Multi-man and Mr Mind are on The Slab, too, and really spend the series helping Shiloh and Dina return the island to the world, so they're not even functioning as villians. Back on the world, we have a lot of lesser lights, which is particularly problematic with all of them having the Joker pasty face, green hair and maniacal grin. It makes them largely indistinguishable, as does all of them doing Joker's bidding and not really having anything to do with their own normal characters.
The Oracle and Nightwing story is the main line in the good guy side of things, starting with them out on a date so that she's away from her monitors. This means that when Joker begins the prison riot that leads to him turning the other cons into Joker disciples and breaking out she can blame herself and engage in quite a lot of self pity. It's fairly predictable. What doesn't make any sense at all, though, is that through much of the story she wants Joker dead. Partly because she's reached the conclusion that he'll always get free and kill more people and partly for 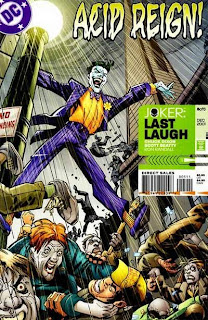 revenge because he crippled her, she's decided killing him is the only solution. That's all well and good, but in the later stages of the story Nightwing wants to kill Joker because he thinks Robin has been killed by Killer Croc as a result of Joker's activities. That's fine too, but now Oracle, with no reason or explanation, doesn't want Joker dead, or at least not at Nightwing's hands. I have no idea why she's made this switch from her previous position. It never says. Maybe it was in one of the tangential stories told in various ongoing titles, but being such a major change in the character, it would be nice to see some explanation in the actual main story.
Nightwing does fight Joker and nearly kills him, but in the end does not. Robin isn't dead, either. Someone else's skeleton and a piece of his uniform floating in the sewers together. It was only to be expected that the second greatest detective on the planet would automatically assume that Robin was dead without any further information. Yeah, I didn't believe it either.
So where do we end up at the end? What were the great and lasting consequences of this story? 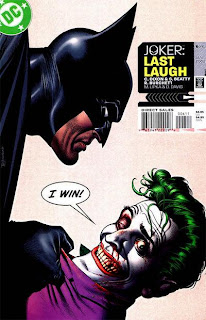 Some minor unknown villians were killed off. The Slab, when it returned to the world, ended up in Antarctica instead of wherever it was closer to the US previously. And that's just about it. See, it turns out that the doctor who told Joker he had a terminal brain tumor was jerking Joker's chain because of all the grief Joker had given the doctor over the years. There was no tumor. The doc doctored the x-rays. Joker's still alive and back in prison, as are the rest of the escapees who survived. The various heroes are entirely unchanged, though Black Canary took quite a beating at one point.
The only good things about this series were the covers for issues 1 and 6, which were done by Brian Bolland. In all these pages only those two covers captured the Joker. I'd have been better off just buying the cover art for those two issues. Live and learn.
To be fair, DC lived and learned, too. 52 is a much superior use of minor characters to tell a major story. That one I skipped the singles and bought the trades, partly because of the lesson I learned with this series. In fact, I may not have bought another cross over series until Infinite Crisis, which had me interested because of Crisis on Infinite Earths all those years before. Of course, Final Crisis has killed it again, and I never had any interest in Countdown. Blackest Night looks interesting, but I think I'll wait for the trades on that, too. What's our lesson today? Odds are that you're better off skipping the mega crossover event. But you already knew that, didn't you?
Posted by Thomm at Sunday, May 24, 2009