We started breaking up the Marvel review into a two parts and are now breaking DC into a two part post. It helps to make the post size a little more manageable and hopefully keeps people reading before zoning out.

Jim: Wow over half of 2009 is gone by already, time flies when you get old. I have been happy to see DC really put forth some effort in a lot of titles lately, but let’s face it John’s is more important to the DCU then any other writer right now and if he asked DC to fire Didio I think they would. I say this as Blackest Night begins this month and it is critical that this series succeed for DC as they need a big hit and Final Crisis was a clear miss.
Lee: Honestly, I care less and less about the big two as the months go on. It’s obvious that the mega-event trend is never going away which makes the DCU impenetrable. It doesn’t mean I won’t read the previews and make fun of the hype but I’m just not as excited about it these days.
Gwen: I'm tired of megaevents. Still the idea behind Blackest Night is interesting enough that I'll give it a chance. 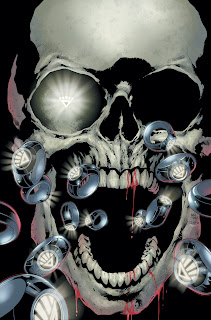 BLACKEST NIGHT #1 Written by Geoff Johns Art and cover by Ivan Reis & Oclair Albert Geoff Johns and Ivan Reis raise the dead in the most anticipated comics story of the year! Throughout the decades, death has plagued the DC Universe and taken the lives of heroes and villains alike. But to what end? As the War of Light rages on, the prophecy of the Blackest Night descends upon us, with Hal Jordan and the Green Lantern Corps at the center of it all. Don’t miss this 8-issue epic taking the DCU beyond the grave!On sale July 15 • 1 of 8 • 48 pg, FC, $3.99 US
Jim: A few pluses to get started right out of the box, 48 pages for 4 dollars is a good thing and Ivan Reis has supposedly had a solid head start so that we should not see many delays with this book. Add to that Doug Mahnke is the Green Lantern artist and there should be no problems with that book as Mahnke is very fast and reliable. I wish that this series was not eight issues long, but DC is following the Marvel pattern and when the book impacts Superman and others it will be via an add-on mini-series so the regular series remain unaffected in the short term.
Lee: I’m gonna wait on this one. Yeah yeah yeah, there’s lots of hype but Morrison’s Final Infinite Disaster Crisis proved that I don’t understand comics. I’ll wait for a body count (John’s MO) and early reviews before committing.
Gwen: I'm intrigued by this as Johns has done some cool stuff with the Green Lanterns up to this point. Even if I still think Kyle should be Ion. 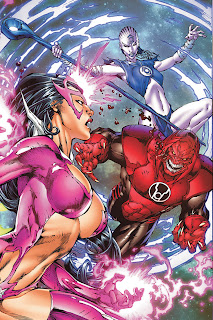 BLACKEST NIGHT: TALES OF THE CORPS #1-3 Written by Geoff Johns & Peter J. Tomasi Art by Rags Morales, Chris Sprouse, Ivan Reis, Doug Mahnke and others Covers by Ed Benes & Rob Hunter In this 3-issue miniseries, writers Geoff Johns and Peter J. Tomasi (GREEN LANTERN CORPS) reveal the secrets behind the Lanterns of BLACKEST NIGHT! Bear witness to Blue Lantern Saint Walker’s pilgrimage of hope, Star Sapphire Carol Ferris’ sacrifice for love, Green Lantern Kilowog’s courageous beginnings, Red Lantern Vice’s source of rage, Orange Lantern Blume’s bizarre creation, and the first appearance of the mysterious Indigo, leader of the Indigo Tribe! Issue #1 on sale July 15; Issue #2 on sale July 22; Issue #3 on sale July 29 • 1-3 of 3 • 40 pg, FC, $3.99 US
Jim: Another good move is to give us a lot of background stories on the first month. I like this idea as it really should give the series momentum. Often these events start off with the first issue and it takes some time to gain the momentum.
Lee: Last month I blasted Marvel for saturating the shelves with DKR material. I see DC has stolen yet another Marvel idea. I’m sorry but if it takes three supplemental mini-series, and all sorts of additional titles to tell the story then I shall have to pass. I’ll probably even pass on the trades because I can’t afford the six tpb’s it’ll take to get the entire story.
Gwen: This could be cool. I like the idea of getting the back story on these characters and I don't mind having them in a separate series. 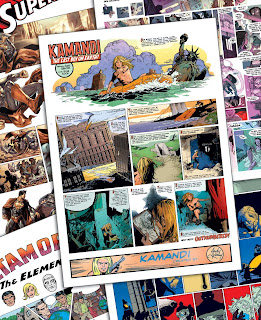 Jim: I love this idea and can’t wait to start getting this series. I also fear that while it is a wonderful idea that as a direct market product it maybe a dismal failure, as too often the direct market just rains on any new idea (retro) idea. If DC can get this out to newsstands it may have a chance for big success. Heck I will be buying an extra copy to give my Dad who will be 90 this year as I know he will love it.
Lee: I agree that this is a good idea that won’t survive in the direct market. Hopefully, it will make it out to some other venue. I wonder how they are going to collect this into a trade?
Gwen: This looks awesome. I always enjoy it when something new like this comes out. 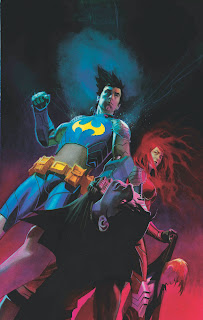 ACTION COMICS #879 Written by Greg Rucka; co-feature written by James Robinson & Rucka Art by Fernando Dagnino & Raúl Fernandez; co-feature art by Cafu Cover by Andrew Robinson So far, Nightwing and Flamebird’s mission of apprehending Zod’s sleeper agents has gone fairly smoothly. But then they met Az-Rel and Nadira Va-Dim. Now the “Bonnie and Clyde of Krypton” have turned the tables on Earth’s newest protectors. The race to prevent war with New Krypton may be over before it’s even begun! And it’s all in preparation for next month’s crossover event in the SUPERMAN books!Plus: The debut of the Captain Atom co-feature written by Greg Rucka (DETECTIVE COMICS) and James Robinson (STARMAN), the writers of SUPERMAN: WORLD OF NEW KRYPTON! Where has Captain Atom been all this time? And is he back on the side of good – or still on the side of evil? Find out here in an adventure featuring art by Cafu (VIXEN: RETURN OF THE LION).On sale July 15 • 40 pg, FC, $3.99 US
Jim: So if DC is going to raise the price to $4 on a lot of book at least they are giving us co-features for awhile (before they are dropped and the price stays the same). I’m curious to see how Captain Atom will be treated as he was the main bad guy in the horrible Countdown series that should have cost Didio his job.
Lee: At least DC tries to be nice. I hope it lasts.
Gwen: It's amazing how much comics are starting to cost now especially with so many webcomics out there. I wonder when it's going to all come tumbling down. Raising their prices in this economy isn't going to help keep readers. 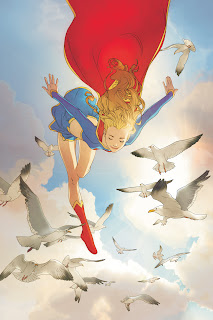 SUPERGIRL #43 Written by Sterling GatesArt by Jamal Igle & Jon Sibal Cover by Joshua Middleton
Things are going well for Supergirl – she’s back on New Krypton, and she’s even managing to patch things up with her mother, Alura. But when she goes to visit her older cousin, Superman warns her that not all is as it seems in the House of El… Setting the stage for next month’s crossover event in the SUPERMAN books!On sale July 22 • 32 pg, FC, $2.99 US
Lee: There is nothing I love more than a pointless cover. I have nothing against Supergirl flying amount the birds. It’s a good idea that’s been done a thousand times. But how about she fly with some eagles, or doves, or some other cool bird. Having her flying with seagulls, the winged rats of the sea, is just sad. Even pigeons are better than seagulls.
Jim: Lee loves to pick on the various covers. Still pointless covers are .. well pointless.
Gwen: Seagulls sound pretty cool though - it always reminds me of the beach. 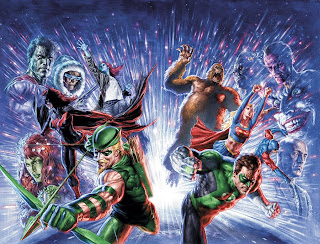 JUSTICE LEAGUE: CRY FOR JUSTICE #1 Written by James Robinson Art and covers Mauro Cascioli What brings a team together? Justice! Batman and Martian Manhunter have been slaughtered. But he’s not the only hero to fall at the hands of villains. The murder has to stop, and it’s time to take the fight to the bad guys! Green Lantern, Green Arrow, Supergirl, Atom, Shazam, Congorilla and Starman unite in a cry for justice!This 6-part miniseries from James Robinson (STARMAN, SUPERMAN) and rising star artist Mauro Cascioli (TRIALS OF SHAZAM) pushes our heroes to the brink and beyond as evil can no longer be tolerated to win. But when Prometheus plans his revenge on not only the heroes, but on the very places they call home, will this new team be ready to pay the cost for the justice they seek? This time it’s personal – and it’ll only get more bloody before it’s over! On sale July 1 • 1 of 6 • 40 pg, FC, $3.99 US
Jim: Not sure how this fits in with “Blackest Night” but apparently Green (Hal) Lantern is one busy guy right now. I know at first this was an on-going, but I’m still curious to see what it is all about.
Lee: I’m telling ya, it’s DC’s answer to Dark Reign.
Gwen: I think this type of "justice" has already been addressed in comics several times. I wonder if this will be any different. 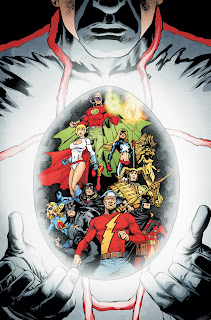 JUSTICE SOCIETY OF AMERICA #29 Written by Bill Willingham & Matthew Sturges Art and cover by Jesus Merino A new era begins for the Justice Society of America as writers Bill Willingham (FABLES) and Matthew Sturges (BLUE BEETLE) take over the series with new artist Jesus Merino (SUPERMAN ANNUAL) just as two new recruits make their debut with the team! Strange happenings at the JSA Mansion are weird precursors to an all-out attack on all members of the team — all but one! And what is the strange connection that new members King Chimera and All-American Kid might have with the turmoil?On sale July 29 • 32 pg, FC, $2.99 US
Jim: After Johns wrote this book forever I think having a fill-in writer for a couple of issues was a good idea as that way the new writing team had a little breather before being compared against Johns.
Lee: I liked Willingham & Sturges run on Shadowpact so they’ve proven they can write good superheroes. This should be good.
Gwen: I'm looking forward to this team on JSA.
PART 2 Coming Soon - Only on the Comics And.... blog.
Posted by Jim at Friday, May 15, 2009