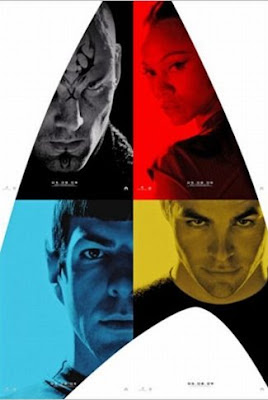 I have not had this much fun watching a movie in a very, very long time.


After a disappointing past few movie months (Watchmen being the only exception I can recall) Star Trek is a breath of fresh air. Now it's no secret that I'm a Star Trek fan. I grew up watching TNG as well as some of the classic Star Trek movies. It's fair to say that my opinion of this movie may be more than slightly biased. With that in mind, this movie was still fantastic!


The plot for this movie was brilliant. The movie starts out with a Romulan mining ship entering space through an unexplained anomaly. The Romulans attack the Federation ship investigating the anomaly. The ship is the Kelvin and not only is Kirk's father left in command but Kirk himself is being born in one of the shuttles evacuationg the ship. Kirk's father goes out in a blaze of glory. The important thing here is that the Romulans have come from the future. As the stage is slowly set to establish the Enterprise crew we all know and love we eventually find out (from Leonard Nimoy as future Spock) that Spock witnessed the destuction of Romulus. He was attempting to save them from a supernova but he was too late. Still he managed to use red matter to halt further destruction but the ensuing blackhole pulled both Spock and the Romulans looking for revenge after him. All of this changed the timeline and created an alternate reality - thus neatly explaining the changes from the original Star Trek.


This movie was a bit of an emotional roller coster on some levels. There were some very tragic moments. Kirk's father dying at the begining was heart breaking. The destuction of Vulcan and Spock's mother's death was horrifying. On the other hand it was balanced out by an equal amount of humor and familiar characters presented from a new perspective. I especially enjoyed Christopher Pike being the person who recruits Kirk. I think the best casting was young Spock. He did a great job acting the part. Also I enjoyed the added romance between Uhura and Spock. Honestly all the characters were really well done and there were a lot of humorous moments.


Overall this was a great movie and I'd recommend it to anyone. However if you're a Star Trek fan and miss this movie you are missing out on a great time.