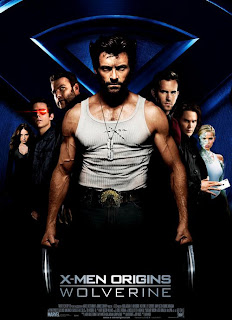 I just got around to seeing this movie Monday night and I have to say it was not bad. This was not a movie to make you really stop and think how great it was, but it was an entertaining movie. My wife, who is not a comic book person, enjoyed it also and that is always a big plus for me.

It was probably the most straight forward origin of Wolverine that we have ever seen and it incorporated a lot of Marvel’s continuity for the character. We see that he is born around 1845 and finds out his father is actually the guy who he thought was the servant of the household. James and Victor (Sabertooth) are half-brothers and both are immortal and very hard to kill. After James (Wolverine) kills his Dad, because his Dad killed who James thought was his Dad, Victor and James take off. They hang out together for the Civil War, WWI, WWII and the Viet Nam war and seem to be very good at killing people. It is after over 100 years that Victor started to get out of hand in Viet Nam and causes them both to be placed before a firing squad. Then Colonel Stryker recruits them and they are now with a bunch of other mutant agents. Logan (how he become Logan was not clear to me in the movie) had enough and quit the group.

The plot meanders from there but has Sabertooth apparently killing Silver Fox, Wolverine getting his adamantium, Wolverine having his revenge, freeing a bunch of X-Men who are saved by Professor X and Wolverine losing his memory. Gambit is in the movie and plays a big role as apparently every X-Men character have more ties then anyone ever knew. How much of this is actual Marvel continuity I don’t know because after 40 years and a billion stories about the same characters who can keep track.

As a straight up entertaining piece of movie making this was well done. The plot had holes in it that made little sense, but I believe that was more due to my being a comic book fan as my wife had no complaints in that regard. The story synched up well enough with the first X-Men movie and had enough of the comic book continuity in it to make it familiar but it also was off enough to cause me to not enjoy it as much as I hoped.

The problem was this movie was trying to do way too much, had too many characters in it and was trying to tie up way too many things into a nice neat package. It missed the mark as far as that goes, but still was a fun movie to watch.

Overall Grade B- Hugh Jackman does Wolverine so well that it is a lot of fun to see the character brought to life on the big screen.

FINAL GRADE C – I know giving the movie two grades is odd, but I have been considering how I rate movies and I rate them as what the experience itself was when I saw it and that is the B grade. Then I consider will I ever want to watch this movie again and then how many holes were in the plot and on and on. X-Men 3 was fun to see, but on two subsequent viewing of the movie it has continued to slid down in my opinion and is now almost a D. Wolverine should maintain a “C”, but I will not see it again until it is on one of the channels I have on my cable package for free and even then it will not be a priority. It was fun, it had some cool moments, but it is not one for the ages and is not a top comic movie.
Posted by Jim at Monday, May 04, 2009