Lee: Something different. Since my Marvel review was so… spirited shall we say… I am going to pick DH this month to cheer me up. Lucky you.
Jim: Now for those of your reading along at home, the Dark Horse July solicitations come out so early that Lee is referring to his June picks for Marvel. We get confused to with all the different timing. 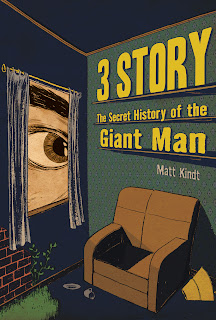 3 STORY: THE SECRET HISTORY OF THE GIANT MAN Matt Kindt (W/A)
On sale Sept 23FC, 192 pages $19.95 HC, 5 3/4" x 8 /14"
What would it be like to stand head and shoulders above everyone else--and to keep growing? Unable to interact with a fragile world that isn't built to withstand your size? To live in a house that doesn't fit you anymore--with a wife who doesn't either?
Craig Pressgang's life is well documented in his official CIA biography, Giant Man: Pillar of America, but the heroic picture it paints is only half the story. The continuous growth caused by Craig's strange medical condition brings a variety of problems as he becomes more isolated and unknowable. Told in three eras by three women with unique relationships with Craig, 3 Story follows his sad life from his birth to the present.* Kindt's Super Spy was Wizard's "Indie Book of the Year"!* Features special enhanced die-cut cover.
Lee: Kindt is one of my favorite indie type creators. Super Spy was a fantastic read! I can’t wait to get this.
Jim: I never picked up Super Spy, but both Lee and a friend Matt have sang the praises of that book, which tempts me to order this book, but I may wait until I hear a few reviews before taking the plunge. 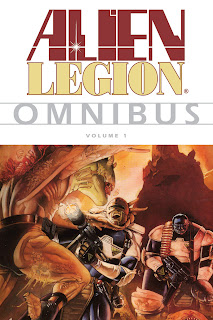 ALIEN LEGION OMNIBUS VOLUME 1
Alan Zelenetz (W), Frank Cirocco (A), Chris Warner (A), Terry Shoemaker (A), Terry Austin (A), and Randy Emberlin (A)
On sale Sept 9 FC, 352 pages $24.95 TPB, 6" x 9"
Footsloggers and soldiers of fortune, priests, poets, killers, and cads--they fight for a future Galarchy, for cash, for a cause, for the thrill of adventure. Culled from the forgotten and unwanted of three galaxies, they are trained to be the most elite, and expendable, of fighting forces. Sometimes peacekeepers, sometimes shock troops, the Legion is sent into the Galarchy's most desperate internal and external conflicts. Legionnaires live rough and they die hard, tough as tungsten and loyal to the dirty end.
Lee: These sc omnibus are so great. They’re packed with good stories, good art, and reasonably priced. I collected Alien Legion when it was originally released and remember it being very good. It’s very good science fiction if you haven’t heard of it.
Jim: Recently I did a short review of the first issue and a short interview with the creator Carl Potts which can be seen here. I have been re-reading this series and it is well worth your time and money. Think Foreign Legion in space, with tons of great characters and strong story telling. BERSERK VOLUME 31
Kentaro Miura (W/A)
On sale Sept 30 b&w, 208 pages $14.95 TPB, 5 1/8" x 7 1/4"
Escaping the port city of Vritannis is no easy task, for even the finest ship is useless if it can't be reached, and a horde of Kushan monsters stalks the city's docks. Led by a powerful necromancer who has mastered both the elements and the monsters of the deep, this hideous brigade may be too much for Guts the Black Swordsman and his companions to handle, even if Guts and Schierke are able to join forces and control the awful wrath of the Berserker armor. And will it even matter, if the Kushan emperor makes Guts an offer he can't refuse?
Lee: Yeah, I know this is volume 31 but I’m interested because it has been around for so long. I’m so frustrated with Marvel & DC these days that I’m willing to try anything. And that includes Manga. I won’t start with this volume but I’m going to start looking at these.
Jim: Let me know what you thing Lee. I want through my magna phase years ago and there is a lot of great material in the manga world. One thing I have learned is that worldwide there are a lot of great comic creators. 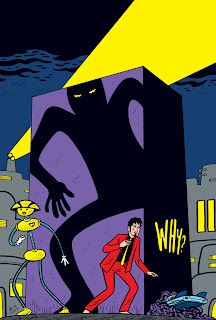 CITIZEN REX #1 (of 6)
Mario Hernandez (W) and Gilbert Hernandez (W/A)
On sale July 8b&w, 24 pages $3.50 Miniseries
"What compels life without a soul?"
Comics legends Gilbert and Mario Hernandez join forces to present a bizarre, sexy view of the future and what it means to be human. Twenty years ago, the most famous, lifelike robot in the world was engulfed in scandal, arrested, and deactivated. Since then, an anti-robot movement has developed, while body modification is in and prosthetic limbs have become hot, black-market items.
Stories like these are the stock-in-trade of gossip columnist Sergio Bauntin, whose startling revelations earn him the constant scrutiny of both the mob and the city's mysterious investigators, the Truth Takers. When Sergio catches wind of sightings of the long-missing robot celebrity CTZ-RX, all of these interests will collide in violence and intrigue.
It's sci-fi adventure with beautiful women by Los Bros. Hernandez!
Lee: Even though the Hernandez Bros are know primarily for the slice of life story, Love & Rockets, they’re very good Sci-Fi writers too. Their work always seems to be interesting. It’s tough to justify $3.50 for a B&W book but from the Hernandez Bros, I’m confident I will enjoy it.
Jim: And yet I have never gotten in the Hernandez Brothers work. I tried to read some of their work over the years and it never grabbed me, so I will pass on this book. 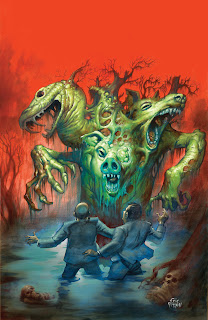 CREEPY #1
Neil Kleid (W), Joe Harris (W), Dan Braun (W), Mike Woods (W), Angelo Torres (A), Bernie Wrightson (A), Jason Shawn Alexander (A), Eric Powell (Covers), and others
On sale July 15b&w, 48 pages $4.99 Ongoing
What's black and white and clawing its way onto your reading list? It's the newly resurrected Creepy, of course! Now, don't fret, my putrid pets--these new terror tales are cut from the same cursed cloth as the outlandish originals, telling contemporary horror stories with gorgeously ghoulish art from a lineup that'll make you lose your head! Original Creepy artist Angelo Torres teams up with devilish Dan Braun on "Hell Hound Blues"; Michael Woods and artist Saskia Gutekunst serve up a dose of "Chemical 13"; Neil Kleid and Brian Churilla provide "All the Help You Need" at a weird weight-loss camp; and jaundiced Jason Shawn Alexander brings his phenomenal painting skills to Joe Harris's "The Curse"! Plus Bernie Wrightson, the return of "Loathsome Lore," and more. All this, plus one classic story from Uncle Creepy's dank dungeon, and you've got 48 freakish pages of terror to bring home to mummy!
Lee: Jim sent me a notice about this being released as soon as it was announced. I’m interested but I’m not sure I care. I’m glad to see the revival of a classic title, but I’m not sure I want to invest in a new anthology. I know Jim will get this so I’ll wait until he reviews it before commiting.
Jim: See this is a sad, sad commentary on the state of affairs we find ourselves in the world of comics. Now if Lee is unwilling to support something like this, then it really hurts this book chances of surviving as Lee is more willing to try anthologies then a lot of people. So I implore people to go out and order this book so it has a chance. 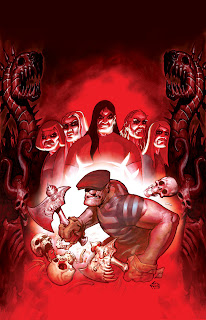 DETHKLOK VS. THE GOON
Eric Powell (W/A/Cover), Brendon Small (W), Jon Schnepp (Cover), and Dave Stewart (C)
On sale July 15 FC, 32 pages $3.50 One-Shot
"In the histories of fictions there is many historious meetings . . . Frankenmasteins meets the Wolfmans . . . Scooby-Doos meets the Globetrobbers . . . and of course the Godzilla meets the little fat black kids from Diff'rent Strokes. But those are all for the douches. Now . . . we have come to make crossovers metal. Be prepareded for the most brutal meetings of alls times! Dethklok versus The Goon!"
From Eric Powell and the creators of Adult Swim's Metalocalypse: since 2006, Metalocalypse has been bringing its special brand of dark comedy to the masses through the American/Scandinavian death-metal band Dethklok. And, since 1999, The Goon has contributed the best in bucktoothed zombie brawls to the world of comics. Now, the twain shall meet . . .
* Coming in late 2009 from Dark Horse--Metalocalypse the comics series!
Lee: Sadly enough I have to say “who?” I know the Goon but who is Metalocalypse? Maybe it has to do with the fact I don’t watch Adult Swim. Waaayyyy past my bedtime. I guess this will appeal to someone.
Jim: For a $3.50 one shot I will try this book out, but I’m on the same wave length as Mr. Lee is on this bad boy. Not sure if this is a book that I will care about or not. 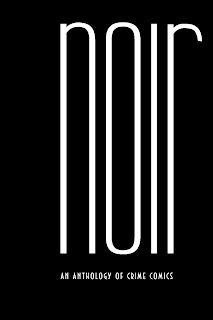 NOIR
Brian Azzarello (W), Ed Brubaker (W), Alex de Campi (W), Jeff Lemire (W/A), Rick Geary (W/A), Paul Grist (W/A), David Lapham (W/A), Dean Motter (W/A), Chris Offutt (W), M. K. Perker (W/A), Eduardo Barreto (A), Fabio Moon & Gabriel Ba (A), Sean Phillips (A), and others
On sale Sept 30b&w, 104 pages $12.95 TPB, 6" x 9"
The biggest names in comics crime fiction assemble for an anthology of original tales of murder and deceit, presented in glorious black-and-white!
Comics luminaries Brian Azzarello (100 Bullets), Ed Brubaker (Criminal, Sleeper), David Lapham (Stray Bullets), Rick Geary (A Treasury of Victorian Murder), Chris Offutt (HBO's True Blood), and Paul Grist (Kane) show why they're masters of the genre, while newer talents like Jeff Lemire (Essex County), M. K. Perker (Cairo, Air), and Alex de Campi (Smoke) reveal their surprising dark sides. Aided and abetted by some of the most gifted slatherers of thick, black India ink in the field, such as Sean Phillips (Criminal), Eduardo Barreto (Cobb), Dean Motter (Mister X), and more, this gang is headed straight for the bad parts of town, and you're invited along for the ride!
* The latest in Dark Horse's Eisner Award-nominated series of anthologies by top creators!
* Features original work by the greatest writers and artists in crime comics of the modern era!
Lee: While Creepy didn’t thrill me, this certainly does. Maybe because it’s a trade so I’m not committed to a monthly title. Whatever the reason, this has great names associated with it and I can’t wait to read it.
Jim: Creepy is not a monthly title Lee! I’m pretty sure Creepy will be quarterly. Noir is getting a lot of attention, from Criminal, Scalped, DC’s Crime Line, Marvel's Noir Line and now Dark Horse’s Noir. Since this genre has been one I have enjoyed this is an easy buy for me. Sounds like a strong line-up of some great talent.

Lee: This is what I needed. DH is definitely on top of its game this month and has great, great offerings. I can’t wait to get so many of these books.
Jim: Dark Horse is doing well but I was sad to see Rick Remender sort of leave for right now as he concentrates on his Marvel material because he added a lot to the Dark Horse line up.
Posted by Jim at Thursday, May 07, 2009